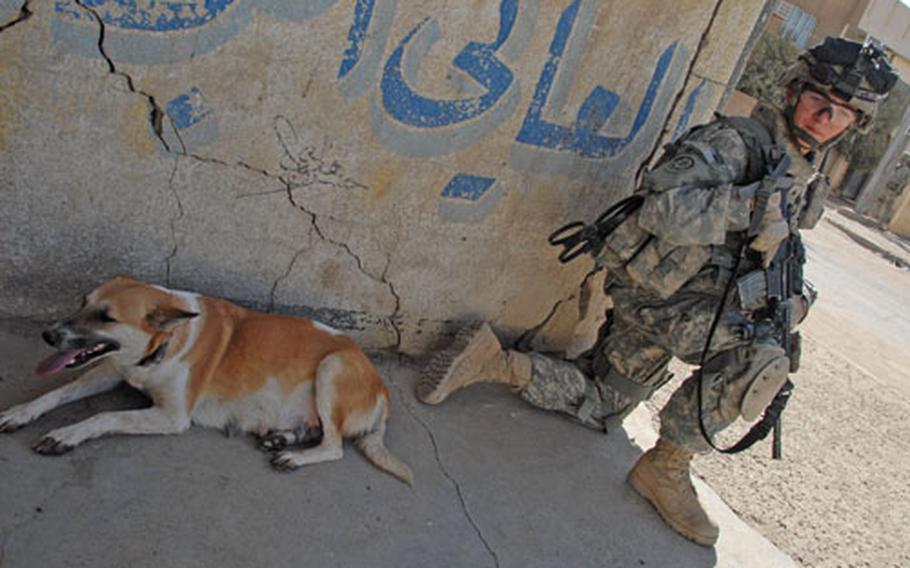 BAGHDAD &#8212; The dog lay on the floor at Combat Outpost Blackfoot, its head between its paws and a mournful look on its face.

Molly, an Iraqi dog living at the COP when soldiers from Company E, 2nd Squadron, 2nd Cavalry (Stryker) Regiment arrived in September, was on patrol with a platoon when it got into a firefight. One of the soldiers was wounded badly and the dog seemed to know it, recalled one of the Company E soldiers, 1st Lt. Fernando Pelayo, 24, of Wood Dale, Ill.

Soldiers seem to like having a dog with them when they head into southern Baghdad&#8217;s battle-scarred Hadar neighborhood. Molly walks ahead, growling at the wild dogs that roam the rubbish-strewn streets, keeping them away from the soldiers.

&#8220;In this area there are so many dogs. When we go out dogs see and hear us from a good distance away, but Molly does a good job keeping them away and making them shut up and keeping them quiet so they don&#8217;t give away our position,&#8221; Pelayo added.

If Molly is the dog equivalent of an Iraqi interpreter, the military working dogs that often accompany patrols in Iraq are the K-9 equivalents of professional soldiers.

Company H, 3rd Squadron, 2nd Cav soldier Staff Sgt. Ian Kriebel, 32, of Oaks, Pa., said military working dogs are highly valued by troops on the ground, although they are usually only with platoons for a day at a time.

&#8220;When you look for house-borne (improvised explosive devices) the dogs will sniff around. One time we saw a duffel bag and a dog confirmed that there were explosives inside,&#8221; he said.

The Army long ago recognized the usefulness of dogs in combat.

U.S. Navy Master at Arms James Bruno, 35, of Seattle, who oversees a kennel full of military working dogs at Camp Liberty in Baghdad, said dogs have served with the Army since World War II and many were killed in action in the Vietnam War.

According to Sgt. Vincent Sansone, 28, of Union, Mo., who serves with the 67th Engineer K-9 Detachment as a dog handler in Baghdad, dogs can help soldiers find explosives, ammunition and weapons.

His 3-year-old search dog, Kevin, spends most days honing his skills by hunting explosive training aids and weapons, he said.

The military working dogs are given ranks one level above their handlers. Kevin is a staff sergeant, Sansone said.