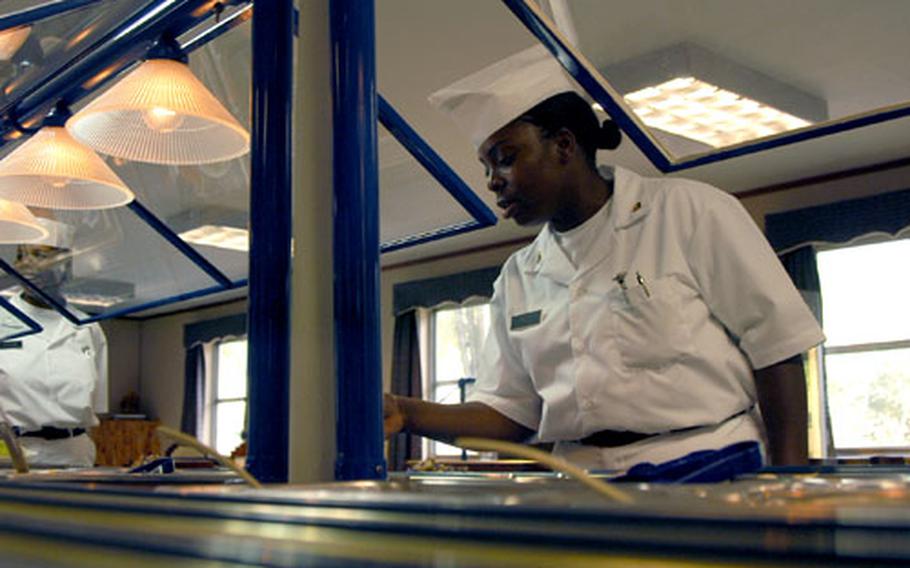 Spc. Tamica Tate, 31, of Indianapolis, looks over the salad bar she was in charge of assembling Thursday. It was 11:25 a.m., and she had already served breakfast that morning. When does she get to eat? “When all this is over.” (Teri Weaver / S&S)

Spc. Tamica Tate, 31, of Indianapolis, looks over the salad bar she was in charge of assembling Thursday. It was 11:25 a.m., and she had already served breakfast that morning. When does she get to eat? “When all this is over.” (Teri Weaver / S&S) 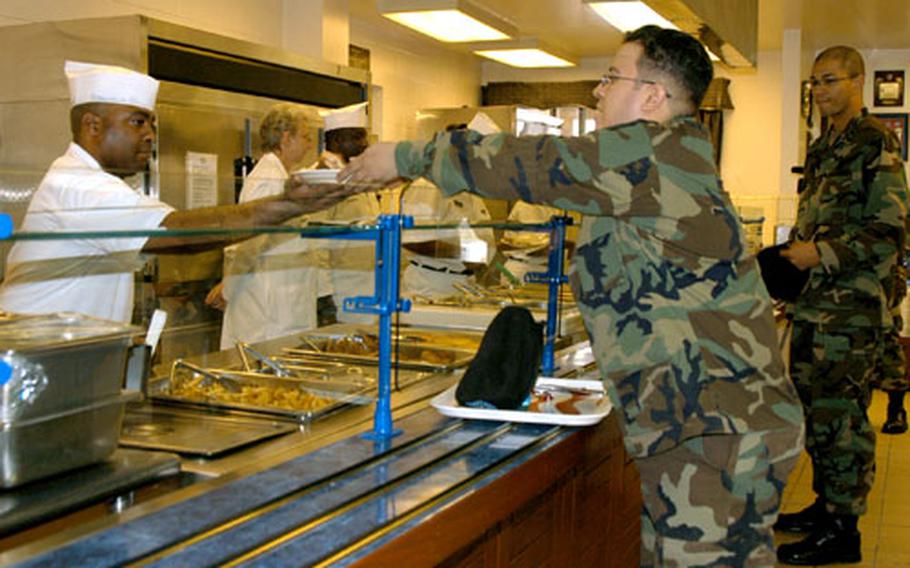 Spc. Jermaine Jackson, 32, of Talladega, Ala., hands a soldier his lunch. Jackson was in charge of the fryer and short-order cooked items Thursday, including chicken, fries and grilled cheese sandwiches. (Teri Weaver / S&S) 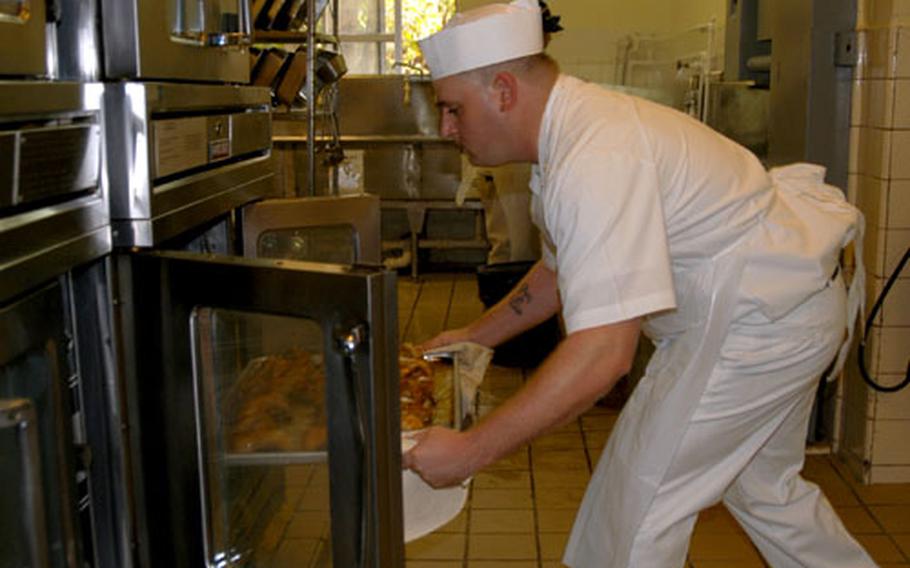 "Hot pan! Hot pan!" Spc. Christopher Yingling, 25, of Blackstone, Va., pulls a sheet of glazed cornish game hens from an oven to see how much longer they need to cook. (Teri Weaver / S&S)

CAMP COLBERN, South Korea &#8212; Spc. James Robinson talks trash about his broccoli. And don&#8217;t even get him started about the cornbread.

The cooks for the 304th Battalion, 1st Signal Brigade, know all about the cornbread and everything else prepared in their dining facility on Camp Colbern. The facility was recently named the best of all small garrisons in South Korea, and now the staff is competing with six similar facilities to see who is the best in all of the Army.

Three evaluators &#8212; two active-duty servicemembers and one former officer &#8212; were on hand for Thursday&#8217;s breakfast and lunch preparations and service.

&#8220;The ultimate thing we look for is customer satisfaction,&#8221; said Master Sgt. Jimmy Cunningham, one of the judges from the Army Center of Excellence Sustenance at Fort Lee, Va.

Other categories include kitchen safety, timeliness of preparation, sanitation, presentation and customer service, Cunningham said. He and the two other judges will visit bases in Europe and the United States before picking a winner and runner-up sometime toward the end of the year.

On Thursday, the kitchen at Colbern sounded more like a railway station than a culinary workshop. Freezers moaned, dishes clanged and water streamed over sinks, and soldiers shouted instructions and encouragement to each through the din. Moving hot food across the floor required shouts of &#8220;Hot pan! Hot pan!&#8221; with every step. Carrying a knife from one station to another prompted similar announcements of &#8220;knife, knife, knife, knife.&#8221;

Amid all that, a verbal rumble broke out over frying meat and steaming vegetables.

&#8220;You got the easiest job in the world,&#8221; Robinson baited Spc. Jermaine Jackson, 32, of Talladega, Ala., who was watching over chicken bubbling in a deep fryer.