Does fall of Ramadi degrade the sacrifice of those who fought, died there? 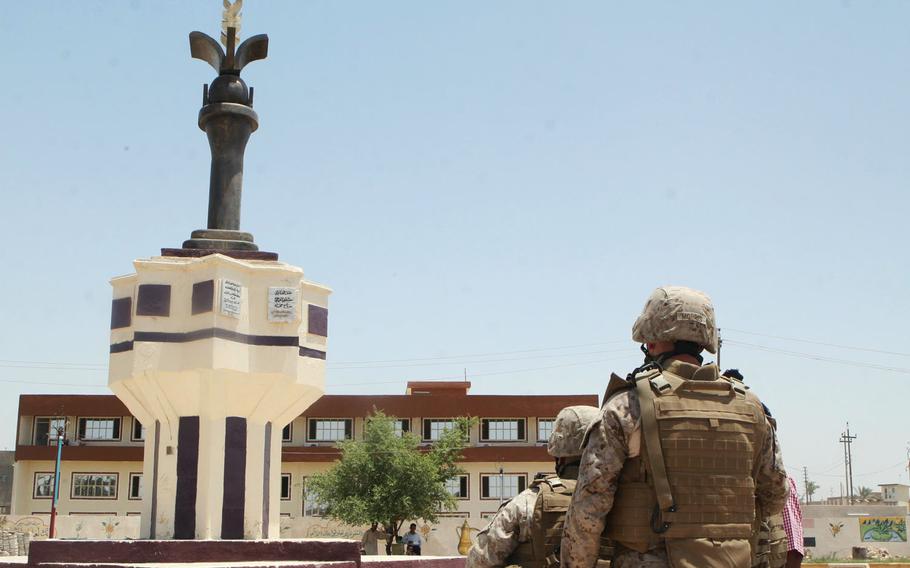 In this June 2008 photo, Marines gaze at a statue donated to the city of Ramadi by a local Iraqi contractor. The contractor built the statue in a park where a statue of Saddam Hussein once stood. The statue was meant to be a symbol of peace in Ramadi. (Jeremiah Murphy/U.S. Marine Corps)

WASHINGTON — Since Islamic State militants planted their black and white flag in the center of Ramadi, Iraq, veterans of the bloody battles that American troops fought to stabilize the city have expressed anguish, frustration and anger at what is the latest sign of unraveling in a country in which almost 4,500 U.S. troops died during a controversial eight-year military effort.

Daly, the author of the Iraq memoir “Rage Company,” still holds out hope that the Iraqi military and tribesmen can take back Ramadi with American help. But he fears that if things in don’t turn around, those who fought in Iraq will feel like their Vietnam veteran brethren, many of whom say their friends died for nothing.

“It degrades the sacrifice of those who were killed and wounded,” Daly said.

In an echo of the last war in Iraq, the White House and Pentagon have put out relentlessly upbeat battlefield assessments of their efforts to roll back the Islamic State, even as militants take territory and Iraqi Army units crumble. On Friday, a Marine general insisted the Islamic State is “losing,” and on Saturday, it was confirmed that Ramadi, just 70 miles from Baghdad, had fallen. The news got worse this week with reports that Iraqi soldiers fled the city rather than defend it.

Ramadi, along with Fallujah — another city infamous for violence — lie in Anbar province, where more than 1,300 U.S. troops lost their lives during the Iraq War.

Some veterans expressed horror at the possible fate of the Iraqis who joined the so-called Awakening, when Sunni tribesman, some who once worked with insurgents, joined the Americans in a reversal that turned the tide in the war.

“In reality, there’s good people there who are dying because we abandoned them,” said Joshua Revak, a former Army specialist who was wounded by a mortar in Ramadi in 2006 that killed his friend and roommate, Sgt. Terry Lisk.

Daly, who worked with Awakening members and has kept in touch with some since leaving Iraq, said they painted a grim picture of events as the Islamic State moved in. One leader he worked with was kidnapped and burned alive, and the last tribesman he was in touch with went silent two weeks ago — he still doesn’t know his fate.

“It’s just depressing, man — I mean, how can you let that happen?” Daly said.

Many troops took to social media, and some penned opinion columns to lament the loss.

“Thinking and hearing about it. ... I have tears in my eyes, our brothers and sisters we lost, for what,” one person posted on the Facebook page of Veterans of Ramadi, Iraq. “Yes we did our best and we did one hell of a job but it feels like only those who were there care and no one else does, not our government, our neighbors, media and in part the world.”

Another posted, “It sickens and saddens me to know that all of the brave men and women who lost their lives in the defense of the city did it all in vain. Just so ISIS can take it away.”

Others took a more measured approach. Writing for the Washington Post’s Checkpoint blog, former Marine Semir Muratovic, who served in Ramadi, said that the idea that a servicemember’s sacrifice is wasted if things go wrong in the area they once patrolled makes him “cringe.”

“As someone who accepted the risk of death when I took the oath, I cringe at the notion that a death is made more noble if the battlefield I were to fall on is left untouched,” he said. “I would hope my mission, and my achievements, would take priority over real estate,” he wrote.

Matt Millham contributed to this report from Kaiserslautern, Germany.