Dodgeball, surging in popularity, makes its way to Aviano Air Base 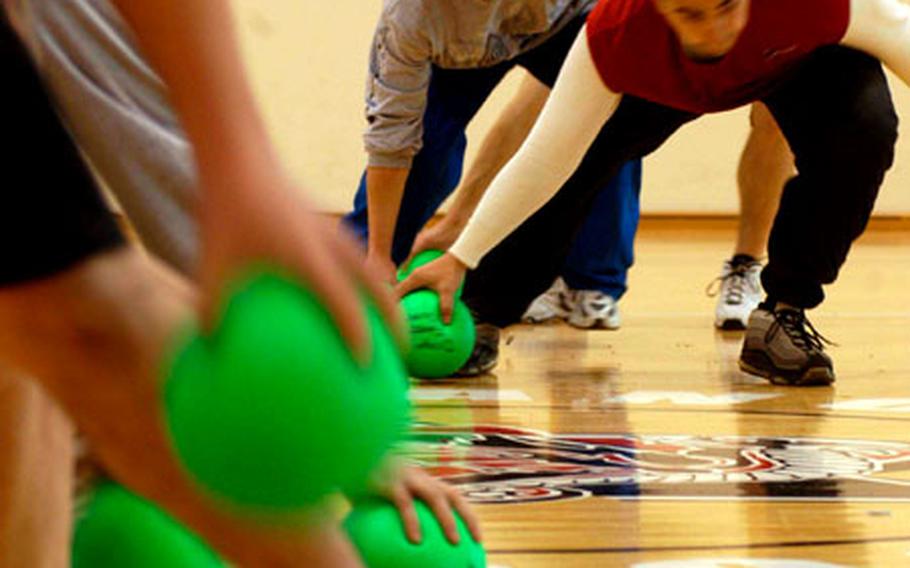 The race is on Saturday as opposing teams sprint to the middle of the court to pick up green neon balls during a dodgeball tournament at Aviano Air Base. (Kent Harris / S&S)

But that wasn&#8217;t too surprising, considering that those participating in a dodgeball tournament Saturday at the base fitness center hadn&#8217;t played the sport in a while.

Thanks mainly to the movie starring Ben Stiller and Vince Vaughn, the game has recently gained popularity with adults. Several U.S. Air Forces in Europe bases have had tournaments. On Saturday, the two base gyms in Aviano featured 22 teams tossing neon green balls at one another.

That&#8217;s one change that several participants talked about. Most remember a larger, red ball.

And while some played a more open game growing up, there were rules Saturday: Six players on each team. Six balls, placed in the center. Stay within the white lines of the volleyball court unless retrieving a ball.

Stay beyond the red line when throwing. No targeting above the shoulders. Get hit with a ball and you&#8217;re out. Catch the ball and the thrower is out.

Robby England, the base sports program director, said most of the rules came from the Internet. The tourney was put on under the auspices of Project Cheer and sponsored by the fitness center at the Aviano Top 3 club.

While most of those participating were young and male, there were exceptions. The 31st Medical Group entered a team mostly made up of women.

And a group of mostly older airmen from the 31st Civil Engineer Squadron (maintenance engineering) made it all the way to the finals before losing.

The probable favorites, though, ended up winning. The biggest challenge a team from the 31st Security Squadron seemed to have was spelling.

Its team name, Centurions, was mangled repeatedly throughout the tournament bracket. However it was spelled, it kept on getting posted in the winner&#8217;s spot.

That might not have been the case before the final round, but it certainly was when the last opponent was eliminated.

England said those hungering for revenge will probably get a chance in March.