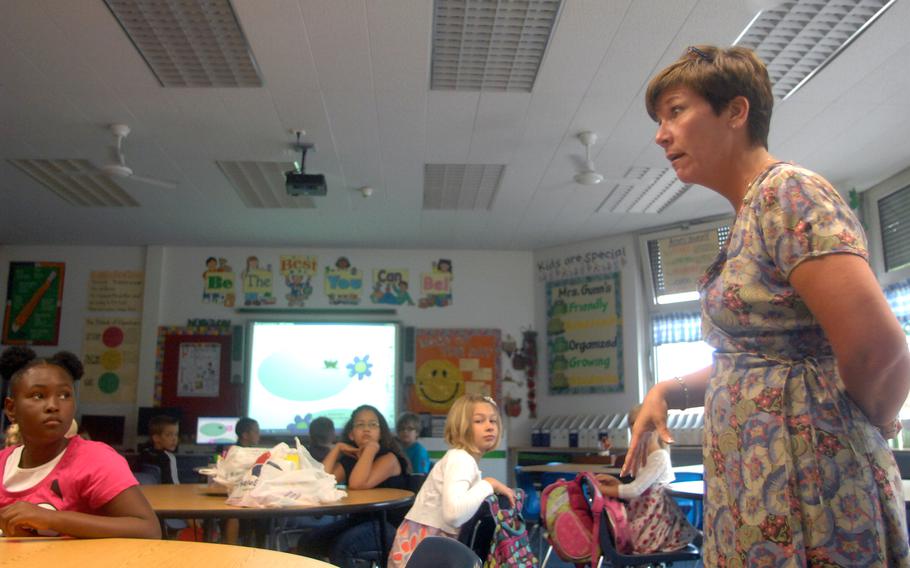 Teresa Gunn instructs her new class at Vilseck Elementary School in southern Germany on the first day of school on Aug. 27, 2012. (Steven Beardsley/Stars and Stripes)

Teresa Gunn instructs her new class at Vilseck Elementary School in southern Germany on the first day of school on Aug. 27, 2012. (Steven Beardsley/Stars and Stripes) Kristine Cephus, a first-grade teacher at Vogelweh Elementary School in Kaiserslautern, Germany, talks with her students on the first day of school on Aug. 27, 2012. (Jennifer H. Svan/Stars and Stripes) 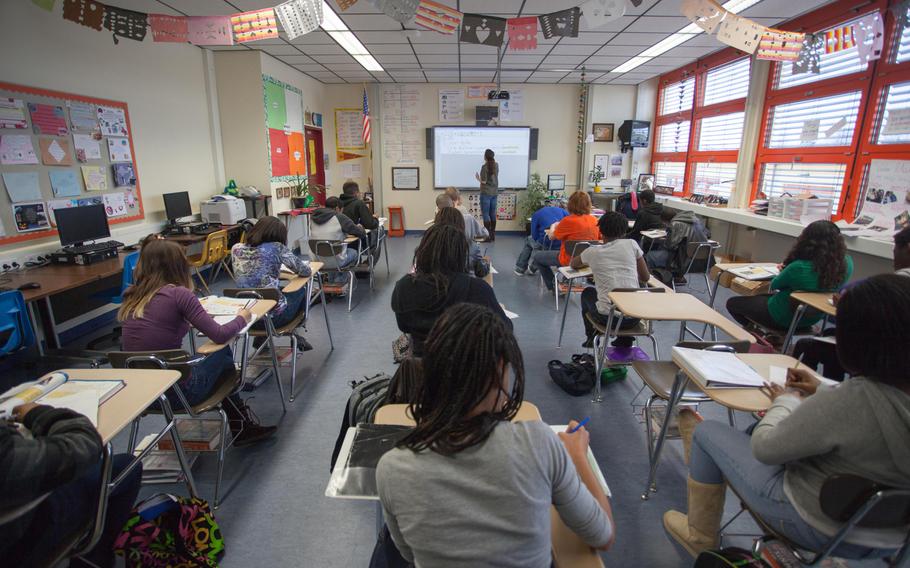 GRAFENWÖHR, Germany — In more than 35 years of teaching, Rhoda Wilner says she’s experienced few school years as frustrating as this one.

Teacher of an elementary school gifted-learning class on this remote Army post, Wilner is one of thousands of military educators facing days of forced leave time without pay due to massive defense budget cuts.

Though she’ll lose money from her own pocket, Wilner says she’s more concerned about the broader message being sent.

“The furlough is saying that we talk that education is important but we’re not really supporting it,” she said. “That’s what it feels like to me.”

She’s not alone. Teachers coming to terms with the likelihood of school closures, lost pay and crammed curriculums in the coming months say the current crisis marks a low point in their careers, not only for its impact on their wallets but for the interruption to an education system that has endured wars, government shutdown and even a massive earthquake and subsequent nuclear disaster.

While they represent only a small portion of the nearly 800,000 DOD civilians facing lost time and pay, many educators argue their role is more essential than others.

“I think you could say we’re baffled that they think they can play with children’s education,” said Terese Sarno, a union representative and longtime teacher in the Kaiserslautern, Germany, area. “Let’s face it, it’s one thing to have someone out of an office, and they can get to their paperwork when they get back. You can’t do that with education. Every day counts.”

Current Pentagon plans call for employees to be subjected to as many as 14 furlough days between June and Sept. 30, the end of the fiscal year.

The furloughs appear to be the first in the history of Department of Defense Education Activity to affect school-level employees, according to DODEA spokesman Frank O’Gara. A government shutdown in 1995 only affected administrative employees, he said.

Teachers argue that education has always been preserved during difficult times. Many point to the 2011 nuclear disaster in Japan, where educators were kept in schools even as families evacuated.

“Part of the reason we’ve been mission critical all these times, all these places, is essentially, we’re the only piece of calm in some of these kids’ lives when their parents are deployed around the world and elsewhere,” said Richard Edmonds, a teacher at Sembach Middle School and a local union secretary.

But, with the exception of a few dozen educators in Bahrain — which is defined as being in a combat zone — teachers will not be exempted this time around, according to Cmdr. Leslie Hull-Ryde, DOD spokesperson for personnel and readiness.

“DoDEA teachers are not exempt from furloughs under sequestration,” Hull-Ryde said in an email message sent last month to Stars and Stripes.

Defense officials say they are still trying to mitigate the effects of furloughs on school, promising accreditation will remain unaffected, and summer school will run as planned.

Advanced placement exams, end-of-year and end-of-course exams and spring sports will also go on as scheduled, she said.

Schools will close on furlough days, DOD spokeswoman Cynthia O. Smith said, adding that officials are still assessing the number and structure of those days.

Teachers are scheduled to begin summer vacation by mid-June at the latest and will likely begin the new school year in mid-to-late August, leaving little time for furlough days before the Sept. 30 deadline.

Nearly three weeks of lost instruction would be severe, considering most schools run between 180 and 175 instruction days, according to Annette Bohling, chief accreditation officer at AdvancED, which certifies DODEA schools. But Bohling said defense officials have time to look at and consider solutions, including lengthening school days to make up for missed furlough days.

“You organize and reorganize your schedule so kids are not the losers,” she said.

With defense officials saying little about how furloughs will be structured, teachers remain skeptical about how their curricula will be squeezed into a shortened school year. Some say they already lack the time needed to deliver their lessons.

Others wonder how the measures will affect requirements for special needs children, graduating seniors and childcare for working parents.

Maria DupreeLynn, who educates special-needs children in South Korea, said she worries most for her students.

“Our kids don’t do well with transitions,” she said. “They need a schedule to know what’s going on.”

Military families are also waiting to see what happens, according to advocacy organizations.

Joyce Raezer, executive director of the National Military Family Association, said the effect of furloughs on the quality of education and childcare are among the biggest concerns they hear from families.

Kristie Blackman, an Army spouse in Grafenwöhr and a civilian employee anticipating being furloughed in the coming months, said she’s more concerned about the effect of teacher furloughs on schools.

“These children are our future,” she said. “They obviously need a good education and need to be in school,” she said.

Wilner, 58, began teaching in military schools in 1999 following a career in the U.S. school systems. She enjoys the benefits of the position, the travel opportunities and the chance to work with military children, she said. But the current crisis, preceded by the recently extended federal pay freeze, and recent funding scares have made the past few years some of the most difficult in her career, she said.

She fears a disregard for education and teachers has carried over into the wider public, and she cites a Stars and Stripes article in which some commenters lashed out at defense teachers they claim have cushy benefits. Wilner says she and other teachers routinely spend personal money on supplies and stay late working at schools.

“This is a great job for a teacher,” Wilner said. “I’m very thankful that I have it. And I enjoy all the benefits that come with it. But I know I’m here to teach, and that’s my priority.”