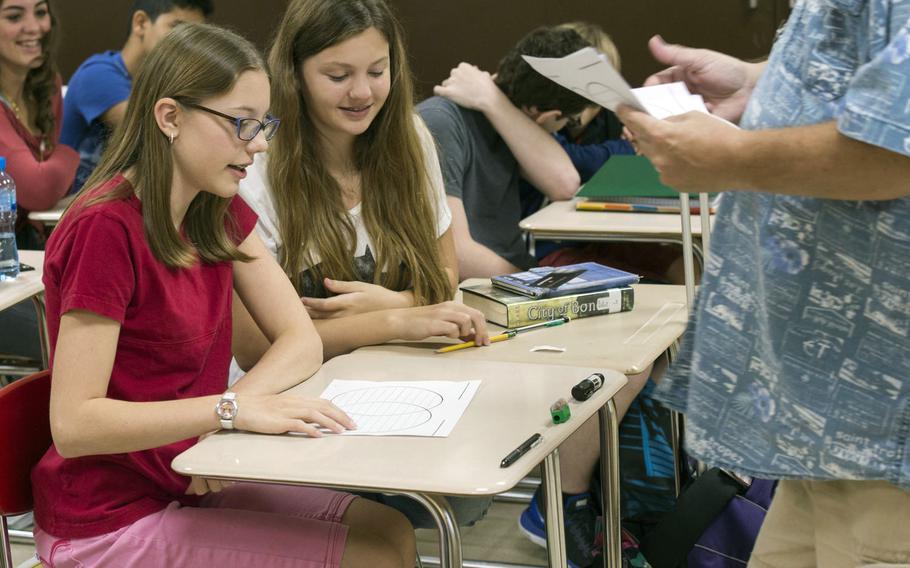 Buy Photo
Eighth-grade students at the Bahrain school work on an assignment on Thursday, Aug. 27, 2015. DODEA eighth-graders in 2017 led the nation in the latest national reading assessment released this week. (Stars and Stripes)

KAISERSLAUTERN, Germany — The latest national test results show that U.S. military students are right up there with academic powerhouse Massachusetts.

Scores from the 2017 National Assessment of Educational Progress exams were released Tuesday, and the Department of Defense Education Activity held its own against the state that traditionally outperforms the nation in student assessments.

Also known as the Nation’s Report Card, NAEP is the largest ongoing assessment of what U.S. students know and can do. The latest results reflect math and reading scores of 585,000 fourth- and eighth-grade students in districts and states across the country who took the test.

DODEA was near the top in the other NAEP categories. The school system’s fourth-graders scored second in the nation in reading — behind Massachusetts — while DODEA eighth-graders tied for third with New Hampshire in math, after Massachusetts and Minnesota.

“We are extremely proud of our students’ performance” on the 2017 NAEP math and reading assessments, Brady said in a statement.

“Our students’ strong performance was especially significant in light of the fact that this was the first year of digitally-based administration of the NAEP assessments in our schools,” Brady said.

Last year’s administration of the assessment was the first to be conducted digitally. About 80 percent of students in 2017 took the test on digital devices, while 20 percent used traditional pencil-and-paper tests, according to Education Week.

Collectively, students’ scores across the nation remained flat, showing little change from 2015, when the tests were last given.

But DODEA students increased their average scores in all subjects, except for fourth-grade reading, where the average score remained at 234 on NAEP’s 500-point scale.

Here is a further breakdown of some of the DODEA results: