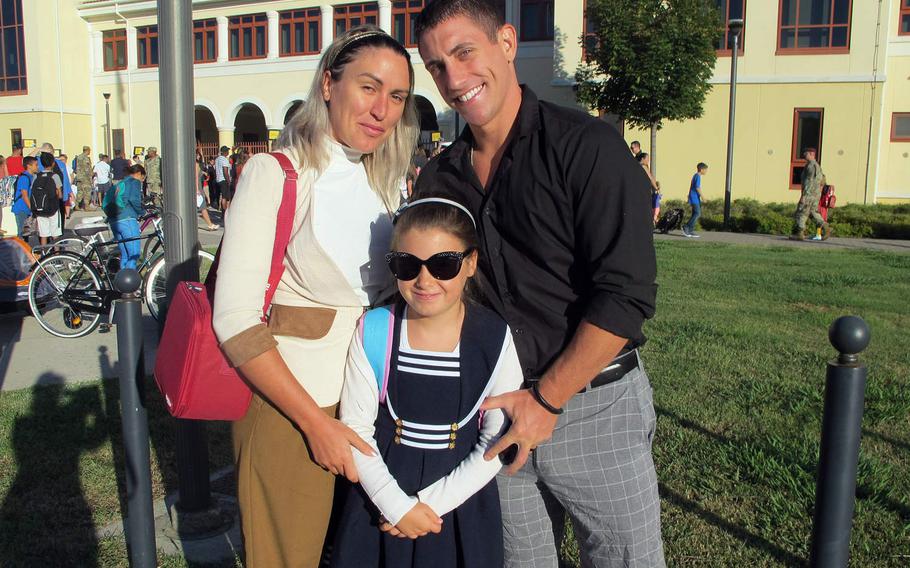 Buy Photo
Spc. Jarred Mertz, his wife, Eleonora, and daughter, Sofia, were stylish on the first day of school - and the first day of American school for Sofia. Sofia, 7, was previously a student in Italian school, but her parents wanted to prepare her for an eventual move to the U.S. (Nancy Montgomery/Stars and Stripes)

Buy Photo
Spc. Jarred Mertz, his wife, Eleonora, and daughter, Sofia, were stylish on the first day of school - and the first day of American school for Sofia. Sofia, 7, was previously a student in Italian school, but her parents wanted to prepare her for an eventual move to the U.S. (Nancy Montgomery/Stars and Stripes) 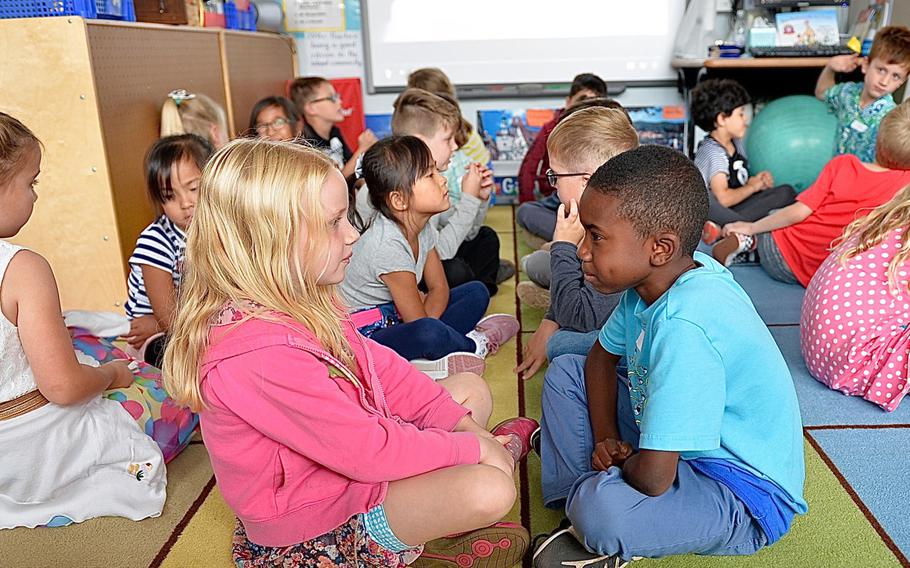 Buy Photo
German immersion teacher Gabriele Arseneault talks to Landstuhl Elementary/Middle School students about a book her class read together on the first day of school. (Will Morris/Stars and Stripes) Buy Photo
The Alvarez family poses in front of Vicenza Elementary on the first day of school. The family arrived recently from Washington state. ''It's off to a great start,'' said Kaitlyn, 9. ''I'm nervous,'' said Nysa, 11. Also pictured are Madisyn, 6, Lauryn, 4 and parents Mercy and Mario. (Nancy Montgomery/Stars and Stripes) 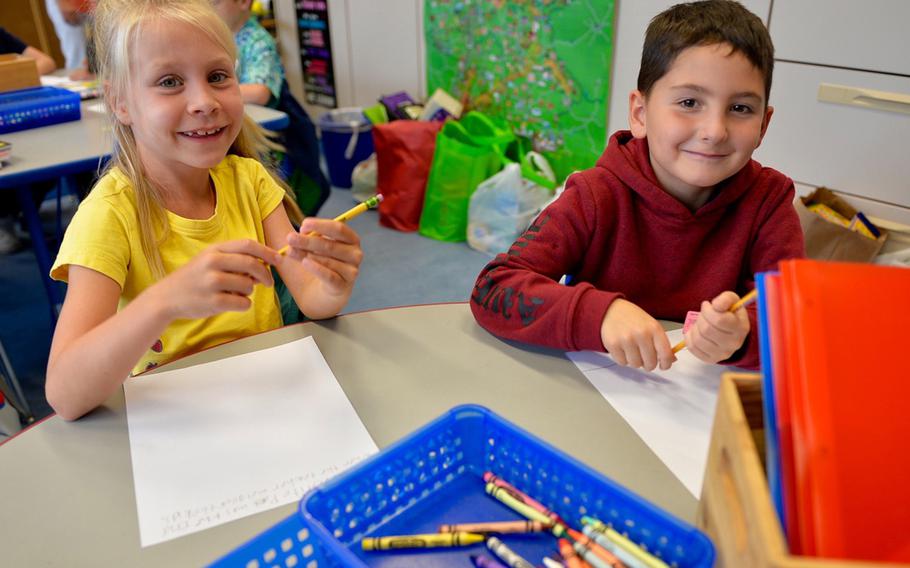 Buy Photo
Mary Kate Feldt and Rylan Gonzalez, both 7, sit next to each other in a German immersion class at Landstuhl Elementary/Middle School, Germany, Monday, Aug. 27, 2018. (Will Morris/Stars and Stripes) 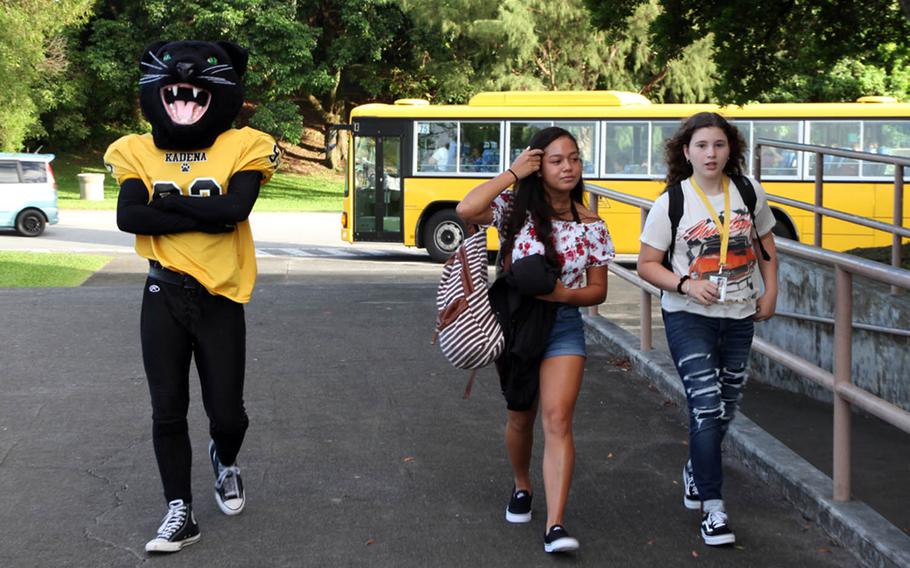 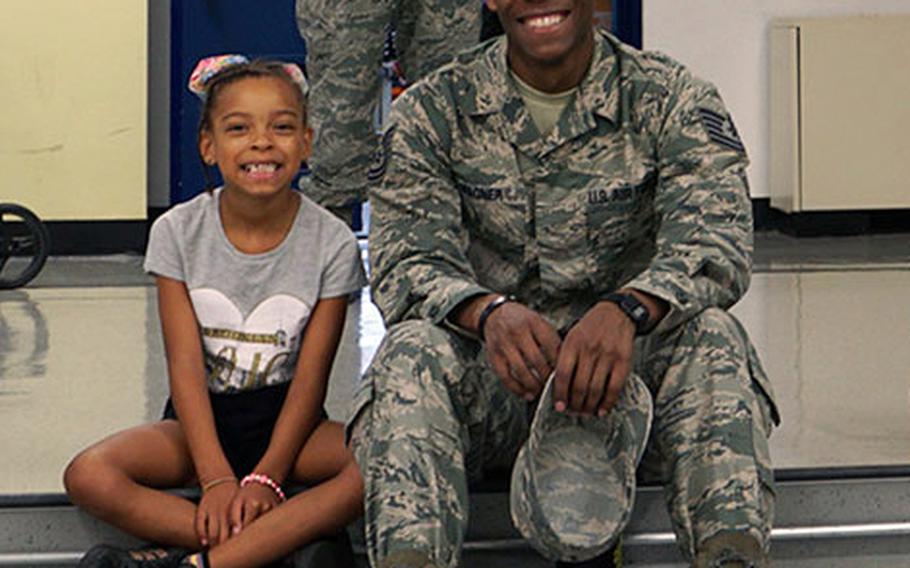 Buy Photo
A parent and student wait for a back-to-school assembly to begin at Joan K. Mendel Elementary School on Yokota Air Base, Japan, Monday, Aug. 27, 2018. (Leon Cook/Stars and Stripes) 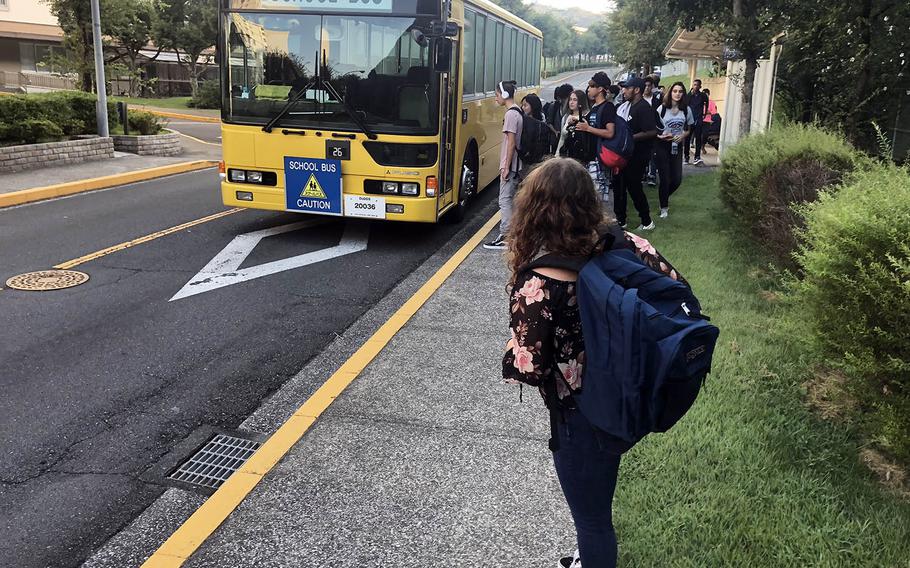 The streets of overseas military bases were lined with buses Monday morning as Department of Defense Education Activity students returned from their summer break.

For military children, the first day of class is often the first day at a new school altogether. Such was the case for 17-year-old Marissa Fowler, who said she was nervous to begin her senior year at Nile C. Kinnick High School on Yokosuka Naval Base, Japan.

“I have bad anxiety. But because I move so often, I’m better at socializing – even though inside I want to puke,” she said. Kinnick is Fowler’s sixth school, and her family has moved 14 times for her father’s Navy career. She and her parents, Senior Chief Petty Officer Chris Fowler and Jennifer Fowler, came to Japan in June.

With college around the corner, Marissa Fowler was happy to find out about a new online program DODEA is rolling out this year to help parents and students navigate the college and scholarship application process.

Choices360 – available to grades 7 through 12 – offers lessons and activities to help students “learn how to transform their interest and goals in plans for life after high school,” a DODEA statement said.

DODEA Director Thomas Brady told Stars and Stripes in a phone interview Friday that the tool is a “wonderful sweep of programs that help parents and students prepare for life after K-12.”

“It’s a great enhancement to our career counselors in our high schools,” he said.

In line with that vision is the department’s College and Career Readiness curriculum – similar to Common Core – that DODEA has been rolling out since 2014, Brady said. He added that CCR teaches collaboration and other skills sought by modern employers.

“National research indicates that they’re looking for employees who can work collaboratively and find solutions, work as a team …” Brady said. “In this 21st century learning [environment] where you have student-focused training and learning, kids are doing the problem solving.”

Brady said the national CCR standards offer new ways for students to approach school subjects to promote such skills. “In mathematics for example, we don’t memorize multiplication tables anymore. We don’t just do the formulas,” he said. “We teach the children the theories behind it, so they can explain it and they understand it.”

A standard approach With CCR comes new standardized assessments to be given to certain grades at the end of the school year to review whether standards are being met. DODEA was not required to comply with national annual assessments under No Child Left Behind, Brady said, so the concept is relatively new to the schools.

The first tests were given in the spring, and Brady said this year’s results will offer a “baseline” to determine where each school’s strengths and weaknesses lay. He said the results will help teachers understand their effectiveness.

Unlike some education departments, DODEA assessments won’t be tied to student graduation requirements and “the teacher’s value and worth” will not be based solely on the results.

“It’s not punitive, it’s informative, and I think it will serve us very, very well,” Brady said.

“I’m excited for making new friends,” Kyra said of starting fourth grade. “I’m excited for multiplication because that’s what I can do.” She worried, though, that her class would be too large.

“It’s very exciting, but since I don’t like being crowded by people, I get shy,” she said. “It would be OK if it was a small class.”

When the Jacobs family reached school later that morning, the siblings were greeted by their teachers, swarms of students and a Navy band playing patriotic tunes. Their little brother, 5-year-old Moises, will begin next week when kindergarten starts.

At Kadena High School on Okinawa, students stomped their feet through a morning assembly to the sounds of Queen’s “We Will Rock You.” The school’s panther mascot played air guitar.

Teachers entered like a football team at a pep rally and were greeted by raucous applause. Principal Kristopher Kwiatek wished the them success in the new school year.

In South Korea, rain canceled recess at Humphreys West Elementary School, but that gave students more time to make new friends, meet their teachers and get over first-day jitters.

“I was scared that I was going to have a mean teacher, but she’s nice,” said fourth-grader Isaac Alexander,9.

The school opened last year alongside Eighth Army headquarters, which moved 40 miles south from Seoul to sprawling Camp Humphreys, along with thousands of troops and their families.

Third-grader Lillian Song, 8, who was part of that move, was impressed by the size of the building, which serves nearly 600 students. “The school is so big,” she said.

In Vicenza, Italy, home of the 173rd Airborne Brigade and U.S. Army Africa, it was the first day in a new school for Sofia Mertz, 7. She spent the first two years of her schooling in an Italian school and can speak English, Italian, and, she said, "a little bit of French."

Her dad, Spc. Jarred Mertz, said that he and his wife Eleonora had decided move Sofia to the base school to prepare her for an eventual move to the United States.

At Landstuhl Elementary/Middle School in Germany, Mary Kate Feldt, 7, said she loved going back to school.

"Wow, is it possible to be scared in first day of school?" Feldt asked.

Her classmate and friend Rylan Gonzalez, 7, said it was — he had a little case of the first day jitters. "I don't know much about the 2nd grade," Gonzalez said.

Not all overseas DODEA schools started classes on Monday. A few exceptions were made in other grades because of new changes in the 2018-19 school year, including the addition of six new schools across Europe and Asia.

DODEA schools in Seoul will have a late start to allow them to adjust to downsizing after U.S. Forces Korea moved its headquarters from Yongsan Garrison to Camp Humphreys as part of a long-delayed plan to relocate the bulk of American forces south of the capital.