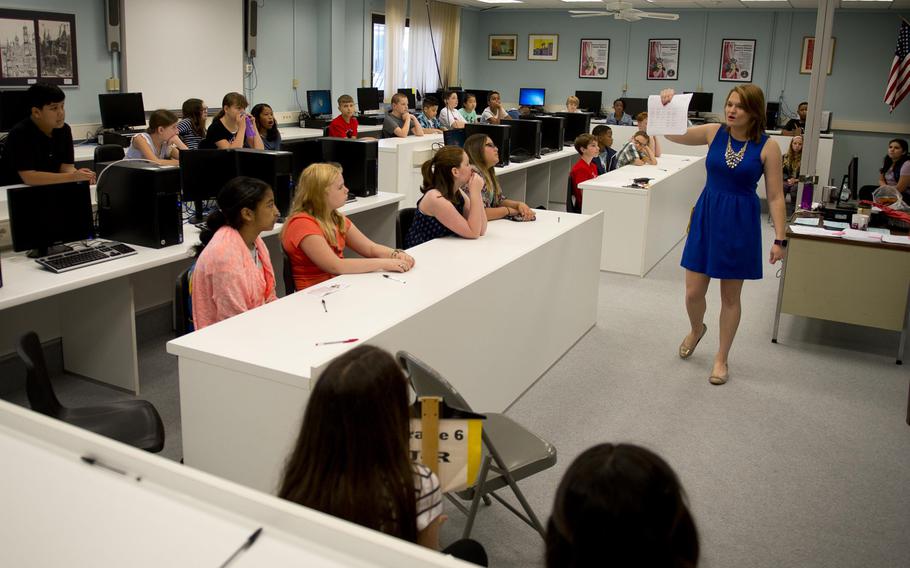 Buy Photo
Sixth-grade students receive their schedules during the first day of school at Kaiserslautern Middle School at Vogelweh, Germany, on Aug. 29, 2016. DODEA says it can begin filling vacant teaching and other staff positions, after its request for an exemption to the federal hiring freeze was approved. (Michael B. Keller/Stars and Stripes)

KAISERSLAUTERN, Germany — The Department of Defense Education Activity plans to resume filling teaching and other staff vacancies at its schools, now that its request for an exemption from the federal civilian hiring freeze has been approved, school officials said Monday.

DODEA also requested an exemption for other staff, including those working in headquarters and district superintendent offices, such as research specialists, program analysts and instructional systems specialists, he said.

The agency was informed on Friday that its exemptions had been approved by the Defense Department’s assistant deputy chief management officer, O’Gara said.

DODEA human resources “will immediately resume processing recruitment and hiring actions for teachers on Monday,” O’Gara said in an email. He added that recruiting initiatives suspended due to the freeze “will go forward to completion as soon as possible.”

In late January, President Donald Trump ordered a 90-day halt to the hiring of federal employees. The Pentagon later outlined an exemption process for certain positions. Agencies were required to submit justifications for any exemptions they were requesting.

In early February, DODEA said it would seek hiring exemptions that would allow it to maintain full operations at the 73,000-student school system. Prior to obtaining the exemptions approved, the agency could not hire for any vacancies, including substitutes.

Overall, however, the effects of the freeze on school operations were minimal, officials said.

“It hasn’t been anything we haven’t been able to handle,” said Harvey Gerry, DODEA Europe chief of staff.

“We do have some locations where it’s more difficult to find substitutes and have a ready pool on board, depending on the location,” he said. But “we haven’t had to stop instruction under any circumstances.”

O’Gara said DODEA during the freeze was still able to recruit for positions and process applications, everything short of making job offers.

“We have candidates in the pipeline that we’ll be able to bring on board immediately,” he said.