DODEA schools ban 'e-cigs,' with punishment up to expulsion 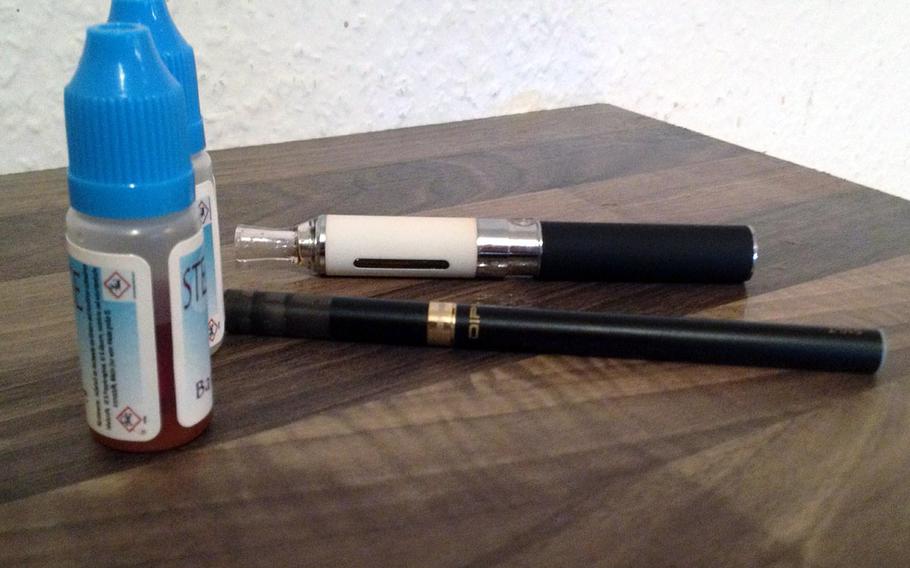 Electronic cigarettes, or e-cigs, can be found a smoke shops in many cities in Germany and other European countries. The battery-powered devices, which turn flavored liquids into a vapor that is inhaled, have been added to the list of prohibited items at Defense Department schools in Europe and the Pacific. (Sam Amrhein/Stars and Stripes)

Electronic cigarettes, or e-cigs, can be found a smoke shops in many cities in Germany and other European countries. The battery-powered devices, which turn flavored liquids into a vapor that is inhaled, have been added to the list of prohibited items at Defense Department schools in Europe and the Pacific. (Sam Amrhein/Stars and Stripes) 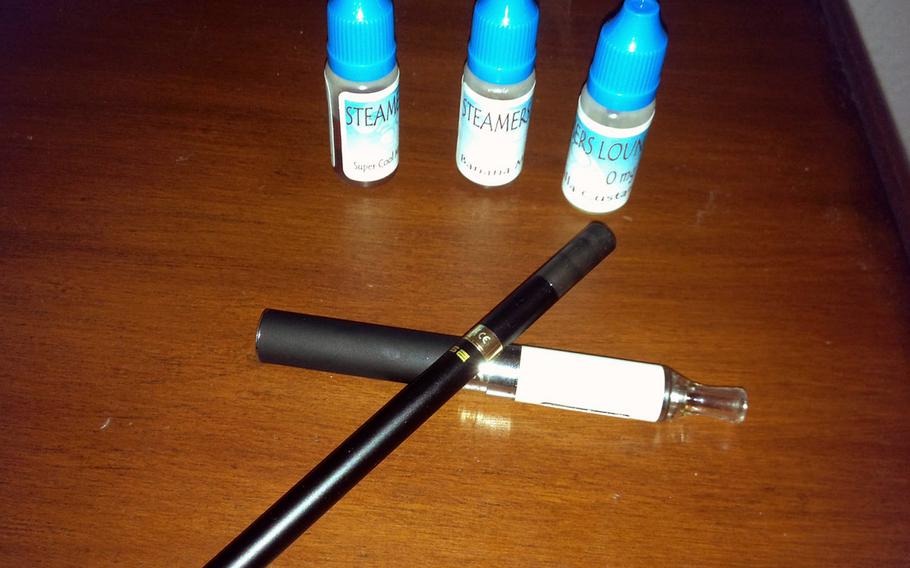 Many electronic cigarettes, or e-cigs, could be mistaken for a pen, while others might be confused for drug paraphernalia. The battery-powered devices, which turn flavored liquids (shown here) into a vapor that is inhaled, have been added to the list of prohibited items at Defense Department schools in Europe and the Pacific. (Sam Amrhein/Stars and Stripes)

So far, reports of e-cigarette use among Defense Department Education Activity students on school grounds are sporadic, with only two incidents in Europe and one in Pacific.

But under the new rules, students caught with the devices could face discipline — up to and including expulsion from school — according to school officials in Europe and the Pacific.

Kaiserslautern High School in Germany appears to be the first DODEA school to modify its school rules to specifically ban the product, which is commonly called an e-cig. Earlier this month, Kaiserslautern administration officials notified parents that its student handbook had been revised to prohibit students from using or possessing e-cigarettes anywhere on school property, or at any time during school hours even if not on school property.

“Specifically, the possession/use of e-cigarettes (sometimes referred to as hookah pens or by other terminologies) is now added to the listing of offenses which result in suspension,” according to the letter to parents, which also was posted on the school’s Facebook page.

While Kaiserslautern took the extra step of specifically mentioning e-cigs, DODEA officials said that the items are already prohibited at all schools under established policies banning students from possessing “drug paraphernalia” and tobacco products.

“We are considering it a tobacco product,” said DODDS-Europe spokesman Bob Purtiman. “The policy we have here is in line with the military services, which also treat e-cigarettes as a tobacco product.”

DODEA disciplinary regulations already prohibit students “from possessing or using tobacco, or any product containing tobacco or nicotine products,” including cigarettes, cigars, miniature cigars, clove, smokeless tobacco, snuff, chew packets and betel nut, according to the regulation. Students can be suspended or expelled if caught with any of those products.

Invented by a Chinese medical researcher as a smoking cessation device, e-cigarettes use a battery to heat liquids that allows users to inhale a vapor, which can include nicotine, flavor additives and other chemicals. The liquids, sold only in certain shops in countries such as Germany, come with names like Snickerdoodle, Banana Milkshake or Super Cool Minty Menthol Madness.

There is no tobacco in the e-cig liquids.

The metal tubes — which can range in cost from $7 for a nonrechargeable version sold at local military shoppettes to about $60 for a rechargeable, refillable device — come in many shapes and can be easily mistaken for ink pens. E-cigs mimic the experience of smoking, but they produce a water vapor, not secondhand smoke like conventional cigarettes.

But because most liquids used in e-cigarettes contain nicotine, some researchers and health advocates are concerned that their use could lead to nicotine addiction or be a gateway to tobacco products. A recent Centers for Disease Control and Prevention report found that, from 2011 to 2012, e-cigarette use among middle and high school students nearly doubled. However, there doesn’t appear to be any evidence or studies to support or dispel the belief that teens are using the e-cigs as a gateway to tobacco products.

There is ample evidence that smoking ordinary cigarettes increases the risk of lung cancer, but the jury is still out on e-cigarettes.

The goal of DODEA’s anti-smoking policy is to help students learn to make healthy choices, said Joyce Lutrey, the Department of Defense Education Activity Pacific’s deputy director of curriculum instruction. “Our real clear message that this (using e-cigarettes) is not a good choice.”

DODDS-Europe has also updated its school athletic manuals to add e-cigarettes to the list of products student athletes are prohibited from using at school-sponsored athletic events, Purtiman said. DODDS-Europe was also recommending a potential revision to DODEA’s administrator’s guide to address e-cigarettes, he said.

Lutrey said that DODEA regards e-cigarettes as “drug paraphernalia” and prohibits students from possessing them.

“Schools are smoke-free environments for adults and students,” she said. “There is zero tolerance in schools for anything that is smoking or improper use of drugs.”

DODEA-Pacific spokesman Charly Hoff said students caught with e-cigarettes would typically be summoned to a meeting to discuss their transgression, but that punishment in severe cases could include suspension or even expulsion.

Purtiman said the consequences for a student caught with an e-cigarette is left up to each school.

The ban extends to non-nicotine electronic cigarettes, he said.

“How do you determine what’s in, what’s not in it? Then it becomes a distraction … if you have it on school grounds,” he said.

In the Pacific, school officials said they also are concerned that some youths have modified electronic cigarettes for use with recreational drugs such as marijuana.

While there are no reports that students are doing this in the Pacific, electronic cigarettes can be used to vaporize liquids containing THC, the chemical compound found in marijuana that provides a “high” to the user. One school district in Long Island, N.Y., for example, recently banned e-cigarettes from school grounds, in part from concern that the devices could be manipulated to mask marijuana use, according to a Newsday report.

Many cities, businesses and restaurants through the U.S. are also trying to figure out how to deal with the rising popularity of the devices. New York City, for example, has banned the use of e-cigarettes indoors.

There is no federal law restricting the use of e-cigarettes in the workplace, but some military services have taken action.

Four years ago, the Air Force banned e-cigarettes from its workplaces, while the Navy only allows e-cigarettes to be used in designated tobacco-smoking areas outside buildings.

In November, Fort Leonard Wood, an Army post in Missouri, issued a policy banning the use of e-cigarettes from any public or government building on the installation.

“Due to the nature, appearance and safety concerns of e-cigarettes, they are considered to be in the same category as tobacco,” according to an Army news release.

Many states have enacted — or are the process of passing — laws that would prohibit the sale of e-cigarettes to minors.

The future of the e-cigs likely depends on the Food and Drug Administration, which is considering restrictions on their sale and marketing.