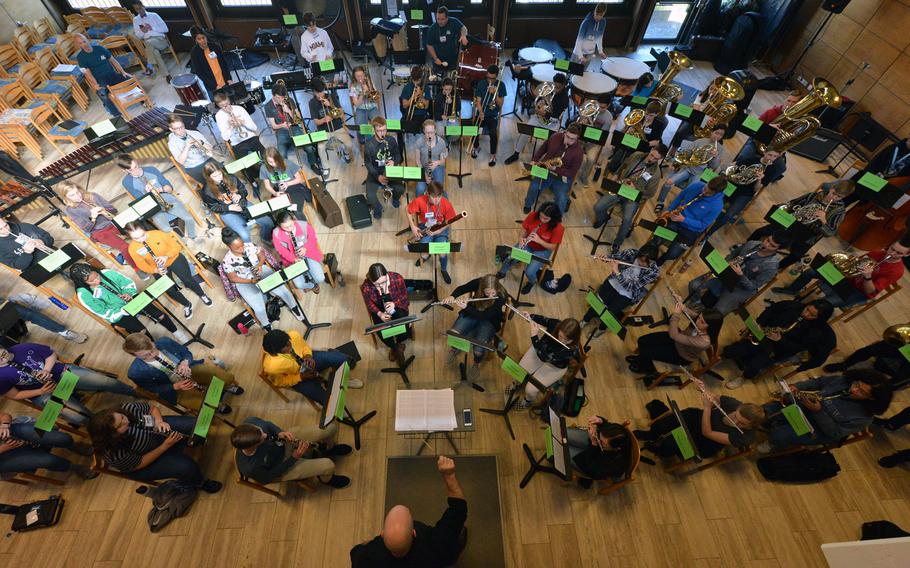 The band under the direction of Tim Robblee rehearse ''Letter from Sado'' at the DODEA-Europe Honors Music Festival. The band featured 62 instrumentalists, while 76 singers made up the choir at this year's event. (MICHAEL ABRAMS/STARS AND STRIPES)

OBERWESEL, Germany — When she moved to Lakenheath, England, halfway through her freshman year, Dresden Goodwin didn’t think she could sing and only took choir because the engineering class she wanted was full.

Goodwin, now a senior, is singing soprano this week at the annual DODEA-Europe Honors Music Festival, her third year participating in the select choral group. The experience, she said, has changed her life.

“I was totally on an engineering track and from being in choir and coming to things like this … I’m now going to study musical theater in London next year,” she said. “This has pushed me towards my new life.”

Goodwin’s passion for music is the norm among the nearly 140 students from 18 Department of Defense Education Activity schools from across Europe partaking in the festival — the military school system’s equivalent of all-state choir and band.

As this year’s festival T-shirt says, it’s “Eat, sleep, music repeat” — and the students said they wouldn’t have it any other way.

“I keep coming back because it’s really, like, the greatest musical experience available for kids overseas,” said senior Donovan Compton, a bassoon player from Vicenza High School in Italy who is participating in his fourth and final festival.

This year, 76 vocalists and 62 band members were chosen from more than 350 blind auditions.

They’re holed up this week at a hostel overlooking the Rhine River rehearsing for a concert they’ll put on Thursday in Bingen.

On Tuesday, the place was jamming.

The band at one point rehearsed “The Jig is Up,” a lively American composition that sounds like a traditional dance tune until it doesn’t, said Tim Robblee, the band’s guest conductor.

“It’s a very predictable jig until it kind of jostles and surprises you,” he said. For the kids, it’s challenging to play because they have to figure “out how it’s changing and make it cohere in their brains.”

“’The Jig is Up’ is just a really fun song to play, in general,” said Ramstein senior Alex Sims, a percussionist who this week is playing the bongos, the maracas, the cabasa, the vibraphone, the bass drum and the timpani.

Meanwhile, there were some clapping and foot-stomping going on in the choral room, while the choir members sang and swayed their hips to “Nda Wana,” an African folk song that is sung in the Bantu dialect.

The song required a similar energy as “Worthy to be Praised,” a gospel tune that earned high praise from the students after a mini-rehearsal with Ramstein Middle School music instructor Giovana Kingsberry.

“I always get excited when we do gospel music,” said Stuttgart senior Tito Mercado, a tenor in the choir who loves the musician Bruno Mars. “I always smile when I’m singing it.”

The festival offers the students a diverse lineup of musical compositions intended to challenge and sharpen their skills while further kindling their love of music, said the guest conductors.

Every year, DODEA brings in two new guest conductors, usually from the states, to lead the band and the chorus with help from DODEA music instructors. Robblee is the director of bands and associate professor of conducting at Shenandoah Conservatory in Winchester, Va.

This year’s guest choir conductor, Justin Lewis, has ties to both Germany and the Air Force. An Air Force officer now posted to the Pentagon, Lewis previously was the associate director of the Air Force band at Ramstein and directed the Rheinland-Pfalz International Choir.

His background in Europe gives him a perspective on the importance of Europe-wide school events.

“As the U.S. military’s footprint in Europe expands and contracts, they (DODEA) need to continue to be flexible to give students the opportunity to learn, especially when they’re geographically separated from a lot of other students their age,” he said.

That’s especially true for students such as Hayden Davis, a trombonist from tiny Alconbury in the U.K.

“My band has, like, seven people,” the senior said. “I always miss the feeling of playing with a super-large band and having that big sound you just can’t get with a few people.”