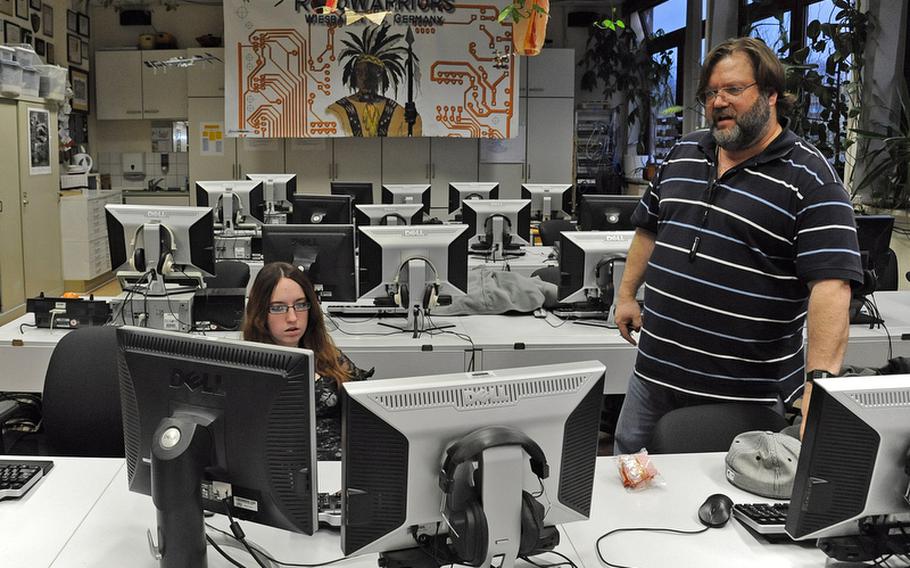 Buy Photo
Frank Pendzich talks to Casey Mann as they look over the design for Wiesbaden High School's robot that was entered in the FIRST Robotics Competition in Las Vegas last school year. DODEA is launching a pilot program this year focusing on the STEM (science, technology, engineering and math) initiative, and robotics engineering is one of the classes being offered at a few DODEA schools. (Michael Abrams/Stars and Stripes)

Buy Photo
Frank Pendzich talks to Casey Mann as they look over the design for Wiesbaden High School's robot that was entered in the FIRST Robotics Competition in Las Vegas last school year. DODEA is launching a pilot program this year focusing on the STEM (science, technology, engineering and math) initiative, and robotics engineering is one of the classes being offered at a few DODEA schools. (Michael Abrams/Stars and Stripes) 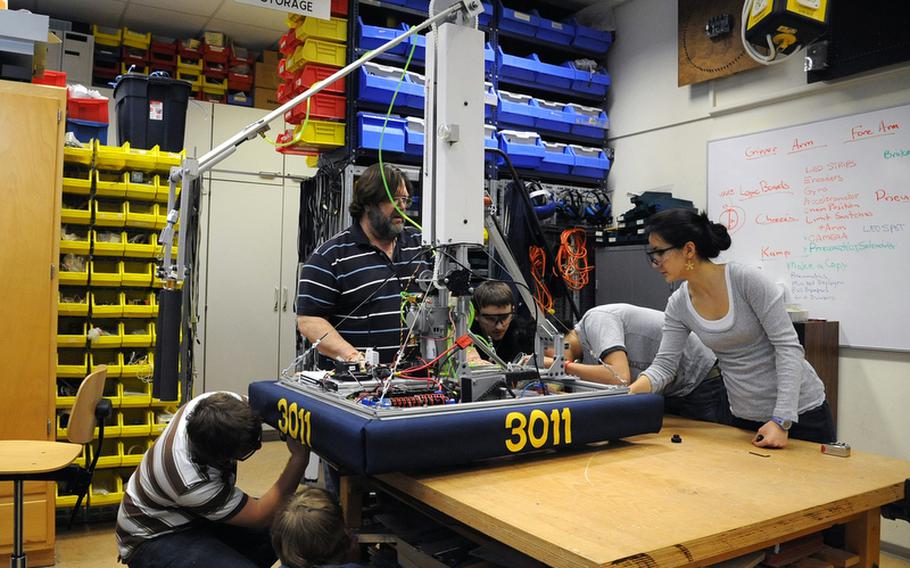 Buy Photo
Last February Wiesbaden robotics club adviser Frank Pendzich, center, watched as Tim Kanser, Riley Pickering, Kenny Philips, Dhillon Tisdale and Shena Cousens, from left, attached skirting to the RoboWarriors' robot as they got it ready to be shipped off to Las Vegas for the FIRST Robotics Competition. DODEA is launching a pilot program at a handful of DODEA schools this year focusing on the STEM (science, technology, engineering and math) initiatives, and robotics engineering is one of the classes. (Michael Abrams/Stars and Stripes) 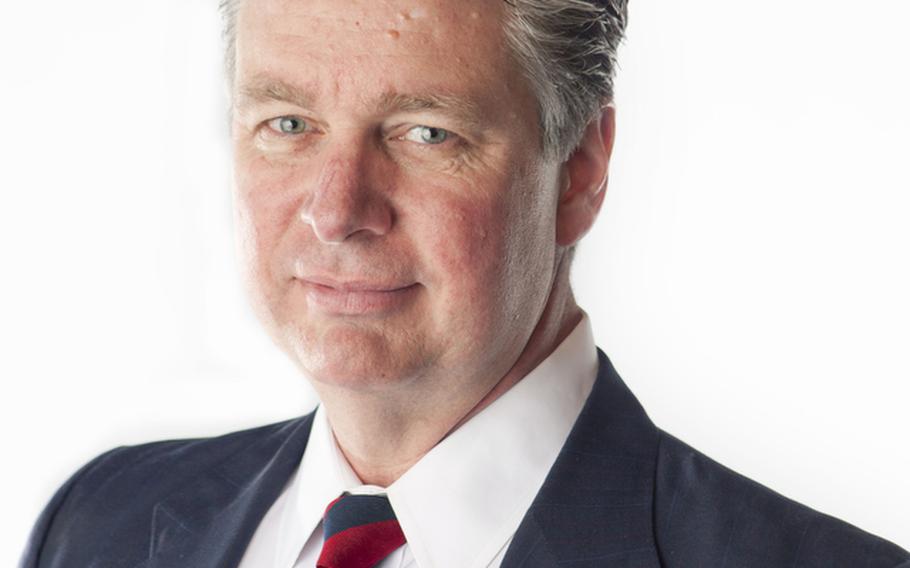 Mark Bignell, chief of the arts, information and careers branch at DODEA, says the school system serving U.S. military dependents in the States and overseas has spent more than $1 million developing four engineering classes as part of a pilot program to get students interested in science, technology, engineering and math. (Photo courtesy of DODEA)

And, a few who attend Department of Defense Education Activity schools this year might be able to make the case that they&rsquo;re doing both &mdash; well, sort of.

DODEA is launching a pilot program as part of a nationwide initiative started by President Barack Obama two years ago to spur students to excel in science, technology, engineering and math. The goal of the STEM program, Obama said, is to reaffirm &ldquo;America&rsquo;s role as the world&rsquo;s engine of scientific discovery and technological innovation.&rdquo;

The school system serving U.S. military dependents in the States and overseas has spent more than $1 million developing the classes over the last few years, according to Mark Bignell, chief of DODEA&rsquo;s arts, information and careers branch. The core curriculum will be consistent, regardless of where each course is taught, DODEA officials said.

If the programs are deemed successful, they&rsquo;ll be expanded to more schools in the next few years. &ldquo;It all depends on the pilots,&rdquo; he said.

Dave Izzo, who will teach gaming technology at Aviano High School, expects students will enjoy the class. But they shouldn&rsquo;t count on a lot of time playing their favorite games.

&ldquo;This is a whole lot different than playing a video game,&rdquo; he said. &ldquo;It&rsquo;s a fairly challenging project to develop, build and operate a functional game.&rdquo;

And not one without its rewards. Video games generate hundreds of millions of dollars in sales each month.

Frank Pendzich, who will teach robotics engineering at Wiesbaden High School in Germany, said all four courses will offer skills to students that they can use after graduating. And students, in turn, could use those skills to help others around them.

&ldquo;This world is facing problems it doesn&rsquo;t know it has yet,&rdquo; he said. &ldquo;And we&rsquo;re going to need engineers to solve them.&rdquo;

Students enrolled in green technology could be working with military experts to tackle issues at their local bases, Bignell said, such as recycling and saving energy.

&ldquo;Our expectation for all of these courses is that there will be community involvement,&rdquo; he said. &ldquo;We hope that students will be able to work with military experts in their respective fields.&rdquo;

Students at Kubasaki High School on Okinawa will see how different forms of energy can be used to power model homes, according to teacher Jon Walden. Those homes will be built by students in an architecture class.

Francis Eberle, executive director of the National Science Teachers Association, said that such crossover projects make sense. And, he said, STEM students shouldn&rsquo;t focus on math and science at the expense of liberal arts.

&ldquo;It doesn&rsquo;t mean we want everyone to be scientists or engineers,&rdquo; he said, adding that DODEA&rsquo;s plan to implement the program was &ldquo;good news. This country needs to be focusing more on technical areas.&rdquo;

Students taking STEM courses need not only be well-rounded in other subjects, but they need to become familiar with engineering concepts as early as possible, Eberle said.

DODEA says it will be doing that. Russ Claus, education chief for DODDS-Europe, said STEM-type curriculum has been added to elementary and middle school classrooms, though there won&rsquo;t be separate classes focusing just on those subjects.

&ldquo;Our students need to have 21st century skills related to science, technology and math,&rdquo; he said. &ldquo;We need to embrace these ideas, and frankly, we&rsquo;re very passionate about them here.&rdquo;

Faye Batey, career and technical education coordinator for DODDS-Europe, said, if the pilot programs are successful, DODEA will certainly look to add other courses.

She said she used to be concerned about the time her son spent playing video games. But he now uses many of those skills in his job as a commercial pilot.

Pendzich has been teaching a different kind of robotics class for years and has to turn away interested students every year because the class can only hold so many. He said students&rsquo; interest in math, science and engineering can be stimulated if they&rsquo;re shown how they can use those skills in fields that interest them.

If DODEA offered an engineering class, &ldquo;no one would take it,&rdquo; he said. &ldquo;America&rsquo;s in desperate need of engineers, because (students) don&rsquo;t know what engineering is. These classes are all about engineering, in the form of subjects we know they&rsquo;re interested in.&rdquo;