Micaela Young, left, and Elena Fritz reassemble a disk brake during auto tech class in January at Ramstein High School, Germany. Elena said she jumped at the opportunity to take the class because she&#39;d heard it will be discontinued next year. (Ben Bloker/S&S)

Micaela Young, left, and Elena Fritz reassemble a disk brake during auto tech class in January at Ramstein High School, Germany. Elena said she jumped at the opportunity to take the class because she&#39;d heard it will be discontinued next year. (Ben Bloker/S&S) 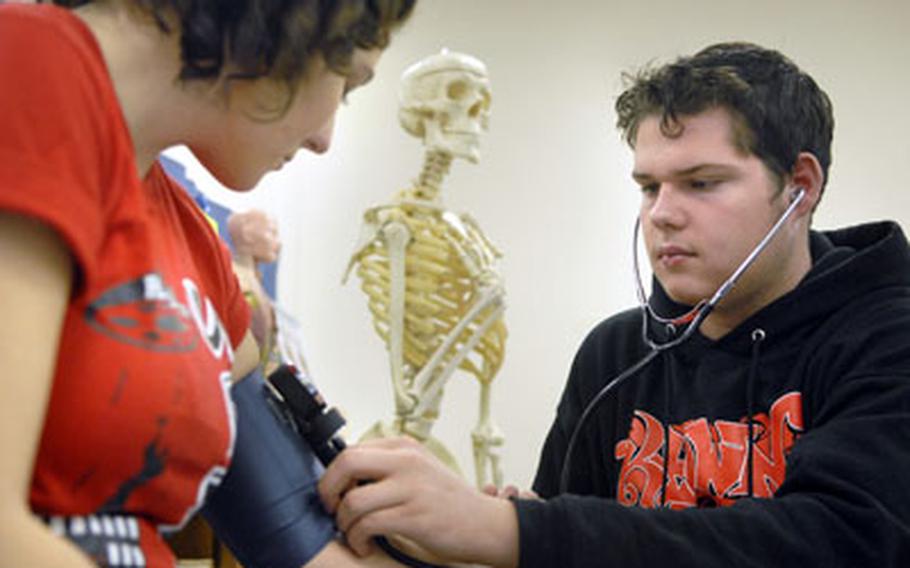 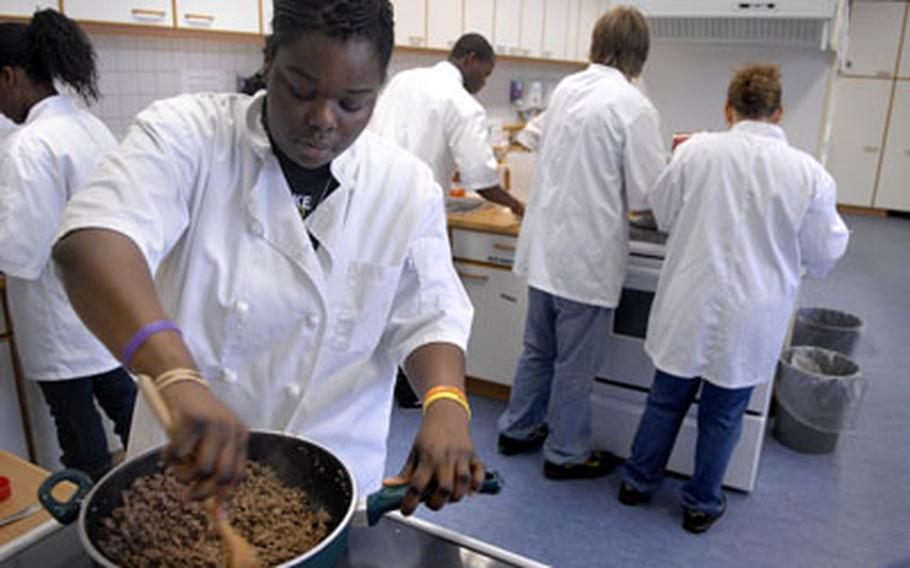 Amanda Flanagan, a junior at Baumholder High School, stirs up the sauce for a lasagna in January in culinary arts class. Amanda is a second-year culinary arts student. (Ben Bloker/S&S) 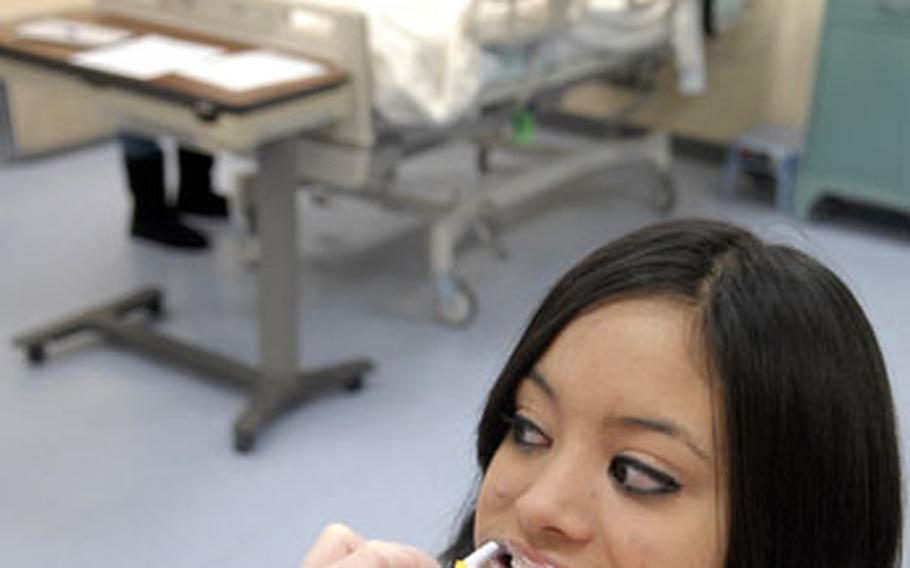 Rachele Hernandez gets her teeth brushed by Samantha Brown as part of health science class in January at Ramstein High School. Students experience a wide range of nursing skills such as changing sheets with a patient still in the bed, seen in the background, during the course with an opportunity to become certified as a nursing aidd after working at Landstuhl Regional Medical Center. (Ben Bloker/S&S)

No longer will students get greasy fingers tinkering under a car hood or send sparks flying from a welder&#8217;s tool.

Instead, students may soon be building robots, designing video games or creating solar panels in a revamped curriculum meant to tailor for the 21st century job market a program once called vocational education.

Department of Defense Education Activity schools will begin rolling out new engineering courses in robotics, biotechnology, green technologies and gaming design in the 2011-12 school year as part of a major overhaul to their professional and technical studies program &#8212; now called "career and technical education."

The redesign also calls for the elimination in five years of three programs: auto technology, welding and lodging management.

Culinary arts and Cisco networking will see some modifications.

DODEA officials announced the changes late last month. They&#8217;re based on recommendations from a task force that began meeting more than a year ago to evaluate the schools&#8217; array of about 60 career and technical offerings.

Most of the courses are open to students in grades 9 to 12, with two credit hours required for graduation. Unlike vocational education of the past, which typically was meant for students not going to college, DODEA&#8217;s current program exposes students to multiple career choices and helps prepare them for future jobs, the military or college, officials said.

With DODEA spending more than a million dollars of its $1.9 billion budget on the program, the task force &#8722; a mix of teachers, administrators and school counselors &#8212; looked at equipment and other costs in its review, officials said. Overall spending was redirected &#8212; but not reduced &#8212; to ensure "we&#8217;re using the resources the best way that we can," said Marc Mossburg, DODEA curriculum chief.

"We want to try and &#8230; give students an opportunity to excel in the future work force rather than get into a niche that isn&#8217;t going to have the best opportunities for them," said Mark Bignell, DODEA chief of the arts, information and careers branch.

But auto technology instructor Jim Battista thinks the group has fallen short of that goal.

By eliminating auto technology, welding and, prior to this year, cosmetology, Battista thinks DODEA is veering away from the kind of hands-on learning that appeals to students who don&#8217;t succeed in the traditional classroom.

"There&#8217;s a group of kids that need a reason to come to school," he said. "Auto technology provides kids who learn best by working with their hands" an outlet for success. "For a lot of these kids, a car is magical. It&#8217;s going to get them away from the house. It&#8217;s a tremendous motivator."

Of the three career and technical programs earmarked for elimination, auto technology is the most popular, with just over 400 students enrolled this school year in Auto Technology I and II in eight high schools, according to DODEA figures.

At Ramstein High School in Germany, Battista&#8217;s five auto technology classes are each filled to the maximum 16 students.

The class works on used cars donated by local residents. Some students take the class to become savvier about cars. Others, like senior Michael Kopp, are interested in pursuing a career in the field. Kopp plans to attend college and get an engineering degree, and then work in a race car or hot rod shop.

Bignell said one reason the task force decided to discontinue the program was because of its high cost compared to low student numbers.

"It&#8217;s so incredibly difficult to maintain," he said. "The auto industry is rapidly computerizing. In order for us to outfit those courses, it&#8217;s in the hundreds of thousands of dollars. It&#8217;s just not sustainable with the number of students. &#8230; It never really took off as a popular program."

DODEA officials point out that students still interested in attaining automotive skills may enroll in a career practicum and perhaps get on-the-job training in a base auto hobby shop, for example.

This is a relevant time to be asking: "How can we increase our offerings for something that might have broad implications for the future?" Bignell added.

DODEA officials think they&#8217;ve found an answer in the proposed new courses. In green technology engineering, for example, students might study solar heating. In robotics engineering, they may learn how to build a robot.

The curriculum for those courses, as well as biotechnical engineering and gaming technology, is still taking shape, with a DODEA technical evaluation board to begin reviewing each this summer, Bignell said.

DODEA expects that the gaming design program will be especially popular, if stateside trends are any indication.

At George Mason University in Arlington, Va., for example, anticipated fall enrollment in the college&#8217;s new bachelor&#8217;s degree program in video game design is about 500 percent higher than expected, according to a recent Washington Post story.

Current enrollment in the program is already at about 200.

One of DODEA&#8217;s more popular career and technical programs &#8212; culinary arts &#8212; will see changes this fall. Culinary Arts III will disappear, Bignell said, and third-year culinary arts students who would otherwise enroll in the course may take a career practicum, through which they can acquire job experience in the restaurant industry.

Also, DODEA will raise the bar for incoming culinary arts teachers. New hires will need a culinary arts degree from an accredited culinary arts school, such as the Culinary Institute of America or Johnson and Wales, which should include a 600-hour internship program, Bignell said. Similar experience is required of culinary arts educators in public schools in Chicago and Fairfax County, Va., Bignell said.

Currently, more than a thousand students are enrolled in culinary arts in DODEA, and Bignell continues to field requests from school principals for new programs, he said.

DODEA course changesChanges to the Professional and Technical Studies program at Department of Defense Education Activity schools include:

Cisco networking: Starting in 2011-12, Cisco II will be eliminated and Cisco I will be taught over two years, with the first year covering home networking, and the second year, business networking. The goal is to improve the current 2-percent pass rate for the Cisco Certified Network Associate exam.

Competencies: DODEA will begin developing a list of skills students must acquire in each course.