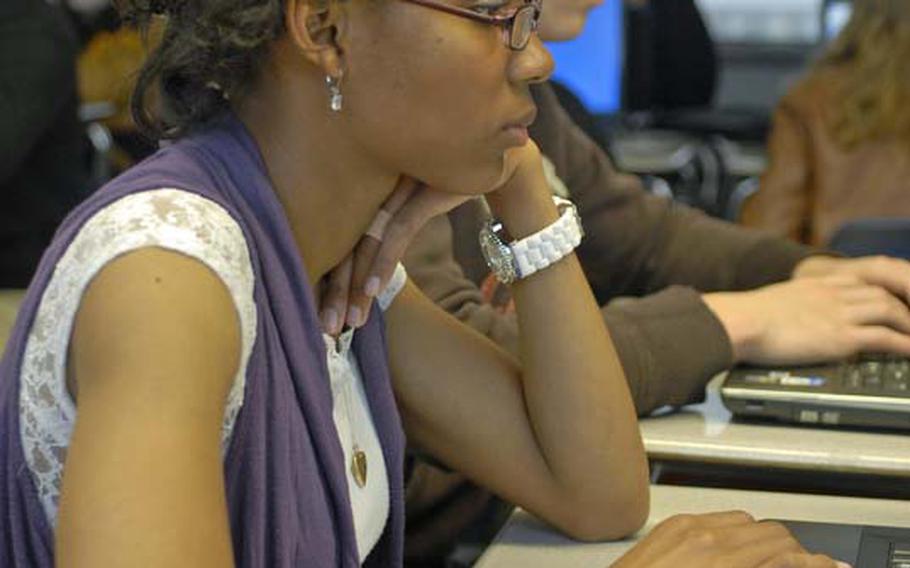 Buy Photo
Wiesbaden High School seniors Alexandria Beverly, 18, and Joseph Griffith, 18, use laptops during a sociology class. The computers were issued to them as part of a DODDS pilot program. (Mark Patton/Stars and Stripes)

Buy Photo
Wiesbaden High School seniors Alexandria Beverly, 18, and Joseph Griffith, 18, use laptops during a sociology class. The computers were issued to them as part of a DODDS pilot program. (Mark Patton/Stars and Stripes) 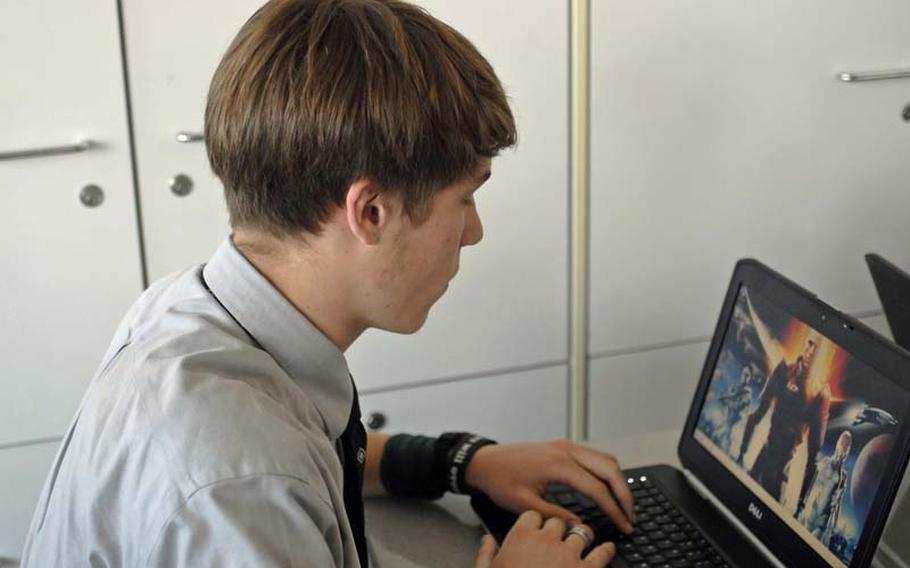 Buy Photo
Wiesbaden High School senior Andrew Hemphill, 17, gets his laptop booted up before a class at the school. Wiesbaden is one of 10 DODDS schools where students and teachers are being issued laptops they use during the school year as part of a pilot program. (Mark Patton/Stars and Stripes) 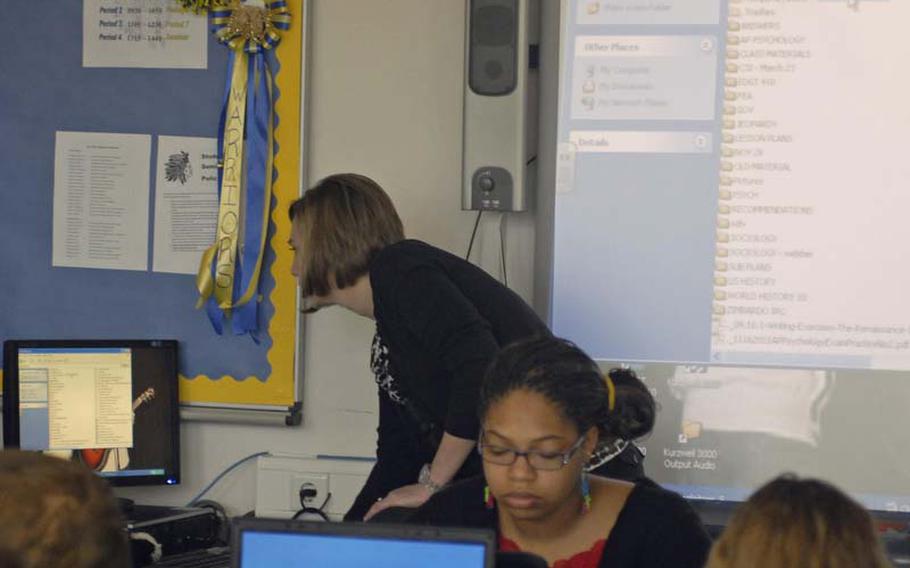 Buy Photo
Wiesbaden High School teacher Tracy Wegleitner went paperless in her classrooms after laptops were recently issued to students and teachers at the school as part of a pilot program. (Mark Patton/Stars and Stripes) 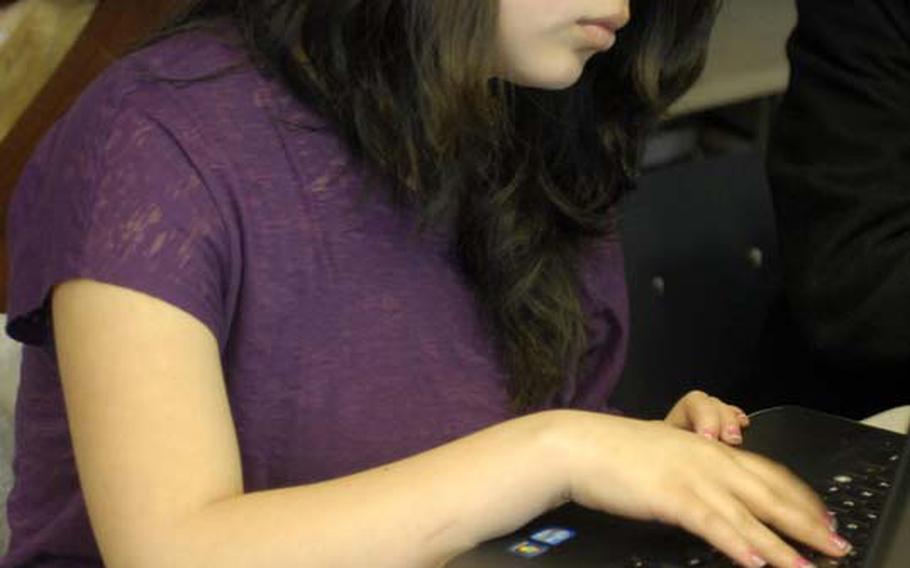 Buy Photo
Wiesbaden High School junior Nicole Butron, 17, takes notes with her laptop during a recent class at the school. Wiesbaden students and teachers were recently issued laptops as part of a pilot program. (Mark Patton/Stars and Stripes) 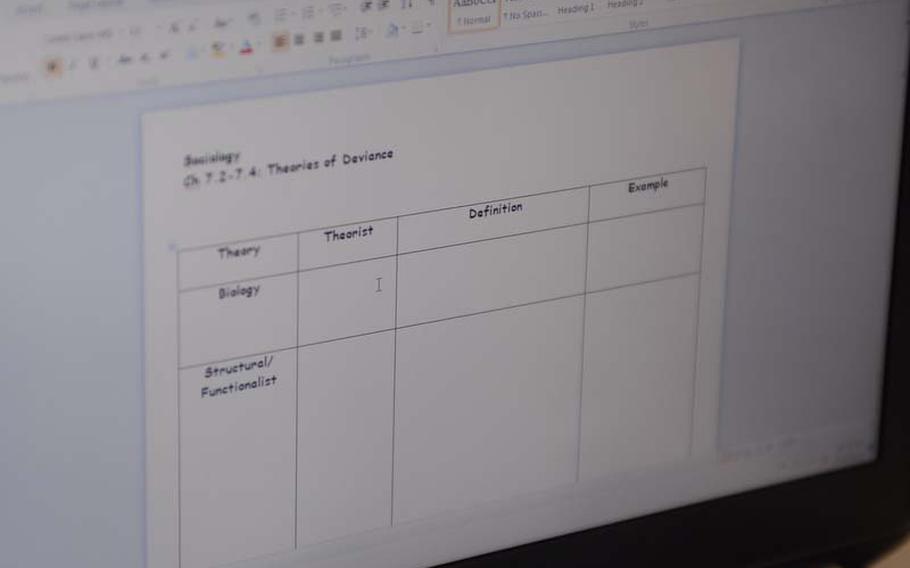 Buy Photo
A sociology chapter plan on a student's laptop is on display during a recent class at Wiesbaden High School. Wiesbaden students and teachers were recently issued laptops as part of a pilot program. (Mark Patton/Stars and Stripes)

KAISERSLAUTERN, Germany &mdash; The Defense Department school system is issuing laptops to students in select schools, hoping the pilot program will match the success of similar programs in state schools that have made steady gains in student achievement.

Department of Defense Education Activity began issuing laptops to every student and teacher in 10 of its military schools this spring with the intent of expanding the program to all DODEA high schools and middle schools.

Eight of the 10 schools in the initial phase are in Europe, and the two others are stateside, at locations with at least 50 percent wireless capability, DODEA officials said. A limited expansion is planned next school year in the Pacific, where broadband and wireless capabilities are catching up to that of Europe&rsquo;s schools.

&ldquo;Specific sites have yet to be determined,&rdquo; DODEA spokeswoman Elaine Kanellis said in an email.

Students can take notes on their laptops in class, access online research and digital textbooks for school projects, participate in distance learning courses, and download teacher-recorded audio and video lessons, among other uses, Fitzgerald said.

&ldquo;This is a way we can level the playing field for our children,&rdquo; she said, bridging the digital divide between students who have computers at home and those who do not. Students sign out the laptops for the school year and can take them home.

Fitzgerald doesn&rsquo;t like to call the &ldquo;one-to-one laptops&rdquo; a technology initiative. &ldquo;This is about curriculum instruction and maximizing what we can do for the benefit of the kids,&rdquo; she said, with the goal being gains in student achievement.

Though new for DODEA, one-to-one computing programs have been adopted by numerous school districts across the United States with varying degrees of success. DODEA officials said one-to-one programs have existed for 22 years, and six states have state-wide programs.

Mooresville, N.C., boasts one of the most successful laptop programs in the nation, DODEA officials said. The agency&rsquo;s director joined the long list of educators who have visited the district to observe the program, which, according to a February story in The New York Times, has quietly emerged as a national model of the digital school.

In Mooresville, 88 percent of students across grades and subjects met proficiency standards in 2011, compared with 73 percent three years earlier, according to The Times.

A study published last year of the program in Maine, which distributed laptops to all middle school students beginning in the 2002-03 school year, attributed improved writing performance on standardized tests.

Teachers also reported substantial benefits from the program, indicating the laptops have helped them teach more in less time and with greater depth, and allowed them to individualize their curriculum and instruction more, according to the study.

&ldquo;The use of the device needs to match curriculum and learning needs,&rdquo; said David Silvernail, one of the authors of the study. &ldquo;The device must be a better way to teach and learn specific content or skills and the assessment must match what is learned and how.&rdquo;

At Wiesbaden, where juniors and seniors got laptops in March, and freshmen and sophomores received theirs in April, response from teachers and students was mixed. &ldquo;I like having everything compacted into just a laptop instead of papers, binders and stuff,&rdquo; said senior Andrew Hemphill, 17.

He acknowledged being nervous when one of his teachers, Tracy Wegleitner, in her first year teaching Advanced Placement psychology, sociology and world history, made her classroom paperless.

But, Andrew said, &ldquo;it&rsquo;s worked out pretty well so far.&rdquo;

Of her decision to phase out paper note-taking in class, Wegleitner said, &ldquo;If you&rsquo;ve got a tool that&rsquo;s going to allow you to do everything and take notes and keep notes, why don&rsquo;t we go ahead and do it?&rdquo;

The approximate $651 cost per student includes the laptop, batteries and charging station. DODEA is spending about $2.8 million for 4,600 computers in 10 schools.