Members of the Wiesbaden High School football team participate in a preseason practice, Thursday, Aug. 27, 2015. Cranes in the distance are at work on the new high school, scheduled to be completed before the 2017-18 school year. The majority of classes are currently held in temporary buildings. (Dan Stoutamire/Stars and Stripes)

Members of the Wiesbaden High School football team participate in a preseason practice, Thursday, Aug. 27, 2015. Cranes in the distance are at work on the new high school, scheduled to be completed before the 2017-18 school year. The majority of classes are currently held in temporary buildings. (Dan Stoutamire/Stars and Stripes) 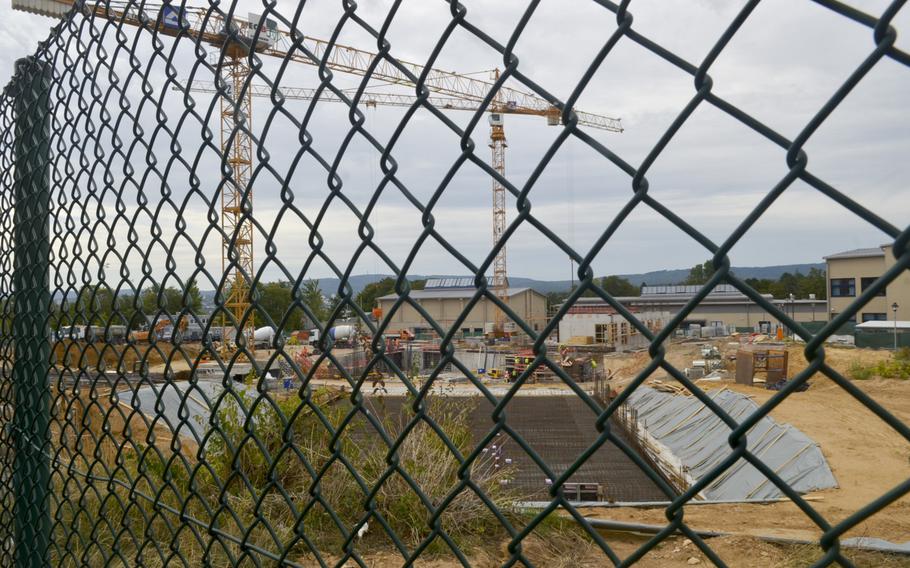 Construction crews work on the new Wiesbaden High School building, Thursday, Aug. 27, 2015. The facility, scheduled to be completed before the start of the 2017-18 school year, is designed to comply with the Department of Defense Education Activity's 21st-century education facilities specifications. (Dan Stoutamire/Stars and Stripes) 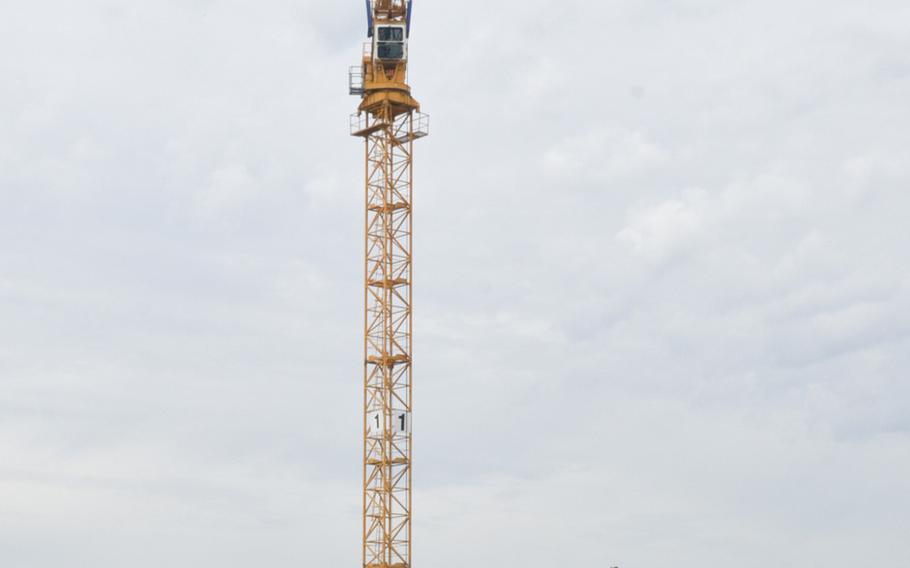 Construction crews work on the new Wiesbaden High School building, Aug. 27, 2015. The facility, scheduled to be completed before the beginning of the 2017-18 school year, is designed to comply with the Department of Defense Education Activity's 21st-century education facilities specifications. (Dan Stoutamire/Stars and Stripes) Lexie Orr, an eighth-grader at the Bahrain School, listens to her teacher, Tim Falls, as he gives directions for the next activit, Thursday, Aug. 27, 2015. Classes began earlier this week for the Bahrain School. (Chris Church/Stars and Stripes) 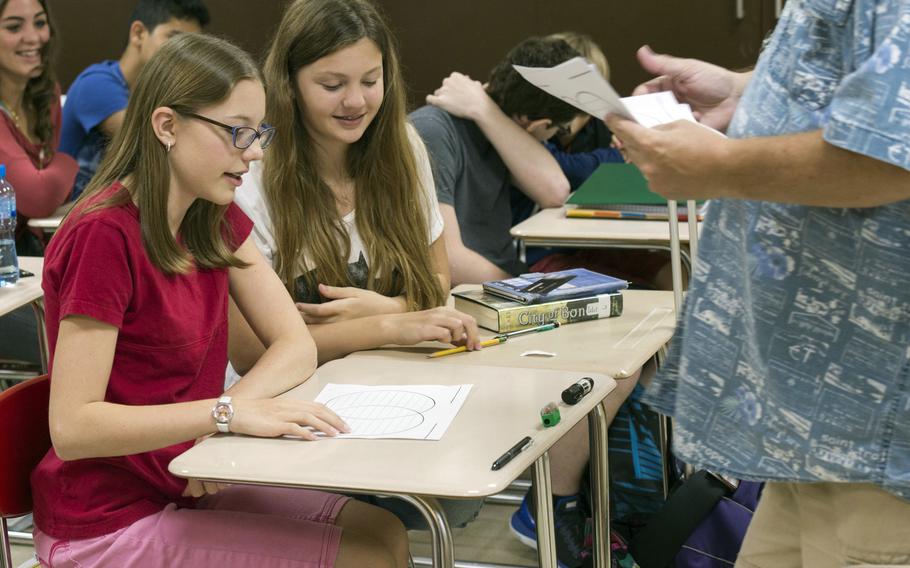 Haley Rowe, left, an eighth-grade student at the Bahrain school, and classmates begin work on an assignment handed out by their teacher, Tim Falls, Thursday, Aug. 27, 2015. Classes started earlier this week at the Bahrain School. (Chris Church/Stars and Stripes)

The youngest students in Department of Defense-run schools worldwide will be the first introduced to new math standards, part of a wider rollout of a new curriculum designed to conform to national education standards.

Other changes are on the horizon at several schools operated by the Department of Defense Education Activity, including consolidation and new facilities. But the new math curriculum will be the biggest change worldwide this school year.

DODEA is introducing “College and Career Ready” standards — the agency’s name for what’s known stateside as the Common Core.

It specifies what students should know at the end of each grade level in mathematics, English and other main subjects. The standards have been adopted by 43 states and the District of Columbia.

All DODEA schools will begin using the new mathematics standards for pre-kindergarten to fifth grade starting with the first day of school.

That day, for most DODEA students overseas, is Monday.

Elementary school teachers returned to the classroom early this year for mandatory training in the new math standards, whose introduction in U.S. schools has been sometimes controversial.

“It’s a brand-new curriculum, it’s a different scope and sequence, but it’s not like we didn’t have standards before,” DODEA Director Thomas Brady said in a telephone interview.

The new program has been “very well accepted,” though with a mix of enthusiasm and nervousness, he said. “It’s quite a change for our teacher workforce.”

DODEA announced adoption of Common Core standards three years ago, but a concerted effort to implement the program began last October, about seven months after Brady took over as DODEA’s director.

“It’s important to me because it’s important to the kids,” he said, especially because DODEA students move all over the world every three to four years. “I think it’s very, very critical that they’re on the same national standards that the other school districts are.”

Critics of the program say it robs states of local control and flexibility in what’s being taught in schools and will lead to more timely and costly assessments.

“Any time you have a change, some people are reluctant,” acting DODEA Pacific Director Gael Coyle said. She noted that the standards were developed by educators.

“It doesn’t matter if you go to school in Germany or back in the States, you will be working on the same learning standards,” Coyle said.

Under the new standards, teachers will cover less material but with the aim of developing a deeper understanding of key topics, she said. The emphasis will be on real-life applications.

“You will see more students working together in groups, solving problems and connecting their learning with real-life events and problems,” she said in an interview.

Parents will be invited to attend meetings over the next month to familiarize themselves with the new standards.

Next school year, new math and literacy standards for English, science, and history for grades 6 to 12 will be introduced.

Student assessments will also change, but that aspect is still being worked on, Brady said. To promote the new type of learning, DODEA has budgeted about $4.1 billion over the next five years for school construction and renovation. Currently, 25 schools are under construction and 31 are in the design phase, Brady said.

Overall, the number of DODEA schools is decreasing, largely because of the military’s transformation. This year, the agency says, it will operate 172 schools worldwide — 111 overseas — down from last year’s 179. Student enrollment this year is also expected to be smaller, a projected 74,440, down from peak enrollment last year of 78,000.

Several new schools open this fall, among them the $100 million Stuttgart High School and Elementary School in Boeblingen near the Army’s Panzer Kaserne.

The campus features new sports fields, a playground and state-of-the-art computers. Meanwhile, the old Patch High School will be the new home of Patch Middle School, which is absorbing students from Robinson Barracks, which will serve only elementary students. Patch Elementary will be operating out of the old Boeblingen Elementary school while a new school is constructed.

Because of all the changes, school bells won’t ring in Stuttgart until Wednesday.

In Wiesbaden, students will be housed in temporary classrooms again this year while a new high school is readied for opening in 2017. Elsewhere in Germany, elementary students at Spangdahlem will attend school at Bitburg, while their school undergoes construction and renovation. An addition to Netzaberg Middle School is expected to be finished later this fall, as is expansion of the middle and high schools in Ansbach. Ansbach Elementary School is absorbing students from Illeshiem and Rainbow elementary schools, both of which closed last year. Also closed are schools on Lajes Field in the Azores and at Menwith Hill in the United Kingdom.

In the Pacific, much of new construction is dictated by military transformation. At Camp Casey, South Korea, for example, a school will close at the end of this school year as forces move south to Camp Humphreys, where new schools are opening, said DODEA Pacific spokesman Charles Hoff.

Other new schools are being built at Taegu, South Korea, and Iwakuni, Japan, while an elementary school has closed this year at Misawa, Japan, and two elementary schools will be consolidated into one facility on Kadena Air Base in Okinawa, Hoff said.

In Bahrain, a wing at the middle/high school is designated for elementary school students. Classes there, where the school week runs Sunday through Thursday, began Aug. 23.

“I’m excited to be back,” sophomore Noah Henderson said Thursday. “School, it gives you something to do every day, so I’m not bored.”