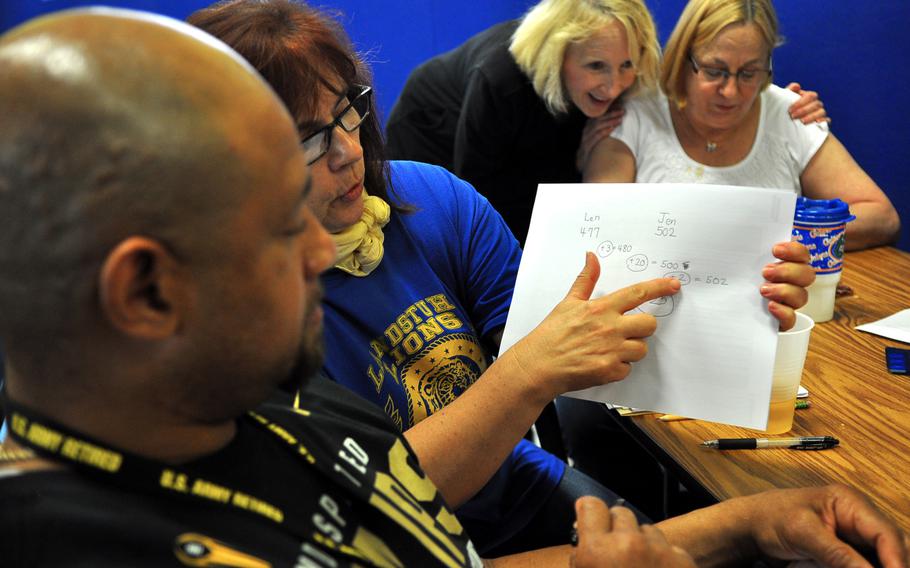 Buy Photo
Gabriele Arseneault, center, a German immersion teacher at Landstuhl Elementary Middle School, Germany, reviews a math problem with fellow educators on May 15, 2015, during a training session at the school focused on the new pre-K to 5 math college and career-ready math standards. DODEA schools will implement those standards in classrooms at the start of the upcoming school year. (Jennifer H. Svan/Stars and Stripes)

Buy Photo
Gabriele Arseneault, center, a German immersion teacher at Landstuhl Elementary Middle School, Germany, reviews a math problem with fellow educators on May 15, 2015, during a training session at the school focused on the new pre-K to 5 math college and career-ready math standards. DODEA schools will implement those standards in classrooms at the start of the upcoming school year. (Jennifer H. Svan/Stars and Stripes) 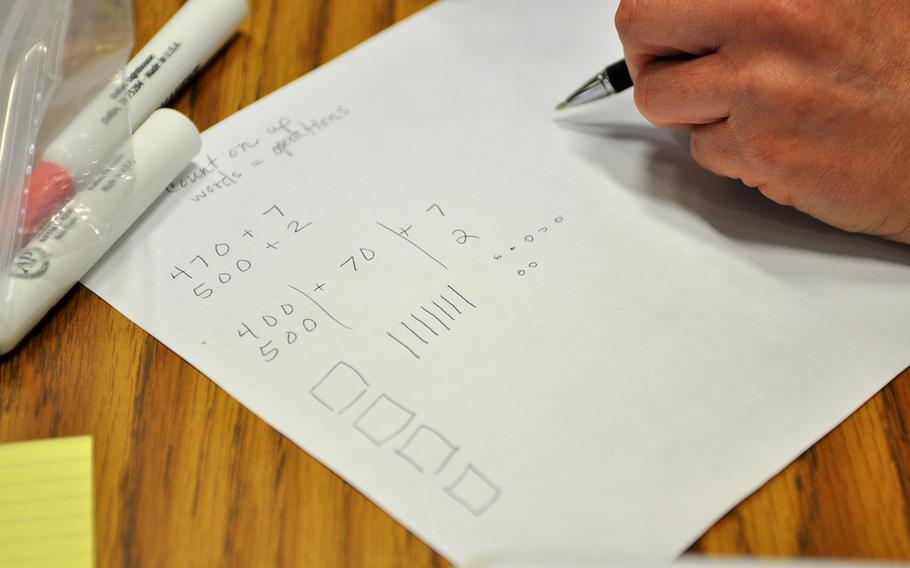 Buy Photo
A teacher shows the different ways an addition problem can be solved during an educator training day on May 15, 2015, at Landstuhl Elementary Middle School, Landstuhl, Germany. The training was focused on the new pre-K to 5 college and career-ready math standards that will be implemented at all DODEA schools at the start of the upcoming school year. (Jennifer H. Svan/Stars and Stripes)

KAISERSLAUTERN, Germany — The Department of Defense Education Activity is investing millions of dollars to ensure its educators understand and are prepared this fall to teach new math standards to its youngest students.

Pre-kindergarten through grade 5 math teachers at all schools will return to their classrooms early this summer to receive two days of on-site training from staff and facilitators from the Charles A. Dana Center at the University of Texas at Austin as part of a $12.7 million contract.

“It’s all connected to supporting the units of instruction that they’ll be teaching in the classroom,” said Carolyn Landel, the center’s managing director. “Now that I understand the math, how do I engage my kids in that math? How will I look at the work that those kids produce?”

Teachers should have a sense of whether their students are developing the math skills they need and, if not, how to adjust instruction “to give them the opportunities” to learn, Landel said.

The project is phase one of DODEA’s new college and career-ready standards, which are based in large part on the Common Core state standards, a set of guidelines for what the nation’s pre-kindergarten-through-12th-grade students should learn.

In addition to DODEA, 43 states, the District of Columbia, and four U.S. territories have adopted the standards, according to the Common Core State Standards Initiative website, although some — citing federal overreach — have dropped or are considering dropping the program.

The Defense Department schools’ transient population — many of its students are members of military families that move every few years — is one reason the school system is adopting the new standards, said Thomas Brady, DODEA’s director.

“We have an obligation to our students,” he said. “Our students are with us for a number of years and then they’re not with us. They go back to local districts that have been implementing these national standards for five, six years.”

Brady said DODEA wants it students to succeed wherever “they happen to be.”

DODEA’s college and career-ready standards eventually will be implemented in all core academic areas, Brady said, with the new math standards being introduced to the secondary grades next year.

“We say five, because we’ve budgeted for five. In reality, (it’s a) five-to-seven- or eight-year program from start to finish.”

Some of those costs are for teacher training, such as that being led by the Dana Center.

The scope of the contract awarded to the Dana Center is a four-year window, Landel said. The first year will focus on pre-K through grade five math teachers. Secondary school math teachers – grades six through 12 – begin receiving training during the second year of the contract, she said, with both groups receiving a total of three years of training.

“We are sending out trainers who will go to all of the DODEA sites worldwide,” Landel said, adding that the center will conduct 150 sessions this summer.

Teachers will receive face-to-face training every summer, and center-trained DODEA math coaches will conduct further training throughout the school year, Landel said. The center will also provide ongoing virtual support to all teachers, as needed, that will include online resources and an email and hotline number teachers can use to get questions answered “in real time,” she said.

For teachers, adopting new standards means there are often changes to the content they are responsible for at their grade level, and there will be topics they may no longer need to teach, and topics that they need to engage students in with greater depth and rigor, Landel said.

Some of the challenges this presents is “understanding those changes, being willing to let go of former ‘favorite’ topics, trusting those topics are being tended to by their colleagues, and mastering select content to ensure the depth and rigor is there,” Landel said.

The training will allow those teachers to “really think about what do the standards in mathematics mean in their content area,” she said. “What are the opportunities in their subject area for kids to practice and apply mathematical thinking?”

The training is necessary, Brady said.

“From my perspective, you can have a great curriculum … but if you don’t have teachers prepared properly through professional development and administrators, then you’re destined to failure.”