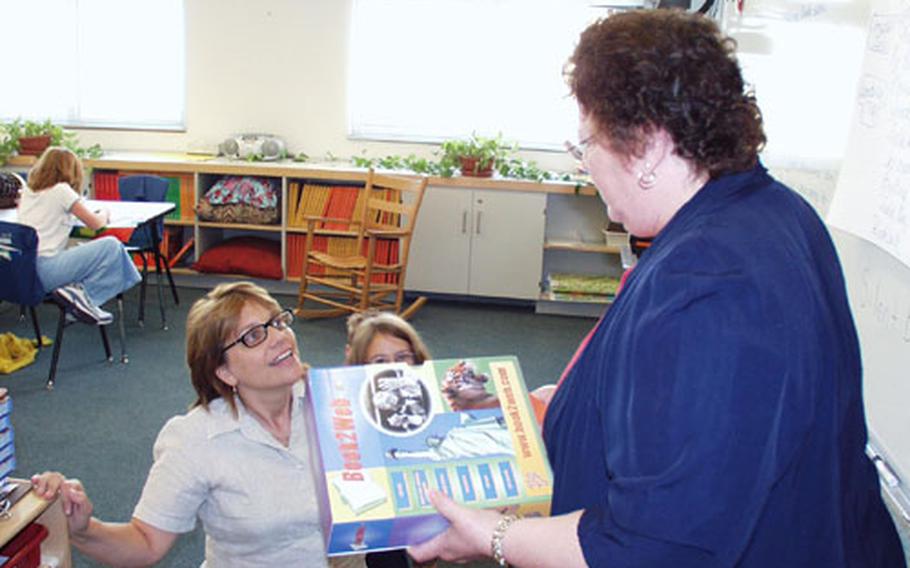 Myrna Moore, a gifted-program instructor at Aviano Elementary School in Italy, delivers school supplies to Susan Sajo, who is on her knees playing with the children. Sajo teaches a combination class of third-, fourth- and fifth-graders. (Kent Harris / S&S)

Now that American students are back at school across Europe, they can expect to receive regular evaluations of their assignments.

But the teachers giving those grades are also being evaluated. The Department of Defense Dependents Schools-Europe has entered the third year of an evaluation system that resembles &#8212; at least on the outside &#8212; what one might expect as an upper-level college student.

New teachers to DODDS are essentially operating under a pass-or-fail system. Established teachers, similar in some ways to those pursuing advanced academic degrees, write their own objectives and then go about pursuing them.

Regardless of the comparisons, though, just about everyone involved &#8212; teachers, union leaders, principals and superintendents &#8212; seems to have positive things to say about the Educator Performance Appraisal System.

&#8220;I haven&#8217;t heard any big complaints about it,&#8221; said Myrna Moore, a gifted-education specialist at Aviano Elementary School in Italy.

That answer often involves research or taking classes. Moore, who hopes to become an administrator, took classes in the States this summer and will do so again next summer.

But stateside study isn&#8217;t always the answer. Linda Curtis, the superintendent for the Isles District, said she has seen several growth plans that involve teachers at the same school working together on projects or studying in groups. Such groups allow teachers to help each other to shore up weak points.

But Curtis and others said the evaluation system also frees up some time for principals to do the same thing. Instead of trying to evaluate whether the teacher is &#8220;excellent&#8221; or &#8220;commendable&#8221; under the five-category forms used to judge many federal employees, principals can simply determine if teachers are doing the job.

Marie Sainz-Funaro, president of the Overseas Federation of Teachers, the union for many DODDS instructors in the Mediterranean area, said that the former evaluation system was seen as arbitrary and confusing.

Most teachers received evaluations in the top two evaluation levels, but &#8220;how they were defined was never really clear.&#8221; Getting one or the other didn&#8217;t affect pay and often created rancor for those who didn&#8217;t understand why they didn&#8217;t get a higher rating, she said.

Now, she said, veteran teachers can &#8220;focus on where you are and where you want to be. I think the new system definitely is better.&#8221;

Michael Priser, the European director of the Federal Education Association &#8212; the union for most teachers in Germany and the United Kingdom &#8212; said the system is also fair to new teachers.

Those teachers must simply receive satisfactory marks in each of five elements:

Priser said teachers must be effective to get passing marks in all the categories.

Russ Claus, principal at Darmstadt Elementary School in Germany, agrees. While asking for a pass-fail grade in college might mean that the student is taking the easy way out, that&#8217;s not the case here, he said.

He also said that the professional growth plans challenge the veteran teachers to improve, instead of just continuing do to the same thing every year.