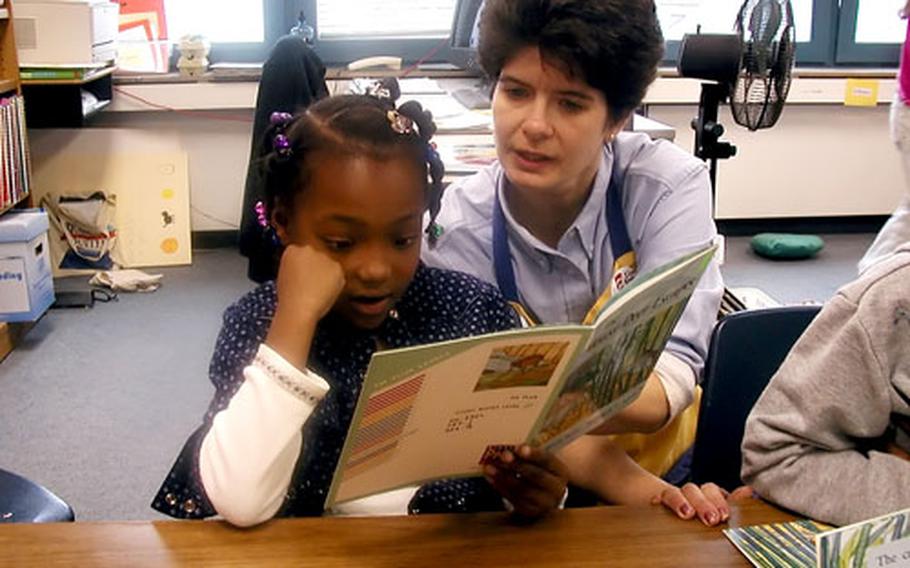 Lisa Heinzmann, a teacher at Kitzingen Elementary School, helps a student sharpen her reading skills in this 2002 photo. The school is one of three in the Würzburg-Kitzingen community that will be closing at the end of the current school year as part of the move of 1st Infantry Division troops to the States. (Steve Liewer / S&S)

The ripple effect of the 1st Infantry Division&#8217;s withdrawal from Germany has been upgraded to an all-out wave in the halls of Department of Defense Dependents Schools in the W&#252;rzburg and Kitzingen communities.

The Bavaria District Superintendent&#8217;s Office is in talks with the Federal Education Association to determine how to handle approximately 100 excess teachers when three schools close after the current school year, according to Ed Atterberry, the district spokesman. The association represents the affected teachers.

With the 1st ID slated to leave Germany for good next summer, school enrollment in those communities is expected to drop from about 2,100 to 700 for the next school year, Atterberry said.

Meetings between the superintendent&#8217;s office and the union are under way to pin down details on how the teachers will be placed in new jobs.

In the past, teachers declared excess because of school closures have been offered positions within the district or, if they chose to leave the district, placed in the teacher transfer program that could send them to any DODDS school around the globe, Atterberry said.

He added that some of those teachers will retire and others &#8212; military family members &#8212; will be moving to the States with their sponsors anyway.

If all of the teachers can&#8217;t be placed, then DODDS could possibly have to implement a reduction in force, Atterberry said, adding that there has not been a RIF in the 33 years he has worked for DODDS.

A letter was sent Tuesday to W&#252;rzburg-area teachers to notify them of the expected enrollment drop and the school closures.

According to the memo from Bavaria District superintendent Ronald McIntire, the schools will close by July 15, 2006. The memo also mentioned that the 2007-2008 school year could see the closure of all schools in the W&#252;rzburg area.

But it served only to put a date on what the teachers have known was coming.

&#8220;The general feeling is that people have seen the handwriting on the wall, and they have begun to look at other schools,&#8221; said Gary Kleeman, a career practicum and business teacher from W&#252;rzburg High School.

&#8220;We know it&#8217;s going to happen, and people are already making preparations to transfer out. It came as no surprise. We&#8217;ve had plenty of information from the superintendent, the military and the newspapers.&#8221;

Kleeman, whose school will be open at least another year, plans to retire next year after having taught at the school for 34 years.

Sherry Meisetz, an eighth- grade language arts teacher, has been teaching at W&#252;rzburg Middle School since it opened 16 years ago.

&#8220;Other communities have closed schools; we are not the first. It will be a momentous year for the students, teachers and administrators. We are trying to stay upbeat about it.&#8221;