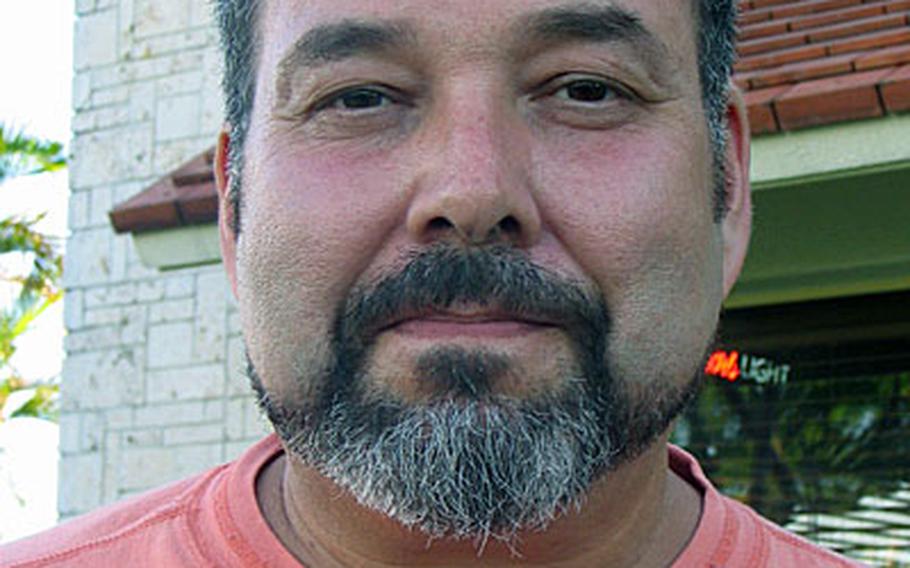 Kubasaki High School social studies teacher David Jones has had plenty of time to think about Japanese justice. For more than a month his home was a 6-foot by 12-foot solitary cell. (David Allen / S&S)

NAHA, Okinawa &#8212; High school social studies teacher David Jones has had plenty of time to think about Japanese justice. For more than a month his home was a 6-foot by 12-foot solitary cell.

Jones, awaiting trial in Naha General District Court for possession of marijuana, sent a letter to Stars and Stripes relating his regret at letting down his family, friends and co-workers and warning others to stay straight.

Jones taught at Kubasaki High School until he was placed on administrative leave pending the results of an internal Department of Defense Dependents Schools investigation prior to his arrest May 21. A search of his off-base home in Chatan, near Kadena Air Base, by Japanese narcotics officers and agents with the Naval Criminal Investigative Service turned up a marijuana plant and pipes containing traces of pot.

A Japanese police spokesman said it is believed Jones kept the marijuana for his own use. Jones faces a maximum sentence of seven years in prison and his first hearing is scheduled for July 12, his 47th birthday.

Being held in a Japanese jail is no picnic, Jones warns.

&#8220;All of your personal belongings will be confiscated and meticulously listed, from your wedding ring to your underpants,&#8221; he wrote. &#8220;You will be issued a set of clothes, assigned a number and a 6-ft. by 12-ft. cell. Your cell will have a toilet, sink, bookshelf, tatami bed with a one-inch mattress and an old style U.S. military frame, and a desk and a chair. Regulations require that you sit at the desk each day, except for scheduled exercises and a one-hour siesta in the afternoon.&#8221;

Jones said he had to sit at the desk for hours, not allowed to exercise or do anything other than read and &#8220;think about my family and all the people I let down and hurt.&#8221;

He has lived on Okinawa for 19 years, but fears that once his legal ordeal is over, he will have lost his teaching job and will have to move away from the island he loves.

After each workout, he said he got a four-minute cold shower without soap. Regular showers were scheduled three times a week for 12 minutes on Monday and Friday and four minutes on Wednesdays.

The cell was hot and sticky, he wrote. There is no air conditioning and the lights are on 24 hours a day. There&#8217;s no mingling with other prisoners and he ate his meals, which usually consisted of miso soup, rice, different Japanese dishes and green tea, in his cell.

He claims he lost 15 pounds during his confinement.

Before indictment, which took place June 13, his only company, he says, were the &#8220;bugs, gnats and termites (that) crawl around and on you, your bed and clothing.&#8221;

After a person is indicted, they are allowed two visitations a day for 30 minutes each. Those visits were almost as hard to take as the solitude, he wrote.

&#8220;As simple and wanted as a family visit sounds, you will face them humbled and shamed, as your crime, by this time, has hit the front page news, along with details of your loving family who are the sideline victims of your crime,&#8221; he wrote.

Jones, a DODDS teacher for six years, is married to a middle school special education teacher. They have three daughters. According to a teacher familiar with the investigation, Jones&#8217; wife also was placed on administrative leave.

A third Kubasaki High instructor, an English teacher with more than 20 years in the DODDS system, was reportedly also placed on leave in connection with the internal DODDS investigation of Jones.

DODDS-Pacific officials said placing personnel on administrative leave pending an investigation does not necessarily mean they are suspects.

Jones said it is hard to face his visitors.

&#8220;The amount of people you have let down will have already come to full realization, as all of those people who relied on you to do your job, such as supervisors, also come visiting,&#8221; Jones wrote. &#8220;There are no words that can fully encompass your regrets and sorrow. You pray for forgiveness and atonement while your legal and personal future is in someone else&#8217;s hands, because I&#8217;m sorry is just not enough.&#8221;

Although his lawyer, Toshimitsu Takaesu, said the letter may be introduced as evidence of remorse, which is weighed heavily in determining sentences in Japanese criminal courts, Jones said that was not his intent.

In an interview Thursday, the former Army paratroop said he wanted to warn other Americans in Japan to be careful with their behavior.

&#8220;We get very comfortable and think we&#8217;re still in America and living by American morals and values,&#8221; he said. &#8220;But this is a different culture and things you might not think are very serious are, in fact, extremely serious.