DODDS teacher reunites with Kadena troops who saved him 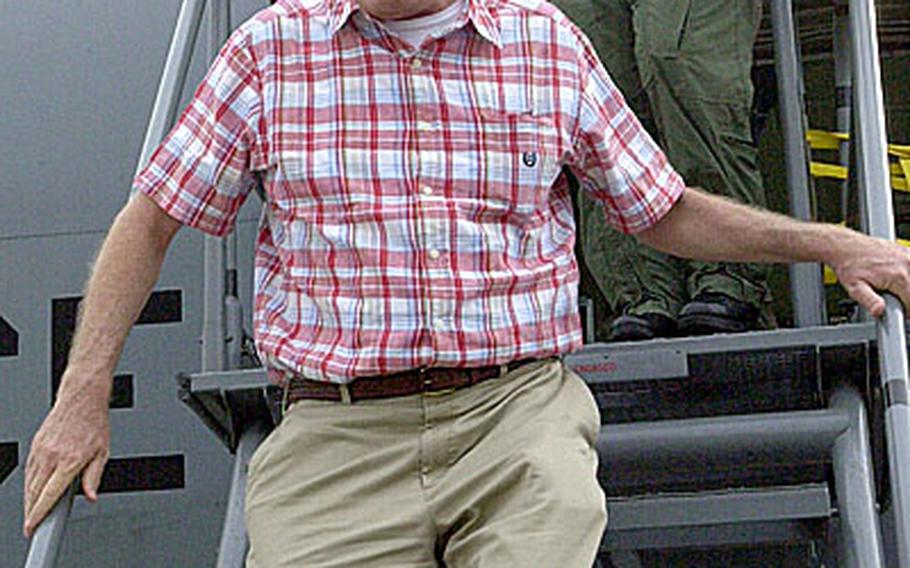 Jim Brierly, 57, carefully makes his way down the stairs from KC135 Wednesday. He toured the craft as part of a reunion with the doctors, nurses and pilots who he says saved his life about a year ago when a medical condition required that he be medivaced to a hospital on Hawaii. (Cindy Fisher / S&S)

Jim Brierly, 57, carefully makes his way down the stairs from KC135 Wednesday. He toured the craft as part of a reunion with the doctors, nurses and pilots who he says saved his life about a year ago when a medical condition required that he be medivaced to a hospital on Hawaii. (Cindy Fisher / S&S) 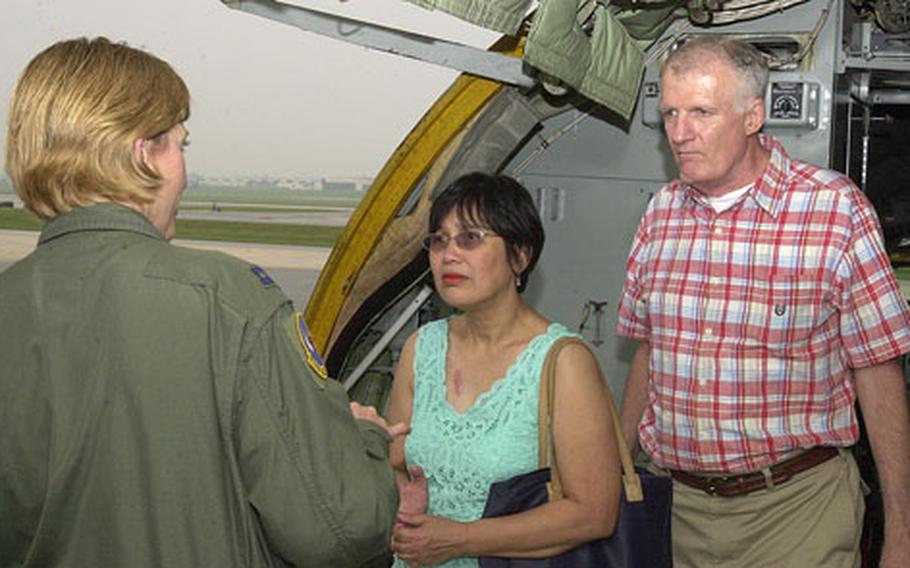 Jim Brierly and wife Maride listen on a KC135 on the flightline at Kadena Air Base Wednesday as flight nurse Capt. Jeannette Ward describes some of the difficulties they encountered during Brierly&#39;s medical evacuation. (Cindy Fisher / S&S)

KADENA AIR BASE, Okinawa &#8212; The day began like any other for Jim Brierly and his wife Maride.

The Brierlys were enjoying the sights, sounds and foods at a festival near Camp Hansen that day when Jim felt the first chest pains.

"I thought I had MSG poisoning," said Brierly, 57, who teaches at Kadena Elementary School.

But the pain was so intense that instead of driving home, they went to the Camp Hansen gate where they would meet the first of their "angels," he recalled last week.

The Marines on duty immediately called for an ambulance, which rushed Brierly to U.S. Naval Hospital Okinawa on Camp Lester.

"The last thing I remember clearly is the ambulance getting off the expressway," Brierly said. "Three weeks later, I woke up (in a hospital) in Hawaii wondering where I was."

Though Brierly talked to doctors at the hospital, he can&#8217;t recall much about his time in the emergency department.

Cmdr. Sharon Troxel remembers, though. She was on duty at the hospital when the heart-attack patient arrived at Camp Lester.

"I noticed he didn&#8217;t look good," said Troxel, head of the emergency department.

In fact, Brierly&#8217;s heart stopped beating while he was talking to Troxel.

For 34 minutes, Troxel and her team worked to resuscitate him: defibrillators, aggressive cardiopulmonary resuscitation and drugs.

"He was a fighter, you could tell," Troxel said, recalling his intense physical reactions as they tried to revive him. "That told me that he still had a lot of fight left him."

After revival efforts and treatment for his heart attack, Brierly was too unstable to be moved to a civilian hospital, Cole said. To complicate matters, Brierly&#8217;s heart was so damaged it couldn&#8217;t provide sufficient blood to the body.

The consensus: Brierly need an intra-aortic balloon pump &#8212; a mechanical device that increases circulation with less work for the heart.

The problem: one wasn&#8217;t available on Okinawa.

"Our best option was to move him" but the nearest facility was Queen&#8217;s Medical Center 4,600 miles away in Honolulu, Cole said.

"It was a risky venture, but the Air Force has a lot of experience" moving critically ill patients, he said.

The plane&#8217;s altitude and resulting cabin pressure was not good for Brierly&#8217;s condition.

"At one point, I thought we might have to turn back to Okinawa even though we didn&#8217;t have the resources there for what he needed," she said.

The flight&#8217;s halfway point was a milestone that brought intense relief, she added.

After 13 hours, the plane reached Hawaii, where Brierly was treated and placed in a three-week-long induced coma.

When he awoke, "the first thing he did was get into the computer to see how much I had been spending," said his wife Maride. "I knew he was all right."

"Normally, even if you cardiac arrest in a hospital, there is a 15 to 20 percent survivability rate" he said. After 30 minutes of resuscitation efforts, he added, the percentage for meaningful survivability drops to 2 to 3 percent.

Brierly, a Department of Defense Dependents Schools teacher since the 1980s who has taught on Okinawa since 1992, returned to Kadena Elementary last fall.

A little more than a year since the attack, Brierly and his wife welcomed the chance last week to thank some of his rescuers.

He told assembled pilots, nurses and doctors that he is grateful for the second chance they gave him.

"Everything just fell into place to save my life," Brierly said, "from the Marines at Camp Hansen to the Naval hospital, to the Air Force doc and pilots who flew me to Hawaii.