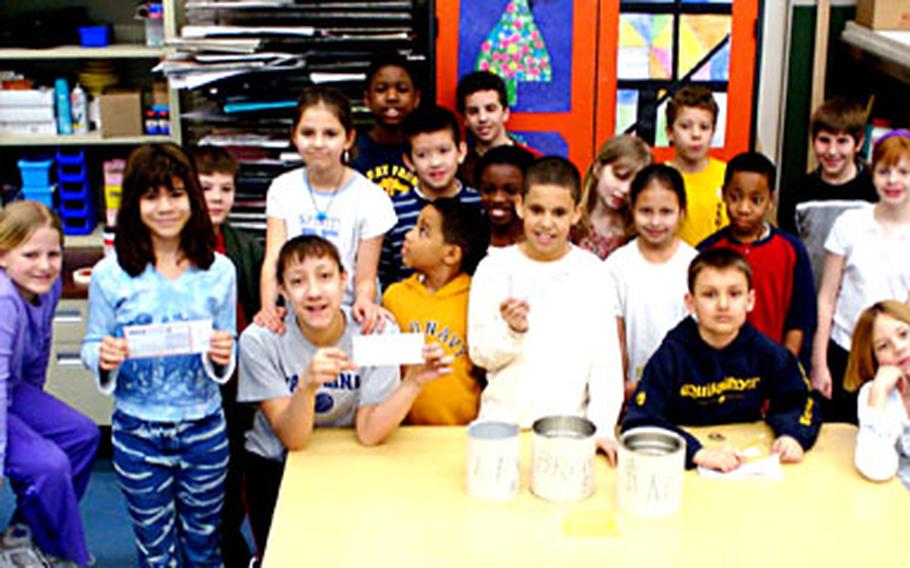 Members of the student council at Patrick Henry Elementary in Heidelberg, Germany, pose with checks and some of the cans they used to collect change in a fund drive that raised over $1,500. (Courtesy of DODDS)

Department of Defense Dependents Schools students and staff members used a combination of fund drives and special events to raise thousands of dollars in support of tsunami relief efforts, according to school system officials.

Many schools held drives to collect spare pocket change, and others launched carnival-like activities to raise money to aid those displaced by the Dec. 26 Indian Ocean tsunami.

The death toll has been estimated to be as high as 310,000, with thousands more left homeless.

The money raised was sent to a variety of charities and relief organizations.

The senior class at Alconbury High School in England raised money by taking bids on the chance to throw a whipped cream pie at one of two teachers who volunteered to be victims, said Dr. Thomas Smith, principal.

Held during a school pep assembly, the contest, along with a bake sale and basketball competition, raised $1,302.

&#8220;This was done while the tsunami was still fresh on everyone&#8217;s minds, and the students realized how significant the fund-raising events were.&#8221;

&#8220;The children knew that they were doing something to help the tsunami victims, but they were also having fun in raising the money,&#8221; said Mary Fielding, a compensatory education teacher at the school.

While the events at the elementary school were teacher-driven, the students were actively involved in the fund-raising and learned a lesson about helping people in need, Fielding said.

&#8220;We were glad to see that the kids understood that this was such a cataclysmic event, and that they really wanted to get involved and do what they could to help.&#8221;

A sampling of fund-raising projects by Department of Defense Dependents Schools-Europe students and staff. The amount raised is listed when available:

Aviano Middle School, Italy: 31 pupils raised $3,206 at the Base Exchange.

Ramstein Intermediate School, Germany: Pupils did extra household chores to earn $1 per chore, and many teachers and parents matched funds to raise $1,400.