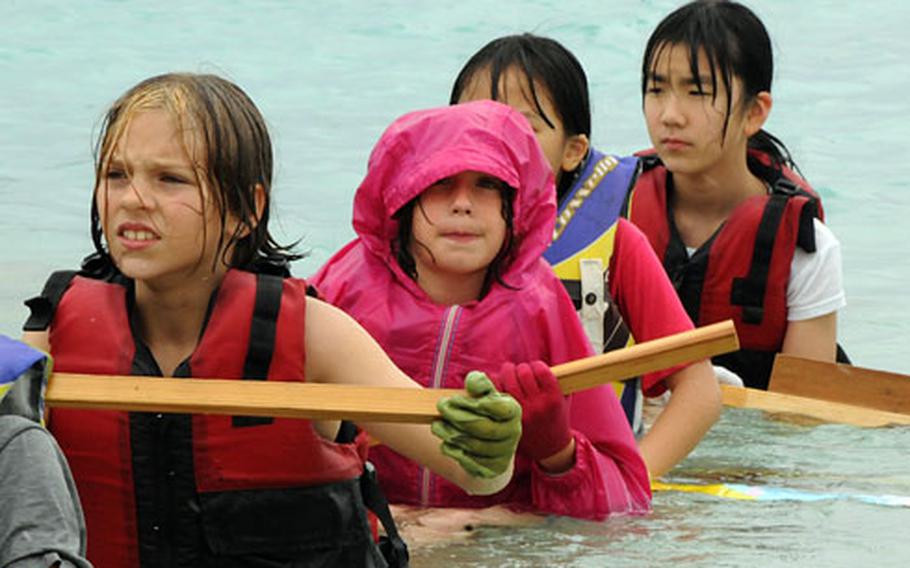 Taryn Sobey, left, 10, a fifth-grader from Camp Foster’s Zukeran Elementary School, and other children paddle the bamboo raft they built at Yoron Island, Japan, on Tuesday. “It was fun and hard and cold,” Taryn said. Below: Joshua Thomas, left, 11, and Jerry Dubois, 11, build sand forts. (Photo by Cindy Fisher/S&S)

The 108 fifth-graders from Department of Defense Dependents Schools-Okinawa left the island Saturday to participate in the Yoron Island Adventure School.

The Yoron school is an International Youth Association of Japan program in which Japanese youth build relationships with children of other countries. Students from DODDS-Okinawa elementary schools have participated since 1977.

This year, more than 350 Japanese, American and Indonesian children gathered at Yoron Island, where the program is held each year. The small, rural community is about 50 miles north of Okinawa.

The children lived in minshukus &#8212; Japanese-style hostels &#8212; in groups of 40, with about 14 Americans in each group. Highlights of the trip included visiting a sugarcane factory, holding dragon boat races and building bamboo rafts.

There were many new experiences for the American kids, said Terry Johnson, a teacher at Camp Foster&#8217;s Killin Elementary School and the program&#8217;s American coordinator.

Some of the fish was unrecognizable, and some was a little weird, said Kaleb McNair, 11, a student from Camp Foster&#8217;s Zukeran Elementary School.

But "we tried it, and it was really good," Kaleb said.

Japanese fish and eggs were a little hard to swallow for Tristyn West, 10, a student from Camp McTureous&#8217; Bechtel Elementary School.

"They taste really different," Tristyn said, adding that he has become a pro with chopsticks.

For Kadena Elementary School&#8217;s Jessica Driver, 10, sleeping on a tatami mat was unexpected.

However, it&#8217;s been exciting learning Japanese from her new friends, Jessica said, smiling as she talked about them.

And even though it rained during parts of each day, it didn&#8217;t dampen the spirits of the children or stop them from taking bamboo-raft rides in the water Tuesday.

"Only here could we go out in this kind of weather," Jennifer Birkhead, a parent-chaperone, said as she shivered in the cold.

The program "has just been a surprising insight into the Japanese culture," Birkhead said.

From the experience, Birkhead said, she wants her daughter to gain "more appreciation for the Japanese and a simpler way of life."