DODDS students in Pacific return to classrooms after summer break 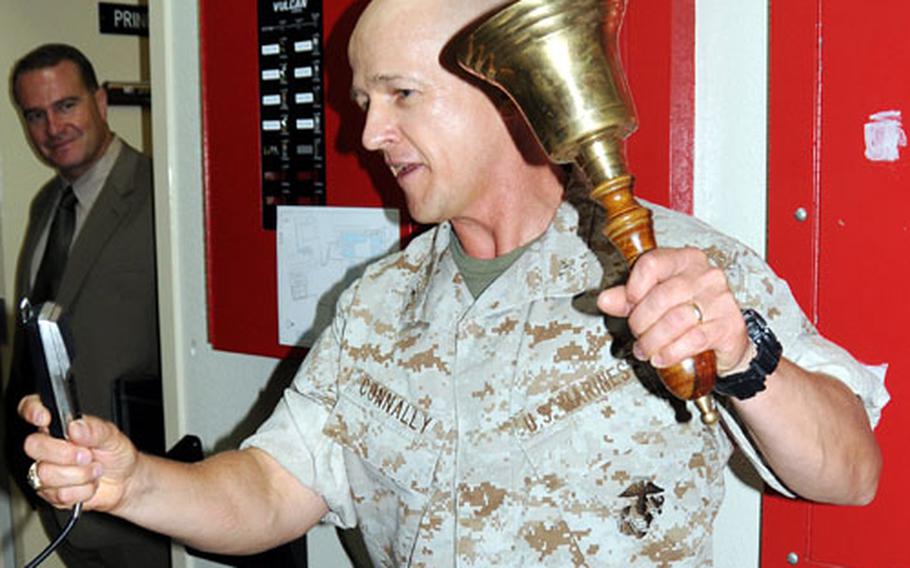 "I was pretty nervous. Things are totally different now," said Misner, who attends E.J. King High School at Sasebo Naval Base in Japan. "I don&#8217;t know where to sit, and I don&#8217;t know a lot of the teachers."

For her mother, Tina Misner, the start of school was bittersweet &#8212; it meant the end of summer together.

"I kind of like hanging out with my children," she said.

Monday was the first day of classes for students at Department of Defense Dependent Schools in the Pacific. About 23,000 students attend schools in mainland Japan, Okinawa, South Korea and Guam, according to DODDS-Pacific spokesman Charles Steitz.

McCool Middle School on Guam, the newest facility in the school system, is to begin classes on Wednesday.

The first day at Seoul American Elementary School was punctuated by excited laughter and nervous goodbyes.

Sasebo&#8217;s first day went off without a hitch &#8212; something the school hopes to repeat every year &#8212; and students were happy to be back mingling with classmates, Sasebo Elementary School Principal Christy Blevins said.

Joe Schmieley, 15, who moved to Japan from Virginia three months ago, started his sophomore year at E.J. King.

"They&#8217;ve been really friendly. If you&#8217;re lost, you just ask one of them in the hallway and they will point you in the right direction," he said.

In Okinawa, a sea of umbrellas dotted the rain-swept entrance of Bechtel Elementary School on Camp McTureous. A heavy downpour made the typically hectic first day even more so, said Melody Howard, a Parent Teacher Organization volunteer whose son and daughter attend Bechtel.

"The rain threw us off course &#8212; totally off &#8212; but, everybody got where they were supposed to go," Bechtel Principal Joe Masters said.

Madison Askins, 6, said she was excited about starting first grade at Bechtel even though she doesn&#8217;t know what to except that it&#8217;s "different from kindergarten."

Many kindergarten-aged children had mixed emotions about the big leap.

"My son&#8217;s not too thrilled about going to school and leaving Mommy," said Bobbi Watson, who was at Bechtel for a kindergarten parent orientation.

Five-year-old Faith Bremer had a brighter view of kindergarten after her mother took her for a visit to Osan American Elementary School in South Korea.

"I want to read a lot," she said, and looks forward to being able to read "a whole book by myself."

"And also," her mother said, "I hope she develops a love of math. She&#8217;s got the enthusiasm, so I hope it just spills over into everything."