DODDS students from across Europe try their hands at United Nations 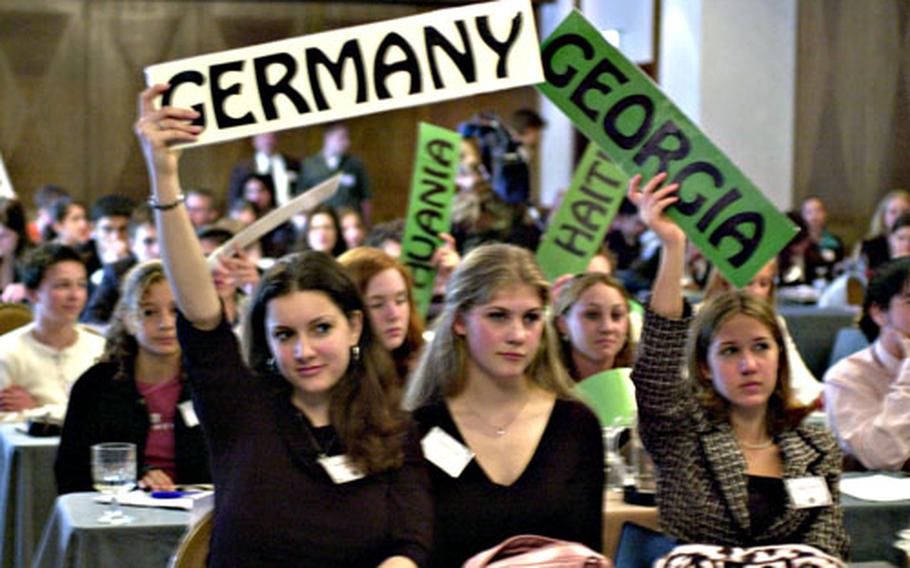 Students representing countries from around the world hold up their placards during a vote Tuesday at the Model United Nations conference at Ramstein Air Base, Germany. (Scott Schonauer / S&S)

The conference is similar to a much larger gathering of high school, would-be diplomats at The Hague, where roughly 3,800 students from around the world meet annually.

Phillipp Schmoll, a history teacher at Ramstein American High School, said the reason teachers and students put together a smaller conference is to allow students a greater chance to debate world issues. Participants are all members of their local schools&#8217; U.N. clubs and some of them will participate in the larger meeting at The Hague.

Each student represented a country as a delegate during the meeting and presented resolutions to some of the biggest problems facing the international community. In a twist, the teens could not represent their home country.

That means admittedly shy students such as Michael Kane, a junior from Ramstein American High School who gets nervous speaking in front of a crowd, had to combat his own oratory demons and represent Norway.

While timid orators gained courage, other students made friends. The conference served as an opportunity for participants to meet students from other countries.

Teens from Russia, Norway and Ukraine stayed with American sponsors during the two-day conference. For some, it was the first chance to experience how an American family lives.

Olen Mykhalchenko, a 16-year-old student from Kiev, Ukraine, said she was surprised at how much her host family ate together. At her home in the former Soviet state, she said she rarely got the chance to eat dinner with her parents.

Mykhalchenko earlier this year joined thousands of protesters who thought a Russian-backed candidate robbed the popular Viktor Yushchenko of the presidency. Yushchenko later became president. During the conference, she represented Mexico.