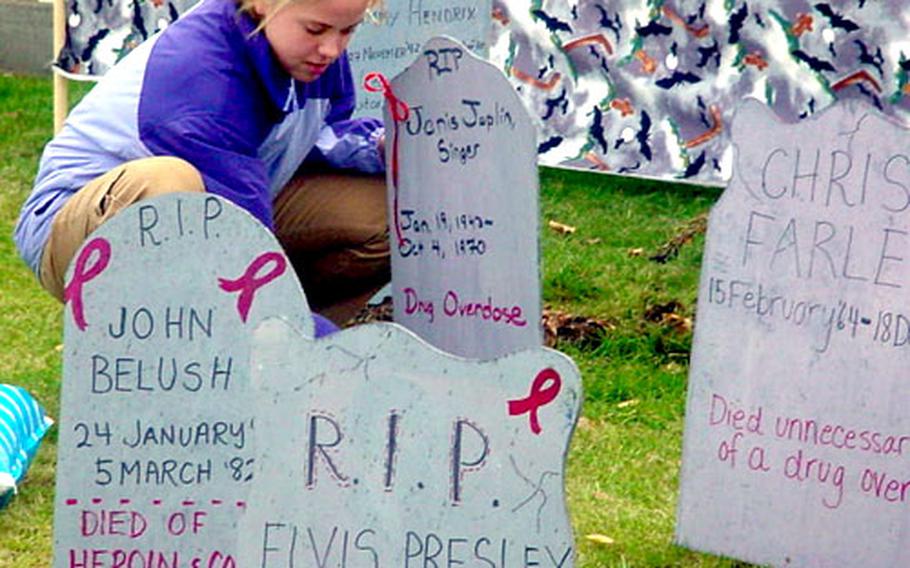 Ashely McNamara, 12, adjusts tombstone Friday in a mock graveyard of celebrities who died from drug-related causes. The celebrity graveyard is one of several student activities in observance of national Red Ribbon Week, which takes place in the last week of October. (Courtesy of U.S. Army)

BAMBERG, Germany &#8212; Students at Department of Defense schools in Europe have had drugs on their minds a lot lately.

And that&#8217;s exactly what their teachers and community planners were hoping for.

During the past week, communities and Department of Defense Dependents Schools have been conducting activities as part of national Red Ribbon Week, an event that puts the spotlight on drug and alcohol abuse awareness. Most activities end Thursday.

&#8220;The one message we&#8217;re trying to get across, and the reason why I come to work every day, is that I think alcoholism is preventable and treatable,&#8221; Kelly said.

In Mannheim, the high school career coordinator says the students are spreading the message she hopes to get across during a week of activities.

&#8220;I hope the message they are getting is that they can make a difference,&#8221; said Rosalind Rutledge, who coordinated many of the school&#8217;s Red Ribbon events at Mannheim High School.

Among the activities were an essay contest and an all-star basketball game, Rutledge said.

At H.H. Arnold High School in Wiesbaden, students prepared a drug-awareness video that is being broadcast throughout the school.At Vicenza High School in Italy, the school nurse and Adolescent Substance Abuse Counseling Services counselor launched a drug awareness campaign that focused on specific subjects each day, such as the dangers of smoking and the effects of using inhalants.Events at Lajes Elementary School in the Azores included &#8220;sock it to drugs&#8221; day with students wearing their most unusual socks, and &#8220;hats off to being drug free&#8221; during which students wore a favorite hat.Incirlik Elementary School in Turkey had visits from base security forces who spoke about drug awareness, and a &#8220;wear red&#8221; day, among other events.Kelly said the effort begun during Red Ribbon Week should continue throughout the year.

The first Red Ribbon Week was in 1988, in honor of Drug Enforcement Administration agent Enrique &#8220;Kiki&#8221; Camarena, who was murdered in 1985 while investigating a drug cartel in Mexico.

Since its beginning 15 years ago, the campaign has become nationally observed and has become a drug awareness tool to make students and adults aware of the risks of alcohol and drug abuse.