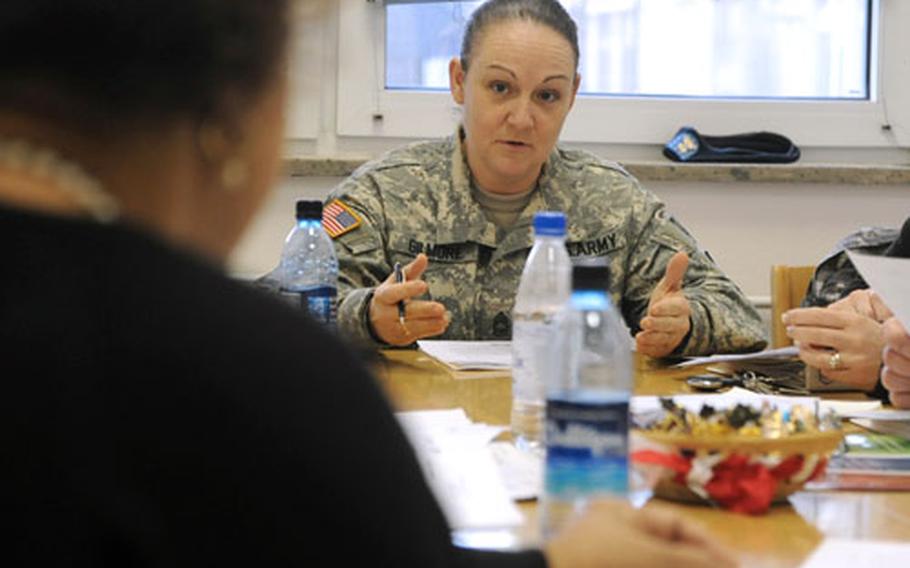 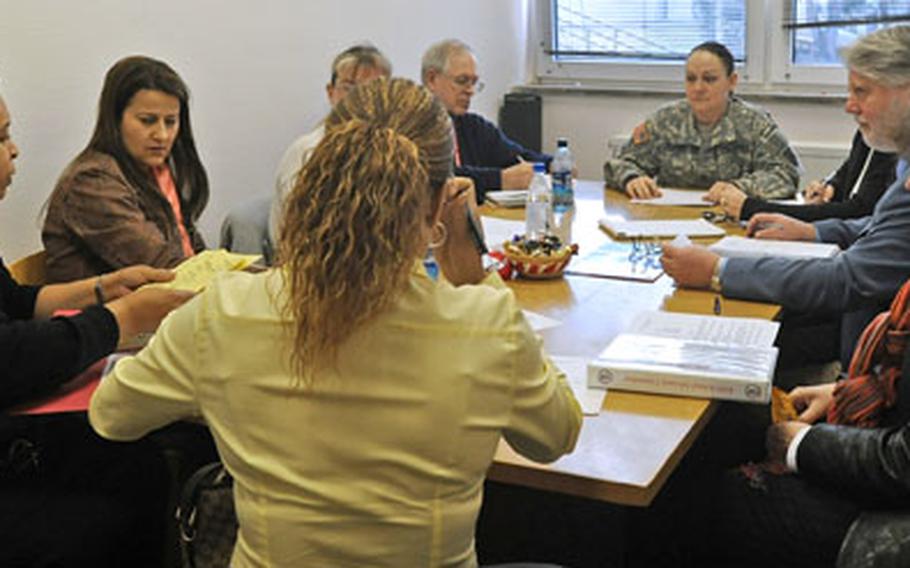 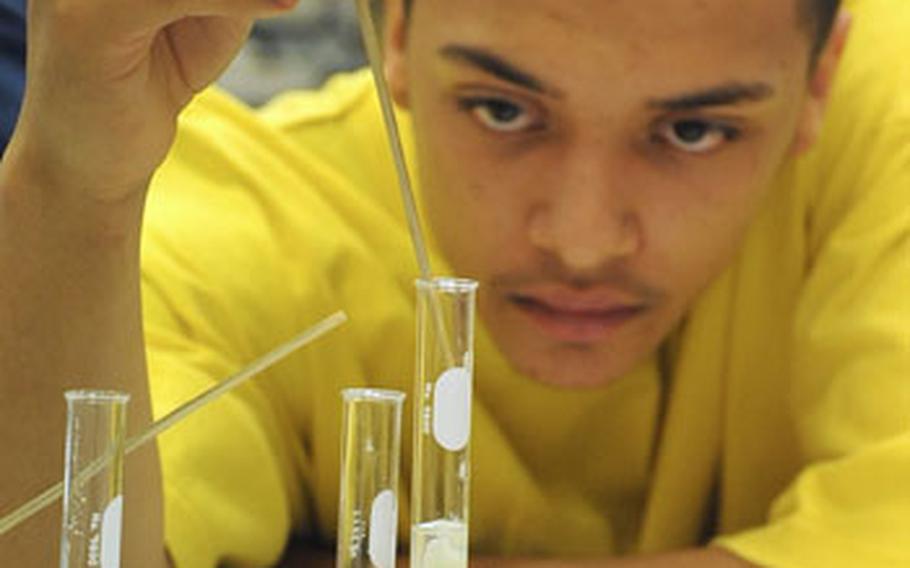 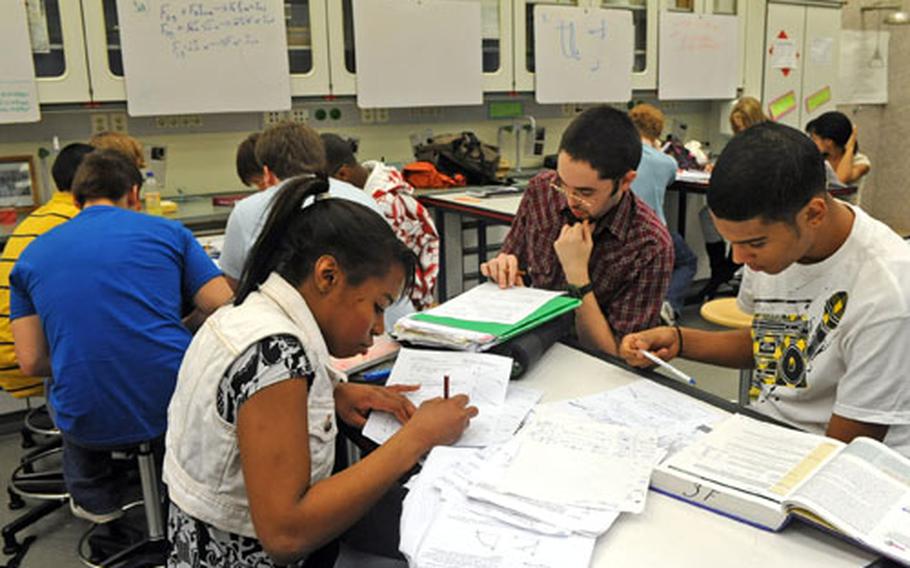 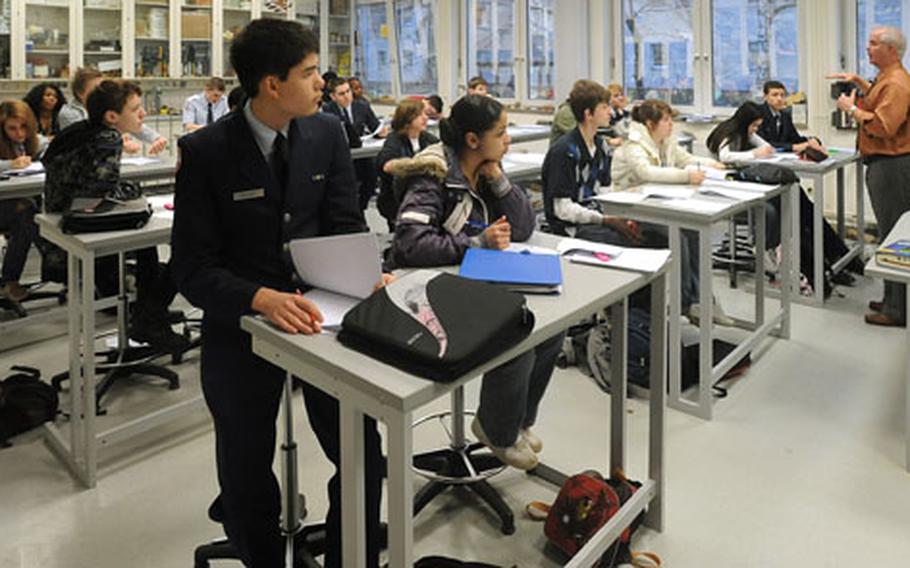 The answer is the same, regardless of which Department of Defense Dependents School your child attends: the School Advisory Committee.

At Patch Elementary School in Stuttgart, one of the issues that popped up during a recent School Advisory Committee meeting was the need for more communication from some teachers.

"How as a parent do we address that?" asked parent Grace McKerall, directing her question to the SAC members. "Many parents are frustrated."

The School Advisory Committee, or SAC, is a starting point at DODDS for looking at such issues. It is where principals hear from a committee of parents and teachers, who provide advice on a range of issues within the school. The meetings also are where overseas parents can make their voices heard.

Every school in the DODDS system has its own SAC to wrestle with those issues, but not everyone seems to know what they are, let alone when their meetings are held.

"SAC? What&#8217;s that? I&#8217;ve never heard of it," said Debbie Lucas, the parent of a Kaiserslautern Elementary School student. Lucas, who was waiting to pick her child up from school because of concerns about lack of discipline and "mooning issues" on the bus, said she&#8217;s made some complaints to the school but hasn&#8217;t seen much action.

Indeed, the very existence of School Advisory Committees seemed to be something of a mystery to numerous parents waiting for their children at the end of the day on a recent afternoon in Kaiserslautern.

"I don&#8217;t even know what that (a SAC) is," said Charlene Anderson, another parent who also reported concerns about bullying on buses. "You complain [to the bus office] and nothing gets done."

From welcome packages that outline how to become involved to promotions in installation newspapers and information on its Web site, DODDS tries to put the word out in many forms, according to Margret Menzies, a DODDS-Europe spokeswoman. But in military communities where the population is constantly turning over, it&#8217;s a constant battle.

"It&#8217;s always a challenge. We never have enough parent involvement and we are always seeking more," Menzies said. "For us, it is a constant education process."

As part of the incoming briefing process, families learn about the DODDS structure and how to get involved, according to Wayne Boswell, U.S. European Command&#8217;s quality-of-life chief.

Boswell said his staff spends much of its time focusing on education issues.

"Schools make up a large part of [quality of life]. When people arrive in theater, the first things they ask about are housing and schools," Boswell said.

Nonetheless, DODDS and its position within the military apparatus can&#8217;t avoid hunkering down sometimes.

For example, in the Baumholder community last school year, parents at Neubruecke Elementary were jolted by a sudden end-of-year announcement. The school would close the following year as part of transformation. There was no public hearing, and many parents &#8212; some of whom moved for the purpose of sending their kids to the school &#8212; were angry.

Sue Gurley, DODDS chief of staff in Europe, said such circumstances are unique. When it comes to transformation, for instance, there is classified information involved, and that prohibits notification and debate.

"We have to be very cautious that we don&#8217;t step out in front of something that&#8217;s a required public announcement," Gurley said.

But when it comes to the day-to-day business of what goes on in the schools and providing parents with avenues for addressing their concerns, the numerous committees and the chain of command structure has proven effective over the years, she said.

"Once people know and understand it, then they will use the SAC process," Gurley said.

SACs are required to meet four times a year, though some elect to meet more frequently. The Patch Elementary SAC is one of the busier groups. They gather It meets once a month, maintains minutes of meetings and posts those minutes on the school Web site.

Susan Sigmon, chairwoman of the Patch Elementary SAC who also served on the same committee when her family was stationed on Okinawa, said that while the issues may differ from place to place, the group of volunteers are effective at getting into the "meat and potatoes of what&#8217;s happening in the school."

One thing Sigmon would like to see change is to have more parents come out to the meetings, though.

"It gives them a great snapshot into the interworking of the school and how things work and what goes on behind the scenes," she said.

Some research suggests this chain-of-command environment, where both military and school leaders have a hand in the education pot, translates into better classroom performance.

"The culture of order, discipline, education and training in the military community creates ideal conditions for schools focused upon these principles and expectations," wrote Claire Smrekar, a Vanderbilt University professor who authored a 2007 report on how the culture of military communities contributes to the higher achievement levels of DODDS students.

Scott Haines, the IMCOM-Europe DODDS-E liaison, said the partnership between the military and the school system is the way to make sure schools have the necessary programs.

"It&#8217;s partly the military knowing the needs of the community," he said. "The focus is to try to get both the community and the school involved in issues and get them resolved at the lowest level."

With education, disagreements aren&#8217;t uncommon and passions can flare on occasion.

"You have to work well together and respect the professional opinions and judgments of others," Sigmon said. "Sometimes you have to agree to disagree. Everyone is trying to be a good advocate for the children though."

Back at the recent Patch Elementary SAC meeting, the committee debated what to do about the issue of teacher communication.

Sigmon reminded those in attendance: "We can&#8217;t set policy."

"Can you make a recommendation?"

SAC member Kirk Coker responded with a motion asking the principal to examine whether a policy could be enacted that requires teachers to submit weekly reports to parents that summarize what was covered during class, a first step in responding to the parent&#8217;s concern.

For parents, the SAC meetings also are a place to get an early heads-up on potentially big changes.

At Patch Elementary, there was mention of the possibility of fifth- grade students being relocated next year to Robinson Elementary, on the other side of town. The high school, in need of space, may need some of Patch Elementary&#8217;s classrooms.

"Has the staff been informed?" asked Jan Lowry, a teacher representative on the SAC.

"This is my first statement about that," said principal Robert Allen, explaining that the subject just came up at an earlier meeting.

Changing the subject, Sigmon told the group "We&#8217;ll have more discussion of that in Item 6."