DODDS prepares for varying reactions from pupils dealing with deployments 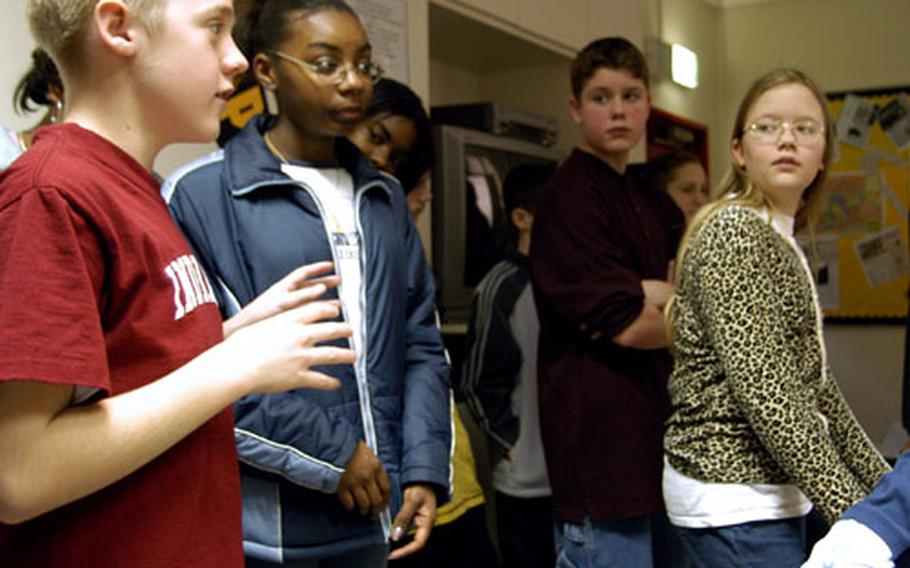 His classmates listen as Heidelberg Middle School seventh-grader Eric Finke, 13, left, discusses his thinking on Islam in one of teacher Sylvia Rausch&#39;s seventh-grade geography classes. With many parents of DODDS students deploying to the Middle East, Rausch is weaving current events in with the geography and the history of the area, so the kids have a better understanding of where their parents might be going. (Michael Abrams / S&S)

His classmates listen as Heidelberg Middle School seventh-grader Eric Finke, 13, left, discusses his thinking on Islam in one of teacher Sylvia Rausch&#39;s seventh-grade geography classes. With many parents of DODDS students deploying to the Middle East, Rausch is weaving current events in with the geography and the history of the area, so the kids have a better understanding of where their parents might be going. (Michael Abrams / S&S) 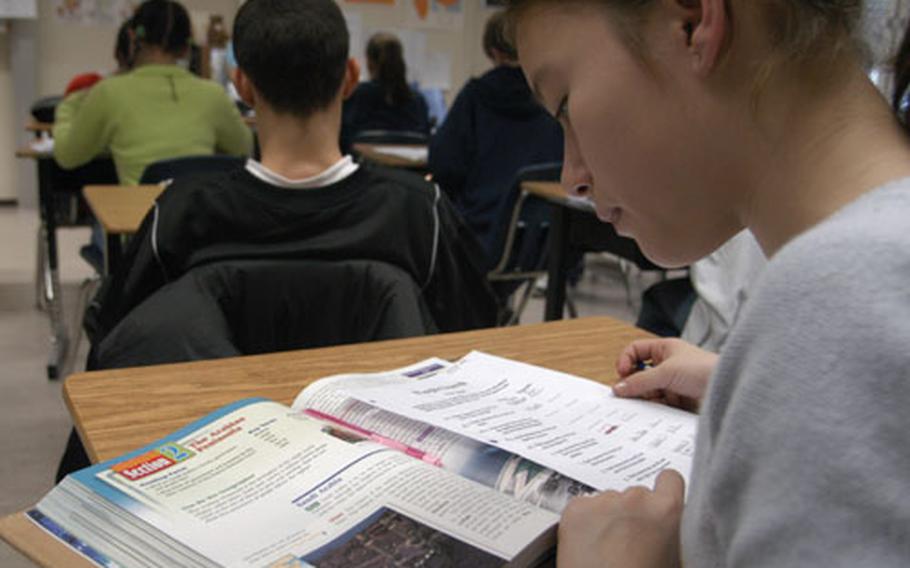 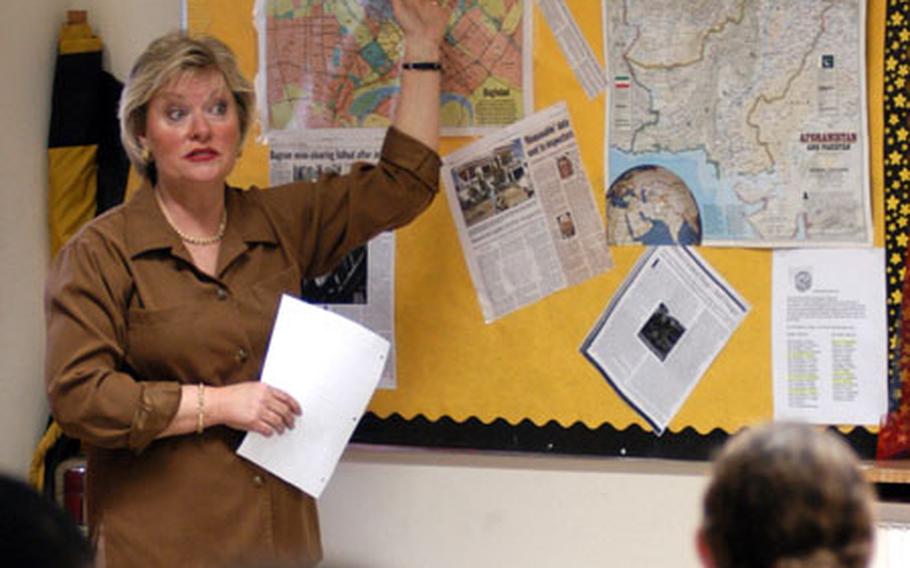 Standing in front of a pin-board with a map of Baghdad and Afghanistan and newspaper and magazine clippings of the Middle East, Heidelberg Middle School teacher Sylvia Rausch discusses current events with her seventh-grade pupils. (Michael Abrams / S&S)

But the fairy tale setting is still not beyond the clamor of war, nor are its children.

With a possible invasion of Iraq on the horizon, new charges against alleged local bomb conspirators and a nightly blizzard of television terrorism to digest, an American middle school teacher finds her students vexed.

They fear all things Islamic. They believe Iraq is a nation of nuts. And they also ride a wave of quiet distress as their military parents are tapped or eyed for duty in the Persian Gulf.

Sylvia Rausch &#8212; like so many teachers at Department of Defense Dependents Schools abroad &#8212; has found that the Iraq crisis and the war on terror have entrenched themselves into her students&#8217; minds and daily lives.

In response, DODDS-Europe has beefed up a crisis management manual that tackles grim eventualities, from the loss of military parents on faraway battlefields to terror attacks at home.

Spokesman Frank O&#8217;Gara said principals have been ordered to plan alongside family counselors and military commands. Meanwhile, schools seek ways to help teenagers obsessed with grim news and younger children who play soldier in the schoolyard as a tribute to absent parents.

Teachers acknowledge that their students are acting up more than usual, while at the same time admitting surprise that things aren&#8217;t worse.

Gretchen Ridgeway, head of crisis management for the schools in Europe, said administrators began revamping the crisis guide shortly after the attacks on New York and the Pentagon.

Now, with another Gulf War threatening to detonate, the move seems particularly prescient.

&#8220;This deployment and upcoming conflict fit into that framework,&#8221; Ridgeway said.

Schools across Europe have organized crisis teams made up of teachers and staff who meet regularly to plan for unwelcome possibilities. Psychologists are even preparing for a scenario in which an entire military town is rocked by grief and war casualties. Scores of counselors would travel there from other schools.

Leaders are also trying to ensure they don&#8217;t duplicate the efforts of local military commands. And principals are asking families to notify schools if a parent is off to the Middle East.

&#8220;The kids are acting up more in school,&#8221; said Holly Hasenbuhler, a psychologist at Ramstein Elementary, which serves the mammoth air base in Germany. &#8220;The response varies from child to child. We&#8217;re trying to get a sense of the number of families that are deployed &#8230; so that if a child responds differently to than what we&#8217;re used to seeing [we know why].&#8221;

In Heidelberg, Rausch notices her students were changed by that footage of airliners slamming into skyscrapers &#8212; and she doesn&#8217;t mean that as a sentimental clich&#233;.

Her task was made no easier when a German-born Turk and his American girlfriend, an exchange employee, were arrested in Heidelberg in September for allegedly planning to bomb an Army headquarters. Both were charged Wednesday.

Rausch has a unique perspective from which to view these events: She is the wife of a retired Army officer and her sister married an Iranian and lived through that nation&#8217;s own war with Saddam.

These days, she integrates current affairs into her geography lessons. Among the many charts adorning the walls of Rausch&#8217;s classroom is a city map of Baghdad.

Her students struggle to grasp truths beyond latitude and longitude: Bad leaders sometimes lead good people. Though distillable to a single sentence, it&#8217;s not always a simple concept to convey.

&#8220;When you get to world issues where adults have a hard time distinguishing facts from fiction, it makes sense [children] wouldn&#8217;t do anything different,&#8221; Rausch said.

According to a report by the New York University Child Study Center, young children may react to news with worry about their parents&#8217; safety, while older teens may get political. Middle schoolers may want to change the world, too, but they fluctuate between childhood and young adulthood.

Many of these students will weather things just fine if a parent is sent abroad to fight. Others will not. Schools are finding that the key, even with older children, can be how well their remaining parent holds up.

&#8220;It just varies so much, depending upon the family and the child,&#8221; said Robin Norman, a psychologist at the international high school serving Allied Forces Northern Europe, Holland. She herself is a military wife and a mother.

Switch off the hype

Educators dealing with young children often forgo frightening news and instead focus on listening and reassurance.

Instead, Hasenbuhler said elementary schools tell children it&#8217;s normal to be upset when a parent is about to go away or has already gone. But teachers gently insist that students still have jobs to do.

It requires balance. Teachers and psychologists tell children their parents will return home safely, that they&#8217;re well trained and ready for danger.

&#8220;You want to give them hope without denying the reality of the situation,&#8221; Hasenbuhler said.

All this is especially pressing at Illeshiem Elementary in Germany, where about one-third of the 300 students have parents deployed to the Gulf with a helicopter squadron. More may be on the way.

A teacher recently seized a note, as has happened since time immemorial, but found in it a telling message: One boy wrote another to tell him fellow second-graders are playing soldier at recess because with dads off to war, &#8220;we&#8217;re being the big boys.&#8221;

The boys formed a club with a military structure.

Overall, Rucker said she is amazed at how well children deal with the absence of deployed parents. She pondered this mystery, the racket of recess duty still fresh in her mind.