DODDS, parents and students prepare for the next school year 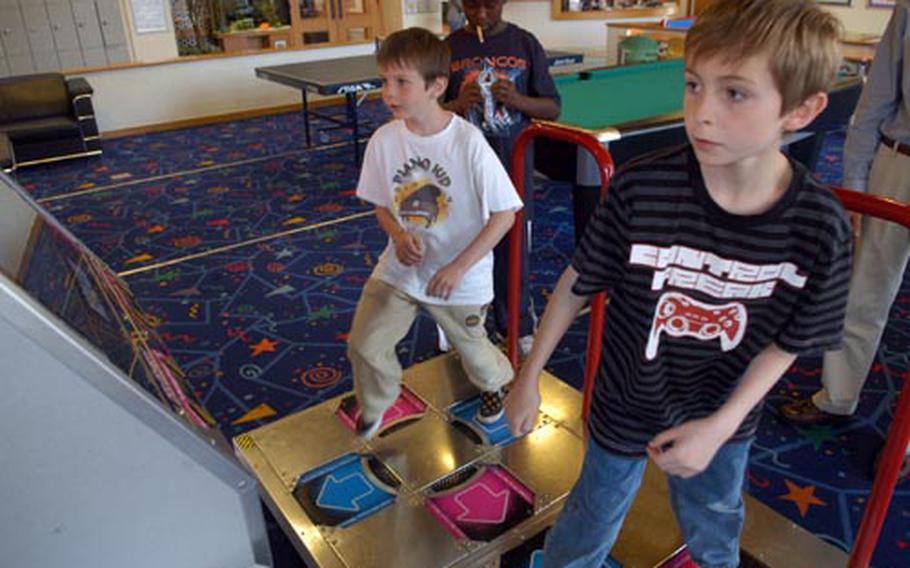 Brothers George, left, and Maxwell Taylor bust a move with a video dancing game at the RAF Mildenhall youth center on a recent afternoon. George, 9, and Taylor, 11, both attend British schools but spend the summers at the base facility. (Charlie Reed / S&S)

Brothers George, left, and Maxwell Taylor bust a move with a video dancing game at the RAF Mildenhall youth center on a recent afternoon. George, 9, and Taylor, 11, both attend British schools but spend the summers at the base facility. (Charlie Reed / S&S) Steve Peasey slathers on some paint last week at Lakenheath High School. Renovations are being completed in anticipation for the start of the new school year on Aug. 25. (Geoff Ziezulewicz / S&S) With school about to kick off another new year, a familiar refrain is being echoed in the halls of DODDS schools in the U.K.: Get your kids registered!

The realities of the military family make this an inevitable and recurring issue, Menzies said.

This week, the schools will be hosting a variety of new student and parent functions, and many high school sports will start practicing in anticipation of the upcoming season.

At Lakenheath High School, finishing touches are being made to a refurbished auditorium, one that serves the entire base community, principal Kent Worford said.

Lakenheath High will host a freshman academy on Aug. 21, followed by new student orientation the next day, Worford said.

DODDS schools and students are unique in that each summer sends some students on their way while welcoming others due to military members transferring.

Re-familiarizing themselves with DODDS schools is a challenge for the new kids, Worford said.

And despite the end of the lazy summer, Worford said most kids seem ready to come back in the fall.

"We have a lot of kids who have been hanging around and looking for something to do," Worford said. "This is their hub and their safe place. They&#8217;re looking forward to this, and they want to see their buddies."

For kids such as 9-year-old George Kunkle, an American student attending British school, the summer break has been a bit shorter than the U.S. equivalent but still packed with fun.

George and his older brother, Maxwell, 11, spent their days off at the RAF Mildenhall youth center.

"I like being around Americans. I have some interest in going to American school," said George, who attends Riverside Middle School in Mildenhall and has an ever-so-slight British accent.

Born in Bury St. Edmunds, George has only attended British schools, something his dad said will give him a "broader perspective in life."

"My wife and I figured as long as we&#8217;re here, why send them to English schools. Then they get the benefit of a whole different experience that will influence them the rest of their lives," said Taylor Kunkle, a civilian treaty compliance officer at Mildenhall.

Coordinating vacations and child care can sometimes be tricky because British and American holidays don&#8217;t always coincide, but that&#8217;s about the only issue the Kunkle said the family has experienced in the British school system.

Still, the curriculum and teaching methods are quite different, Kunkle said.

From religious studies taught through an academic perspective to woodworking, rich arts programs and "food technology," schools seem to offer a broader range of subject aside from the traditional reading, writing and arithmetic.

The Kunkle kids are two of 320 Americans attending non-DODDS schools in the U.K., according to DODDS officials.

Some are from families stationed at installations without DODDS facilities. In those cases, each student is eligible for $44,900 per year for private or public school and other school-related incidental costs such as transportation. DODDS is spending about $28 million this year to educate students in Europe and Africa who do not have a DODDS choice where they are stationed. About 2,300 American students are expected to attend non-DODDS schools on those two continents during the 2008-09 school year.

Supplies neededThe following are Department of Defense Dependents Schools-Europe school supply lists. Check with your school to see what else might be required.

Schools will purchase the following items and have them available in August for the beginning of school.

Applicants sought for Sure Start program

Are you a young family with a military member who is E-4 or below? Are you looking for options for your young ones? If so, Lakenheath Elementary School wants to hear from you.

The program emphasizes comprehensive education in the fields of education, health, social services and family involvement.

There are even taxi services to get the little ones to and from the program, Yahres said.

Children must be 4 years old by Oct. 31 to qualify, and a number of slots are still open for interested parents, he said.

Qualifications for the program include the child being in a family with E-1 to E-4 or GS-1 to GS-4 income; a birth weight less than 5 pounds, 8 ounces; a parent whose primary language is not English; single-parent families; a child with three or more siblings in a similar age range as well as children with siblings who have a severe disability.

Getting the word out that such a program exists will hopefully increase the number of applicants, Yahres said.