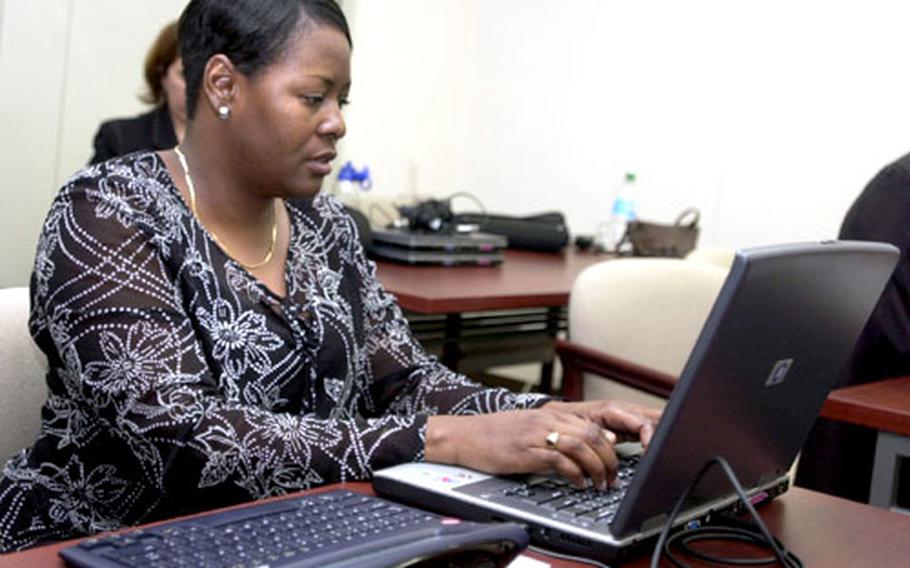 Karen Gordon, a third-grade teacher at Sollars Elementary School on Misawa Air Base, Japan, downloads a math flash-card game from her laptop onto her AlphaSmart Dana computer. (Fred Zimmerman / S&S)

Karen Gordon, a third-grade teacher at Sollars Elementary School on Misawa Air Base, Japan, downloads a math flash-card game from her laptop onto her AlphaSmart Dana computer. (Fred Zimmerman / S&S) 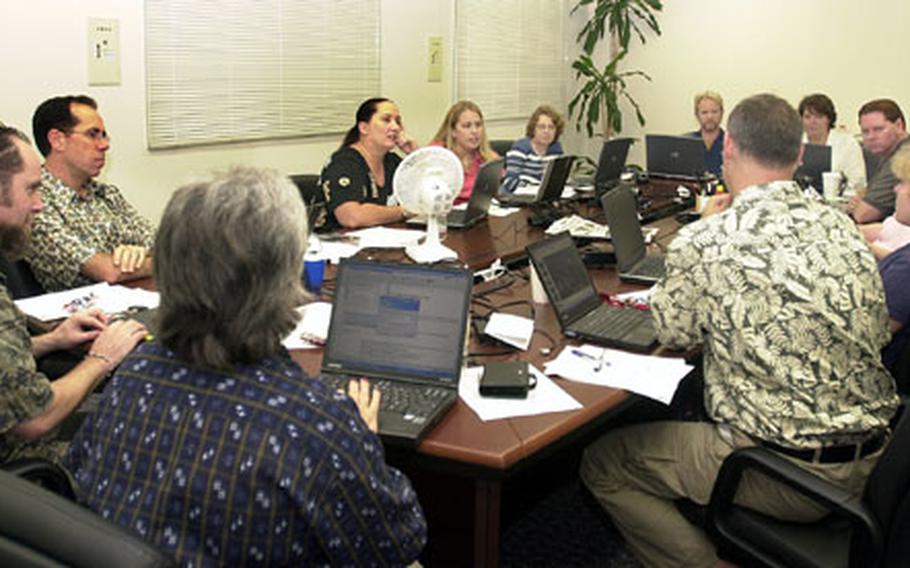 During a conference at Torii Station, DODDS teachers who use the laptop model in the Pacific Technology Project discuss how they use the technology in their classrooms. (Fred Zimmerman / S&S)

Thanks to a Pacific Technology Project, in some Department of Defense Dependents Schools it also describes how students hand in their homework.

The experiment with communications technology in the classroom is testing five different models for using laptops, hand-held computers and personal digital assistants. Five classrooms in Japan, South Korea and Okinawa are taking part in the 18-month project, which began in February.

Gordon said fourth-graders she taught last spring often gather near her door to ask if she wants them to help her new students use Danas.

The computers help students get organized, she said, predicting that by year&#8217;s end her pupils will be able to type properly.

Gordon said she helps the students organize by entering homework assignments into her Dana and beaming them to each student. Her pupils then can complete their homework on their machines and beam it back for grading.

Her class spends about 55 percent of the day on the Dana, Gordon said.

He initially thought computers would best help advanced students but &#8220;we found that students without any music experience were in the class.&#8221; Black said his class has one laptop for every three students &#8212; and one student with slight autism is expressing himself as never before.

The high-tech gear has allowed the class to be more mobile, allowing for more in-depth note-taking while outdoor research is conducted, she said, calling the portable computers &#8220;a wonderful addition to the classroom. It takes &#8216;What did you do today?&#8217; to a new meaning.&#8221;

The program also is piquing fellow educators&#8217; interest. Magatagan said colleagues often ask her about Palm Pilots and how they work.

Other teachers interested in incorporating technology into their classrooms may get a shot soon. Ballard said the application process for the next phase of the technology project begins in January. The next program will only have one model, though &#8212; one laptop per student.