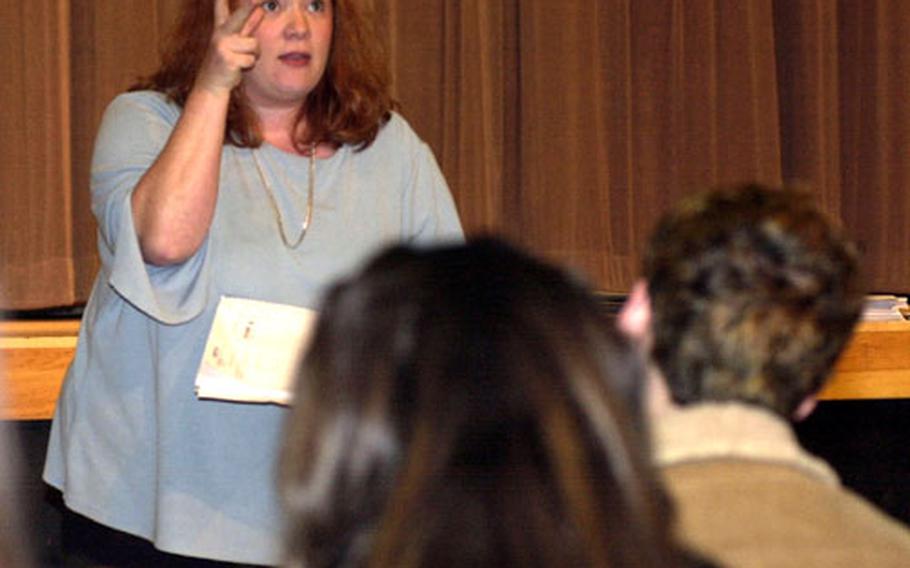 Carol Castleberry, the hearing impaired coordinator for the Pacific, reviews signs with Seoul American High School students Wednesday. It&#39;s the first time sign language has been offered at the high school, opening a window to communicating with the hearing impaired. (Jeremy Kirk / S&S)

A visual language with its own semantics and grammar, American Sign Language&#8217;s silent, fluid motions are its lexicon, translating complicated concepts with a few sweeps of the arms, hands and fingers.

While it takes years to master, Seoul American High School students have started learning ASL during an elective period, the first offered at the school, blessed by principal Keith Henson.

Castleberry&#8217;s students were a bit restless and talkative Wednesday, but hushed when Castleberry commanded attention with her arms, imploring her students to translate her rapid-series motion of letters and words.

That means the &#8220;ready to sign pose," with a right index finger on the left elbow. Beginning signers have a tendency to shake their arms, which in sign language is the equivalent of a shout, so the index finger helps keep the arm in check.

Students practiced the finger spelling &#8212; forming each letter. Signers use a mix of motions and finger spelling to express ideas, with finger spelling constituting the difficult part: it&#8217;s fast, hard to see every letter, and the receiver must rely much on intuition and context to get the full meaning.

Ballantyne took sign language in grade school. He said he always had an interest in signing and has used it to greet a fellow deaf classmate.

Usually, a foreign language is defined as one that covers a different culture and has its own syntax, and the deaf &#8220;have their own culture,&#8221; Castleberry said.

Castleberry, who is the hearing impaired coordinator for the Korea District, majored in deaf education and has a master&#8217;s degree in gifted education. She consults with teachers around the Pacific if a child appears to have a hearing problem. Before working at Seoul American High School, she worked for five years with the Mobile, Ala., public school system with special needs children.

The class allows students to learn more about special needs people, and everyone should know a bit of ASL &#8220;to be polite,&#8221; Castleberry said.