DODDS kids find algebra a balance of work and fun 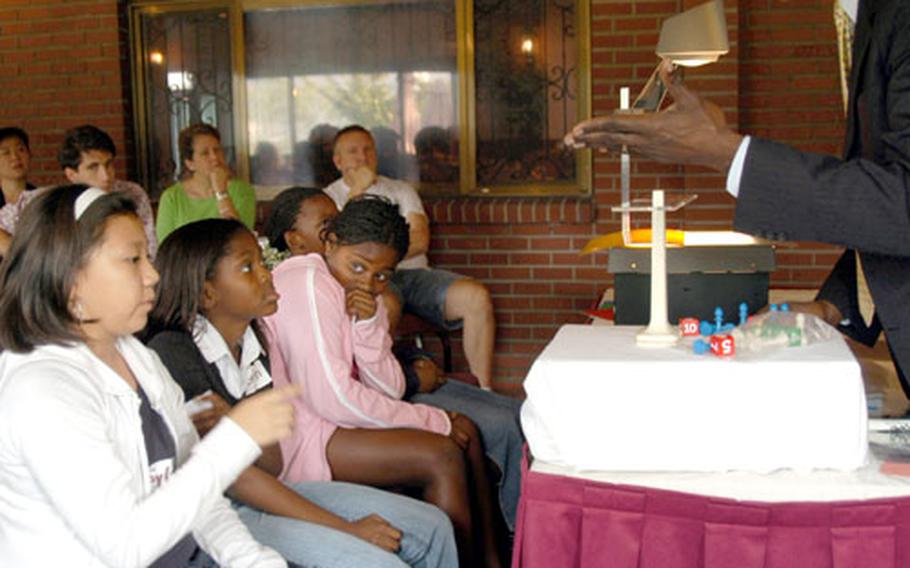 The students, four 10-year-old girls with the experience of playgrounds and one month of fifth-grade classes under their belts, nod in agreement. Of course a seesaw is all about balance.

So goes their introduction to algebra.

In the coming months, third- and fifth-grade students on U.S. military bases in South Korea will be learning more about the basics of algebra, according to Peter Grenier, an assistant superintendent for Korea&#8217;s Department of Defense Dependents Schools.

Last year, the Korea district began introducing algebra &#8212; mathematics that uses letters or symbols to represent values &#8212; to fourth graders. This year the program is expanding in an effort to better prepare the students for middle school, Grenier said. The program also aims to develop among children an affinity for math and the confidence that the younger kids can do just as well as the older ones, he said.

&#8220;We want to make sure kids are successful so when it comes time for the next level, they will become higher achievers,&#8221; Grenier said.

Ezell Long has been in South Korea this week teaching both students and fellow teachers about a method called &#8220;hands-on equations.&#8221; Long, who works for DODDS in Germany, also was to meet with parents at 4 p.m. Friday in the Seoul American Elementary School cafeteria.

On Wednesday, Long gave a daylong seminar for fifth-grade teachers on Yongsan. He started the day by showing how the teaching method works. He turned to fifth-graders Sylvia Darbison, Aerian Irvin, Chelsey Emery and Tatiana Wynder for help.

Long teaches algebra by introducing the image of a seesaw, then bringing it to life by placing dice and chess pawns on either side. Rather than worrying about weight, he helps the kids see that balance is about making sure the same value should be on either side of the plank.

For instance, if a cube on one side of the seesaw shows 6, and the cube on the other side shows 2 plus a pawn, the students quickly deduce that the pawn must equal 4.

As the lesson goes on, the students practice keeping the balance using the dice and pawns while understanding that the value of the pawns can change to make the seesaw stay even.

Then Long drops the bomb. The pawn is actually X, and the girls are doing algebra. He shows them a formula that says 4x + 2 equals 3x + 9.

As the students slowly remove equal amounts of pawns from both sides, they simplify the formula to x + 2 = 9. Aerian explains she subtracted 2 from 9, and discovered the answer to x is 7.