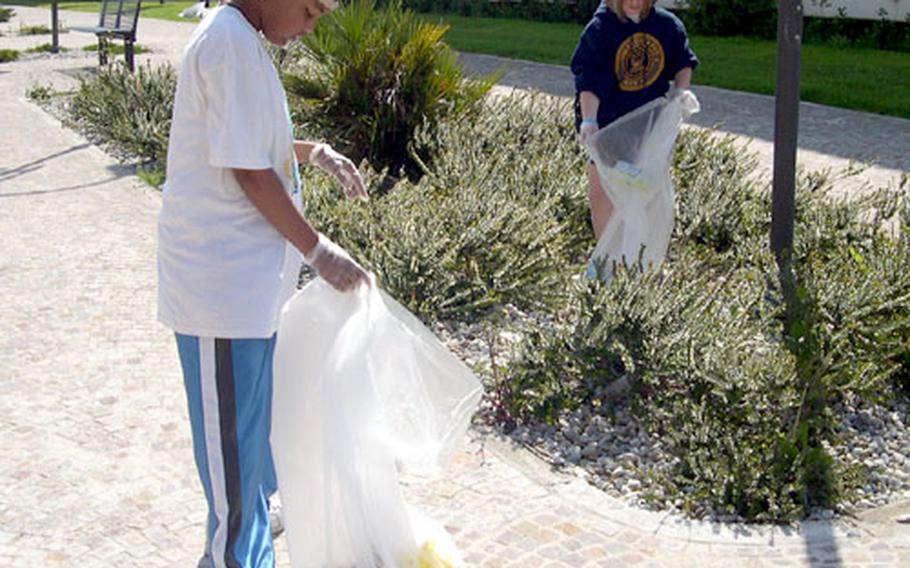 Classmates Kendall Olinger, right, and Channda Mitchell walk along one of the walkways leading between the apartment buildings at the Naval Support Activity Naples, Italy, Gricignano housing area. The small, green shrubs caught lots of trash, and the girls spent much of the late morning bent over picking it up during the base&#39;s annual Earth Day commemoration. (Jason Chudy / S&S)

NAPLES, Italy &#8212; Naval Support Activity Naples held its largest Earth Day program to date &#8212; so large, in fact, that it&#8217;s impossible to tell just how much money went into promoting the event.

Impossible to tell, that is, because the rulers that were given away were made of recycled plastic and, of all things, shredded U.S. currency. Nearly all of the Naples Earth Day giveaways &#8212; bags, ball caps and T-shirts &#8212; were made with recycled materials.

Earth Day, which celebrated its 35th anniversary on Friday, was started by Sen. Gaylord Nelson, R-Wis. Nelson wanted to start a nationwide day of &#8220;protest&#8221; for the environment. On April 22, 1970, 20 million Americans took part in the first Earth Day activities.

About 200 million people worldwide now celebrate the day, including many on military bases in Europe. Getting people to be more aware of their environment, Myers said, is key to Earth Day.

The Department of Defense Dependents Schools in Europe worked to increase awareness among its pupils. At Sembach Elementary School in Germany, for example, first- and second-graders conducted a scavenger hunt to make the children more aware of nature.

At Naval Station Rota, Spain, the Morale, Welfare and Recreation and Environmental departments helped set up a five-part exhibit focusing on paper and glass recycling. Students held competitions and made arts and crafts from recyclables.

Rota also got a &#8220;once-over&#8221; by residents with a base cleanup and a 5-kilometer run. On Saturday, the base will host an environmental awareness party, complete with environmentally themed prizes.

In Naples, dozens of volunteers fanned out Friday to pick up trash in a basewide cleanup.

Classmates Kendall Olinger, 12, and Channda Mitchell, 11, walked along one of the wide walkways between the apartment buildings. Small, green shrubs had caught lots of trash, and the girls spent much of the late morning bent over picking it up.

But the girls were quickly filling their bags with candy wrappers, cans and miscellaneous bits of plastic and paper after only 20 minutes of trash hunting. Gusts of wind occasionally brought them another piece or two.

The Seabees, it seemed, might have done well sticking around the girls.