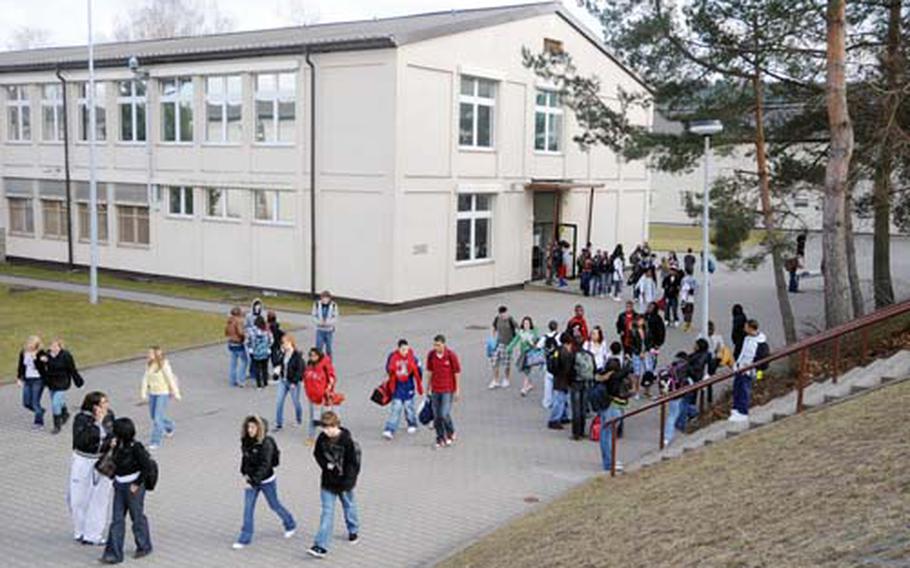 Kaiserslautern High School students mill around after school in March. When the Kaiserslautern Military Community Center opens in Ramstein, the Vogelweh base exchange and adjoining buildings will be torn down to make way for a new DODDS facility. (Michael Abrams / S&S)

Kaiserslautern High School students mill around after school in March. When the Kaiserslautern Military Community Center opens in Ramstein, the Vogelweh base exchange and adjoining buildings will be torn down to make way for a new DODDS facility. (Michael Abrams / S&S) 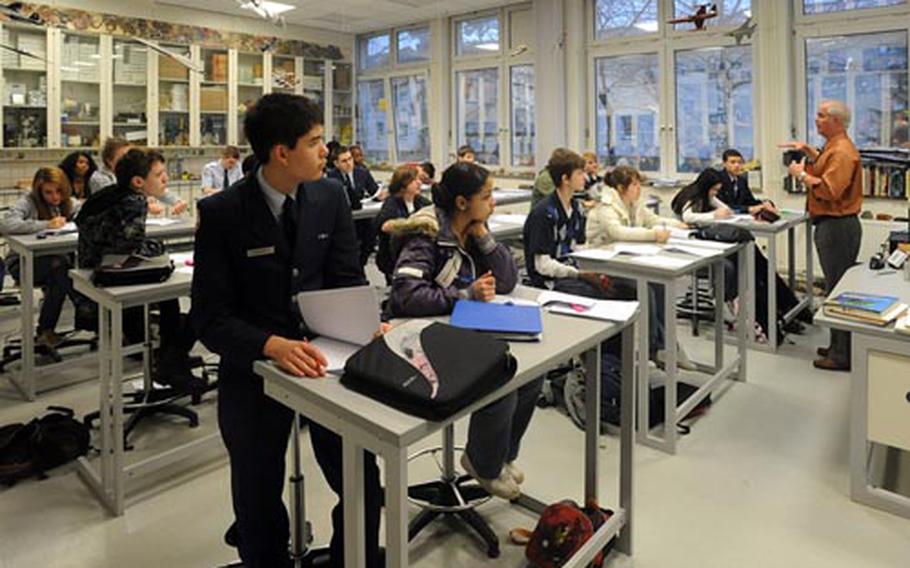 Kaiserslautern High School students listen as their physical science teacher Robert Careless explains how transformers work in March. If approved by Congress, students could be attending a new Kaiserslautern High in the next few years. (Michael Abrams / S&S)

The new high school &#8212; planned for Vogelweh Air Base &#8212; still needs congressional approval as part of the 2010 Department of Defense Education Activity budget, but officials are already planning its design. The current high school, which serves more than 700 students, is "inadequate and undersized," said Jose Tovar, chief of DODDS-Europe facilities.

Built in the early 1950s, the high school now shares property with its nearby elementary and middle schools.

"These are very old facilities," Tovar said Tuesday. "And buildings this old can only be renovated so much."

Budgeted at nearly $75 million, the new school would include state-of-the-art classrooms, a gym with spectator seating, a weight training room, an auditorium, a music suite, computer labs and many other improvements, Tovar said.

The biggest change, he said, would be a new cafeteria. Now, high school students walk to the nearby food court or Burger King for lunch because the lone cafeteria is used by elementary and middle school students.

If the project is funded, the new school would be located south of the existing building. To make way, the base exchange and food court are set to be demolished. Those facilities are to be moved to the new Kaiserslautern Military Community Center on Ramstein Air Base.

Construction on the school could start late in 2010, and it could open to students in 2012 or 2013, according to school documents.

Tovar said designs are already under way for a new sports complex and a bus loading area that would serve buses from all three schools. This phase of construction would start first, just prior to the new school, and it&#8217;s slated to be completed by 2011. It would cost about $20 million, documents show.

"One of the greatest concerns we heard from parents and kids was the lack of a sports complex on this side of town," said Lawanna Mangleburg, superintendent of the Kaiserslautern district. "This was one of the things we wanted to finish first."

The sports complex would house a football stadium and track as well as basketball and tennis courts. It would also include a locker room facility. The site would be ideal to host any of the DODDS-Europe sporting events, Mangleburg said.

For Mangleburg, the new school will be the final puzzle piece in reducing overcrowding at both Kaiserslautern and Ramstein high schools. Once the new facility opens, both schools will have enrollments that do not exceed 850 students, Mangleburg said. There are more than 900 students now at Ramstein.

Residents will have the chance to give their opinions on the new school&#8217;s design before it is built, Tovar said. Still, it hinges on congressional approval.