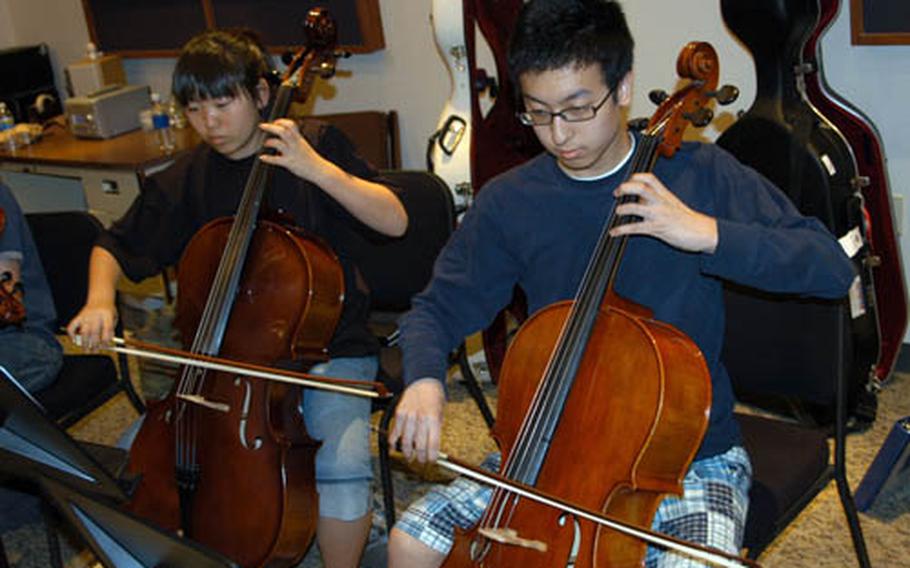 Cello players Yujin Chung, left, and Lucas Jung, both of Seoul American High School, rehearse with the nine-piece string ensemble Wednesday during the Far East Honor Music Festival at Yokota Air Base, Japan. The group is preparing for a concert finale on Friday. (Vince Little / S&S) 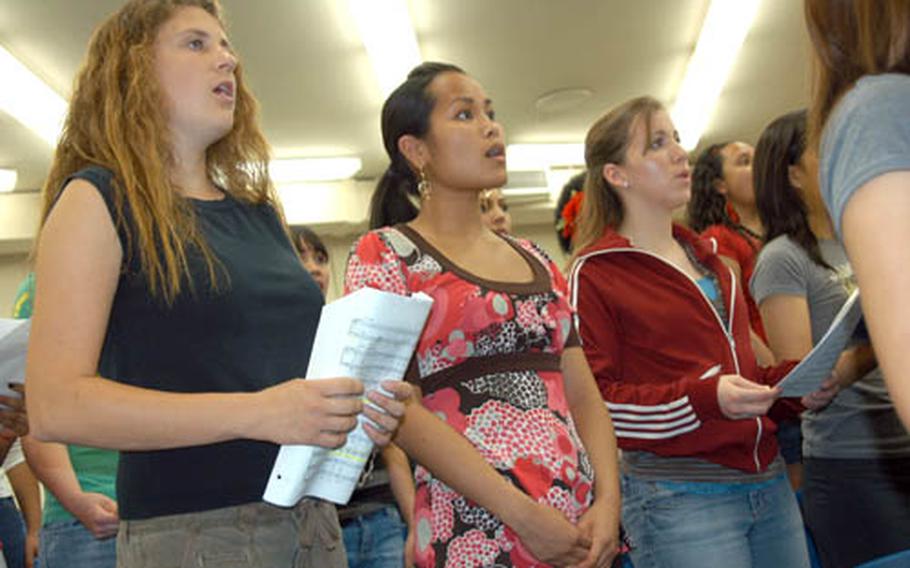 From left, Vanessa Ellis and Lisa Miyagi, both of Kubasaki High School, and Zama American&#39;s Madelyn Boatright rehearse with the Far East Honor Music Festival choir Wednesday at Yokota Air Base, Japan. The 80-member group is preparing for a concert finale on Friday. (Vince Little / S&S) Kadena High School&#39;s Clark Knowles, a drummer with the 17-member jazz band, practices Wednesday during the Far East Honor Music Festival at Yokota Air Base, Japan. The outfit was scheduled to play a special one-hour gig Thursday(April 24) and appear again the following evening at a concert finale in the Taiyo Recreation Center. (Vince Little / S&S) 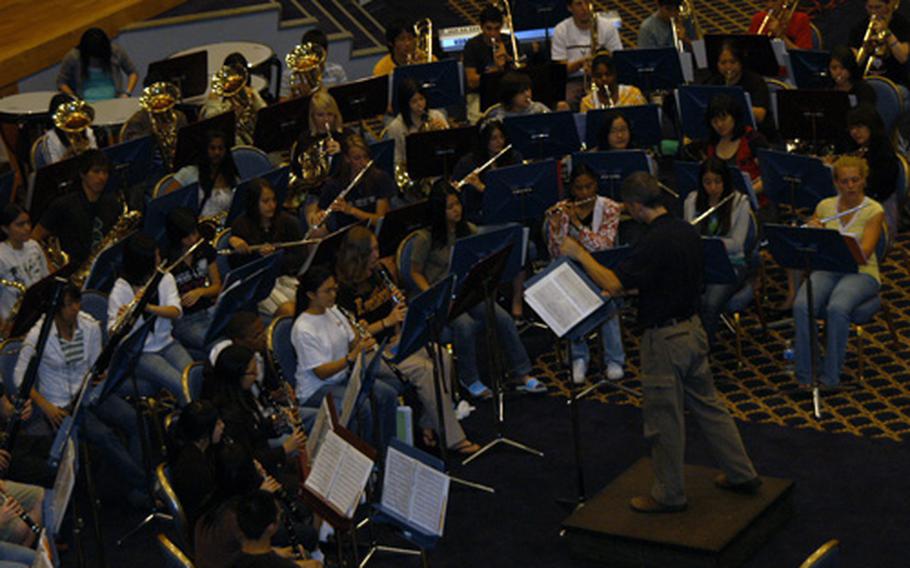 YOKOTA AIR BASE, Japan - Now this is how you strut your stuff.

The festival is scheduled to end Friday with a two-hour public concert at the Taiyo Recreation Center.

Kubasaki High School on Okinawa hosted the past two festivals. It&#8217;s back at Yokota for the first time since 2005.

To get here, students had to go through a rigorous audition process carried out online. They submitted MP3 recordings via e-mail, and selections were made by a judging panel that consisted of independent teachers, band and choir directors, and music coordinators.

Mark Bruschuk, the Yokota band director and festival coordinator, said 160 students applied for concert band while another 160 auditioned for the choir. Only half were chosen.

Seventeen of 50 were picked for the jazz band, he added, while 15 tried out for the festival&#8217;s nine-piece string group.

&#8220;Watching the kids interact is our favorite part as teachers and directors. ... Anything we can share with ideas, we all win.&#8221;

The students began rehearsing Monday and attended a barbecue that afternoon at the U.S. Air Force Band of the Pacific&#8211;Asia facility, which offered up rooms this week for preparations by the jazz and string outfits.

The jazz band was slated to play a special one-hour show Thursday in the Taiyo beginning at 6 p.m.

Meanwhile, the choir rehearsed at Yokota High School while the concert band took the Taiyo as its place to practice.

Most students are staying at Kanto Lodge on Yokota. In between rehearsals, trips to the food court and souvenir shopping, they also have evening study time in their rooms to keep up with school assignments.

Bruschuk says many don&#8217;t grasp the magnitude of being selected for the festival until they get here and see the numbers involved.

Seoul American historically sends the largest representation, and this year is no different. The school earned about a third of the slots. Several students are back for a third or fourth time.

It&#8217;s also the first year for stringed instruments such as the violin, cello and viola. All nine performers are from South Korea, and all except one attend Seoul American.

Senior Esther Kim, 18, who plays violin, is among them.

Seoul American senior Ariella Wright, 18, is at Far East for a fourth year, but it&#8217;s the only time she&#8217;s made first chair in the French horn section.

Logan Shrader, 18, a senior at Kubasaki, took an entirely different path in picking up a bass vocalist spot in the Far East choir. He was among a group of players recruited for singing duty by assistant football coach and choir director Ronald Geist after a practice last fall.