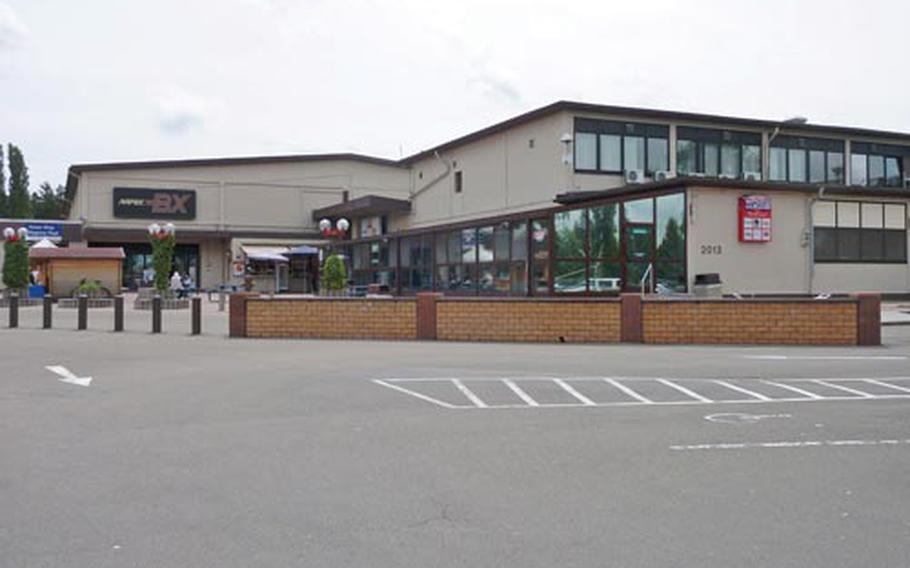 When the Kaiserslautern Military Community Center opens at Ramstein Air Base, the Vogelweh base exchange and food court and the BXtra next door will be torn down. Defense Department schools officials have proposed to build a new Kaiserslautern High School on the BX property, if funding is approved. The BX, BXtra and food court are expected to stay open through Sept. 14. (Michael Abrams / S&S)

Defense Department schools officials are planning to build a new facility to replace Kaiserslautern High School on the Air Force base at Vogelweh, Germany, providing Congress approves its 2010 budget request.

The new school would be built on property now housing the base exchange and food court, which are relocating to the new Kaiserslautern Military Community Center on Ramstein Air Base later this year, according to documents provided to Stars and Stripes.

Kaiserslautern High School now serves 700 students and shares property with Kaiserslautern elementary and middle schools. If the project is funded, the new school would be located south of the existing building. To make way, the BX and food court are set to be demolished.

Funding for the new school is part of the overall DODDS 2010 budget request, and has not been approved, Department of Defense Dependents Schools-Europe spokeswoman Maggie Menzies said Tuesday. Menzies was unable to provide further details on the project this week.

The Vogelweh BX, food court and several other Army and Air Force Exchange Service businesses on Vogelweh are set to move to the new KMCC. The 844,000-square-foot KMCC is meant to consolidate many AAFES and Air Force services facilities, including movie theaters, hotels and restaurants.

The KMCC is set to open in phases starting on July 2, beginning with Ramstein Tickets and Tours, Outdoor Recreation, the Macaroni Grill, the shoppette and a bakery, said Aaron Schoenfeld, a Ramstein spokesman.

Several opening dates in mid-August and mid-September have been projected for other KMCC shops. Redundant facilities at Vogelweh and Ramstein will then be closed.

Opening of the other KMCC facilities "depends on the ability to order merchandise, stock it, have staffs fully hired and employees trained," Schoenfeld said. "A lot of attention is being paid to customer service and making sure there are no major gaps in what is being offered."

For years, the KMCC project has been beset by delays resulting from construction problems, vandalism and difficulties managing an array of contractors. A leaky roof had to be torn out and replaced, there were cracks in the floor and the kitchen ducts were flammable. Construction started in 2003 and Air Force officials estimate the cost now around $170 million.

To offset the closing of the Vogelweh exchange, tentatively scheduled for September, AAFES will "beef up" inventory at the shoppette to keep residents from constantly making the drive to Ramstein, Schoenfeld said.

"Not everything is being taken away from Vogelweh," he said. "Things are just being consolidated at the KMCC."

If hiring goes well, some of the shops at the KMCC could open earlier than the projected target dates, Schoenfeld said. People interested in working there can find links about jobs at both the AAFES and 435th Services Web sites.

"The sooner they get people hired and trained," he said, "the sooner things should be able to come on line."

Aug. 14: Last day of operation for the following facilities, which will reopen in the KMCC: