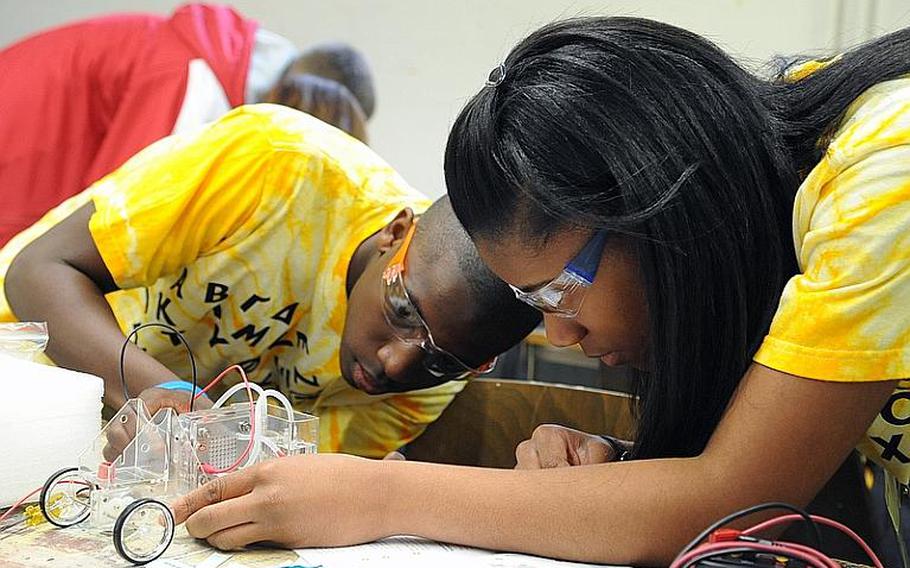 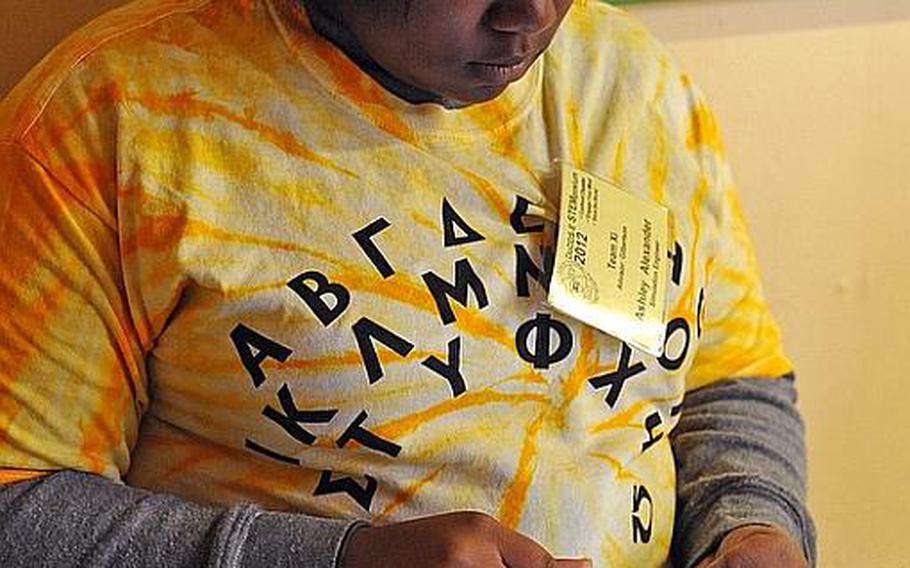 Buy Photo
Ashley Alexander of Incirlik, Turkey, and a simulation engineer at STEMposium, sketches the model for a dam as her group discusses what will be needed to reconstruct the one destroyed by flooding. (Michael Abrams/Stars and Stripes) 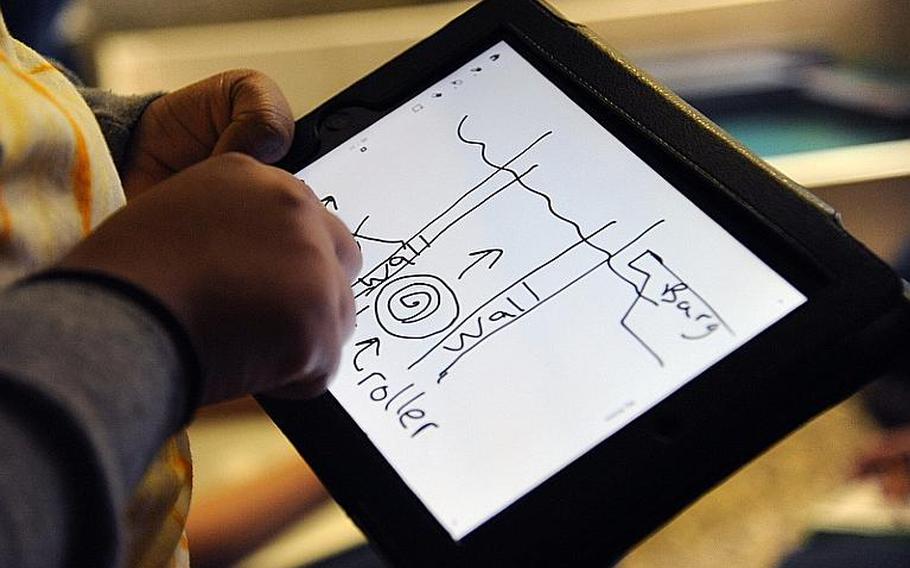 Buy Photo
Ashley Alexander of Incirlik, Turkey, and a simulation engineer at STEMposium, sketches the model for a dam during a scenario in which a dam was destroyed by flooding. (Michael Abrams/Stars and Stripes) 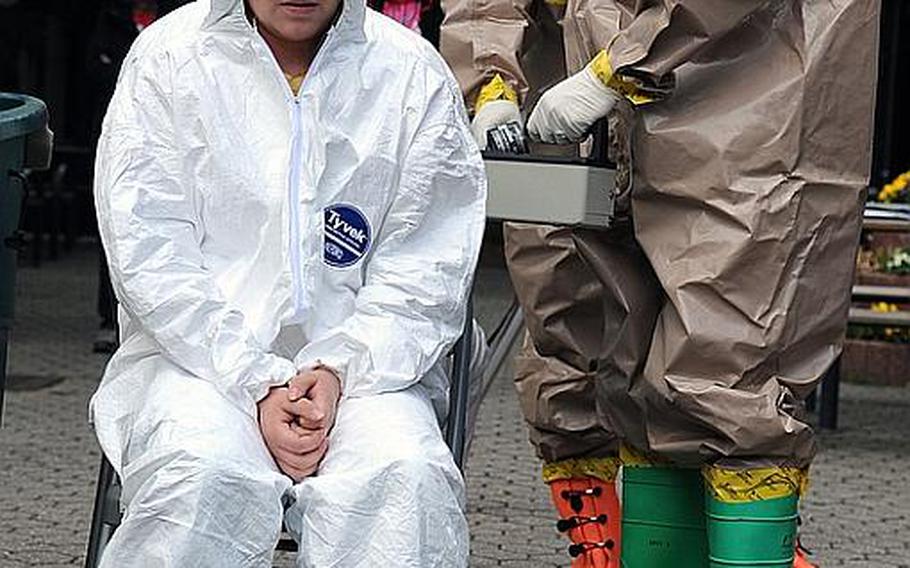 Buy Photo
Lauren Powell, a Hohenfels, Germany, junior, is scanned for radiation by a member of a hazmet team from Ramstein Air Base during the DODDS-Europe STEMposium on Tuesday. (Michael Abrams/Stars and Stripes) 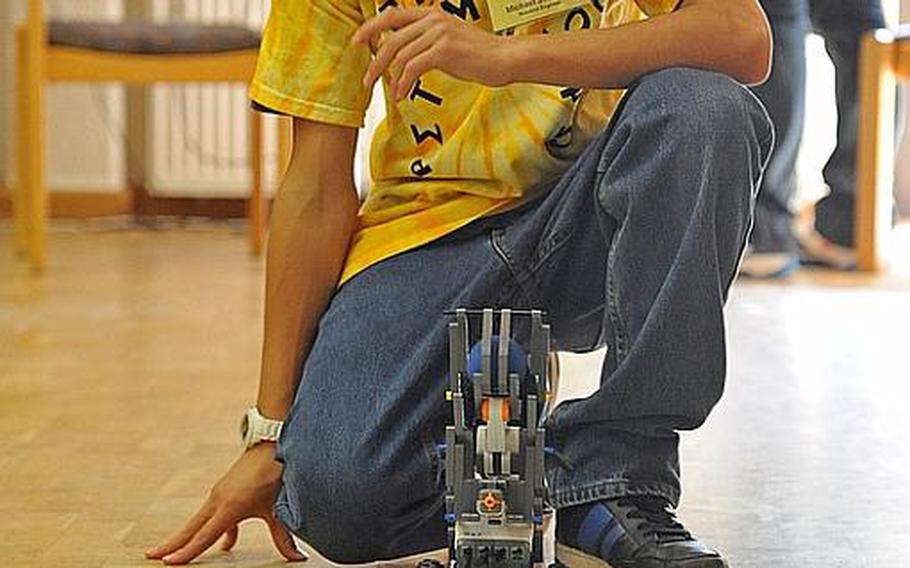 Buy Photo
Robotics engineer Michael Jimenez, a Baumholder, Germany, freshman, tests his robot at STEMposium. The robot had to follow the winding black line and then drop a ball in the cup (in foreground). A full-scale version of the robot could be used for disposing dangerous materials, such as nuclear waste. (Michael Abrams/Stars and Stripes) 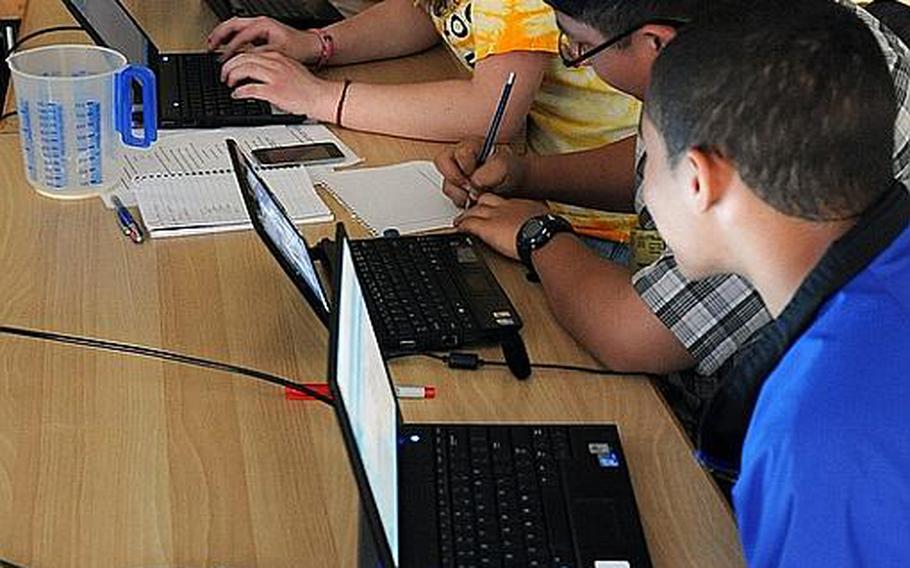 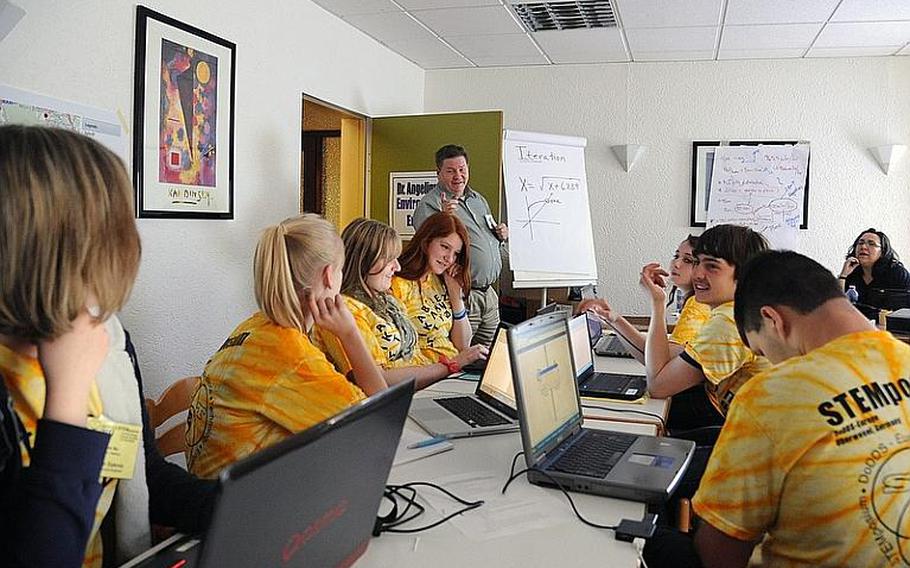 Buy Photo
Bob Panoff, one of the STEM experts at the DODDS-Europe STEMposium, talks to the Environmental Engineering group on how to solve a problem. (Michael Abrams/Stars and Stripes) 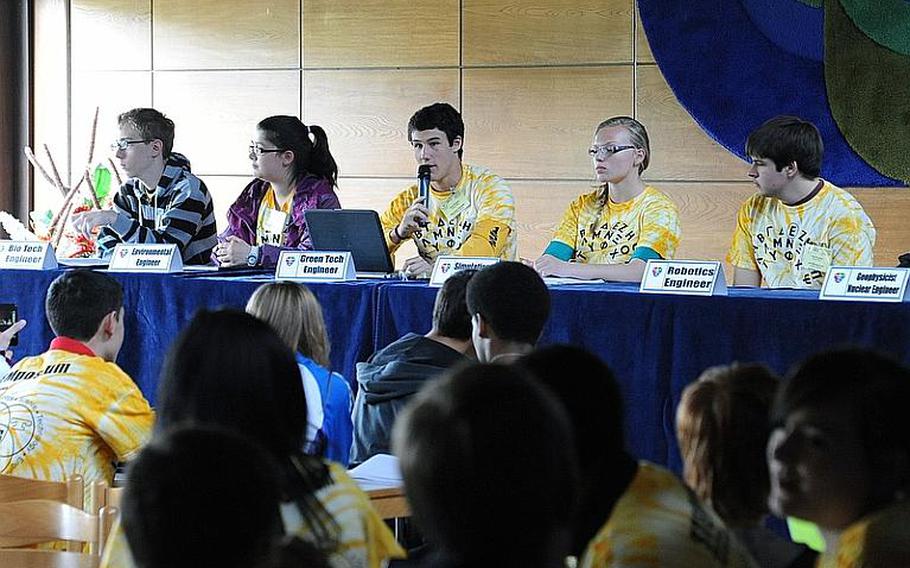 Buy Photo
Members of each of the engineer groups gave mock press conferences daily at STEMposium. (Michael Abrams/Stars and Stripes)

OBERWESEL, Germany &mdash; An earthquake, flooded rivers and a radioactive cloud - disaster of a scale that has stumped governments with vast resources to draw on. This week, 90 high school students put their skills to the test in such a disaster scenario.

&ldquo;Confront Disaster &ndash; Engage Your Mind &ndash; Save the World&rdquo; was the theme of the first DODDS-Europe STEMposium, which ends Friday. The week-long program used a real-world scenario of flooded rivers, an earthquake and a nuclear crisis to challenge the students, in grades 9-11, to solve problems.

Although the scenario was fictional, students conducted cram sessions late into the night trying to stay ahead of the developing situation. Realistic touches, such as lights going out and desks trembling during the mock earthquake, were added. On Tuesday, an Air Force team from Ramstein Air Base, wearing hazmat (hazardous materials) suits, scanned students for &ldquo;exposure&rdquo; after, according to the scenario, winds swept a radioactive cloud over the hostel where the symposium was held.

Federal government engineers and scientists were also on hand to offer insight and give lectures throughout the week. Students took field trips, including a visit to the European Space Agency Operations Centre in Darmstadt, where they learned about space robotics, spacecraft operations and Earth observation.

The symposium follows on the heels of the pilot STEM program, launched by Department of Defense Dependents Schools as part of an initiative by President Barack Obama to spur students to excel in science, technology, engineering and math.

Wiesbaden High School teacher Frank Pendzich, who spent four months developing a realistic scenario for the event, said the participating students typically hadn&rsquo;t been exposed to STEM curriculum. One goal, he said, is to show them the creative aspects of engineering to foster interest in a possible career choice.

During the week, students divided up into six teams of engineering disciplines: bio technical, nuclear, robotics, environmental, green tech and simulations. They also delved into geophysics and computational science.

&ldquo;Hard science is difficult, so you have to make it something they want to do,&rdquo; said Rota freshman Christine Schwarz, who was working on a hydrogen-powered car based on fuel cells with other students in the Green Tech Engineering group.

After working for much of the day in their chosen areas, the students formed six-member groups to use their combined knowledge to deal with the scenario&rsquo;s escalating crisis.

Teams staged mock press conferences daily to update the press corps, played by teachers, on the latest developments, and what they were doing to contain the disaster and evacuate residents.

Teachers served as mentors, offering guidance instead of instructions, as students worked to solve various challenges the scenario created throughout the week.

&ldquo;They don&rsquo;t baby us, they make us feel like we can do it on our own,&rdquo; said Bamberg junior Brittany Arenivas.

What the mentors described as &ldquo;gracious professionalism&rdquo; was on display as the budding engineers were quick to offer a hand or make suggestions to others.

Pendzich thinks not just the students, but also the teachers, benefit from STEMposium.

&ldquo;My hopes are that they&rsquo;ll walk away with more tools in their toolbox to help reach a lot of these kids that have difficulties in mastering science, technology, engineering and math,&rdquo; he said.