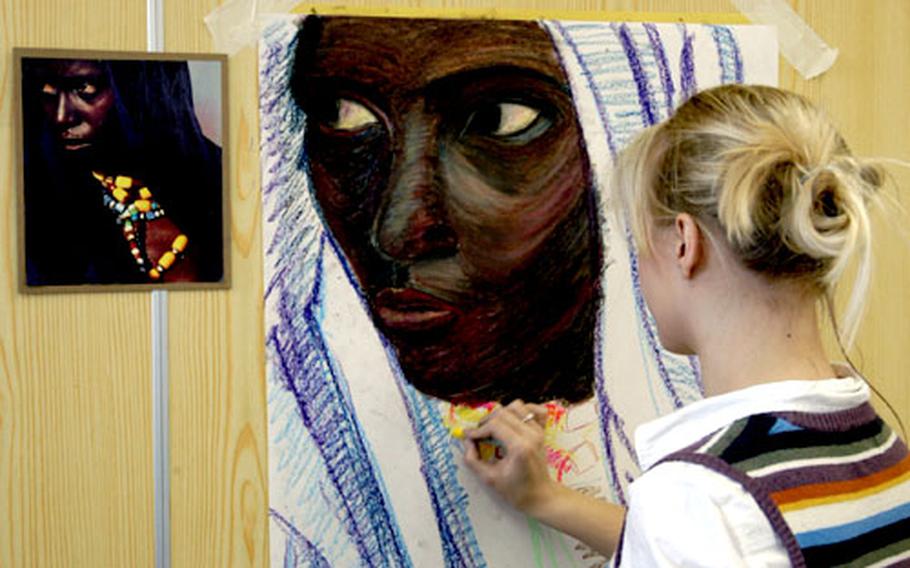 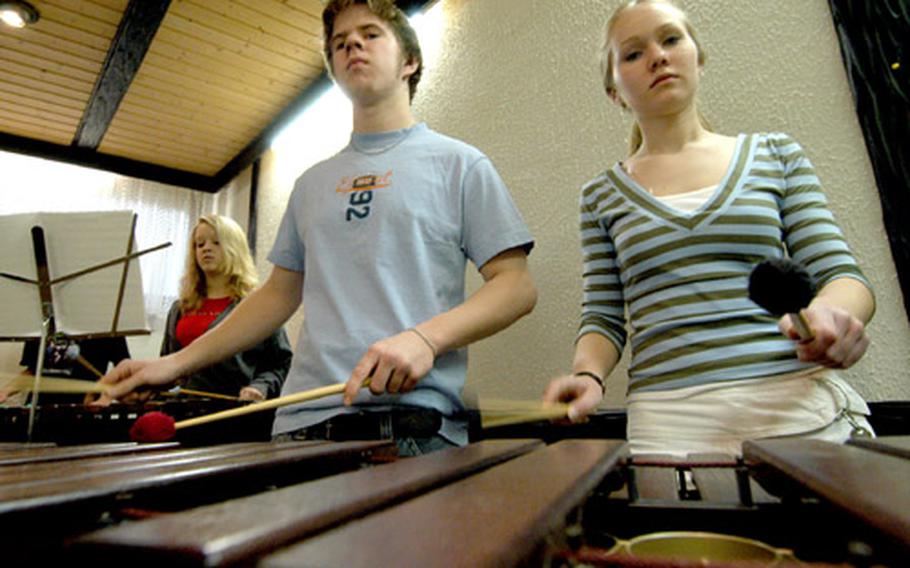 Andrew Stark from Brussels, left, and Sarah Ashby from Lajes play the marimba in the Beyond Hum-Drum workshop Tuesday. (Michael Abrams / S&S) 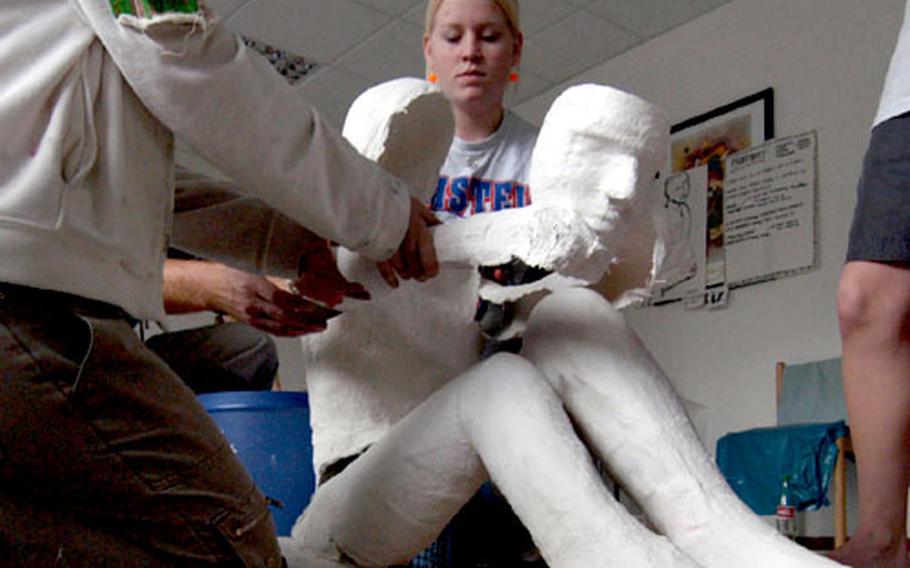 Krystiana Hoehn, a 10th-grader from Ramstein, puts together a plaster cast sculpture at a workshop Tuesday at Creative Connections. (Michael Abrams / S&S) 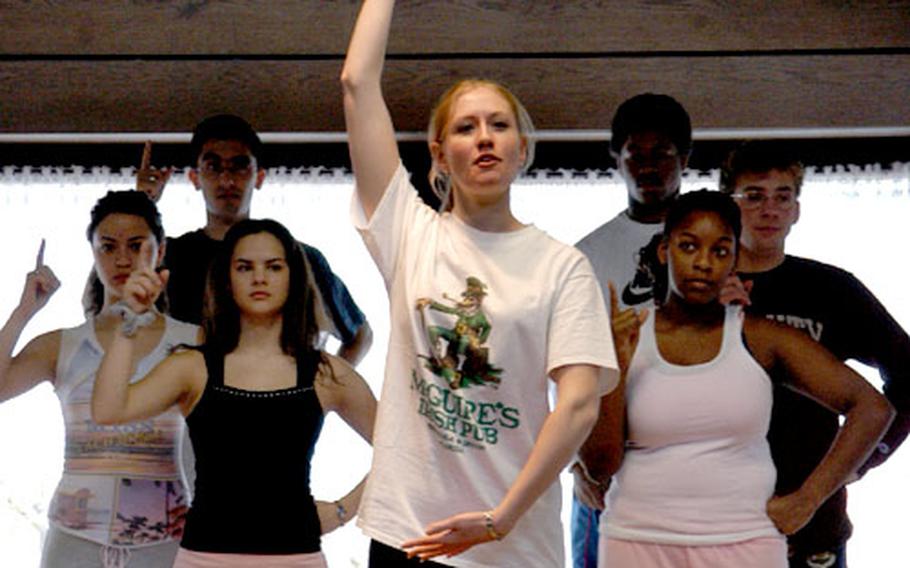 Bethany Hacker, center, a senior at Vicenza, Italy, and other members of the "Way off Broadway" workshop, work through a number from "Fame" Tuesday at Creative Connections. (Michael Abrams / S&S) 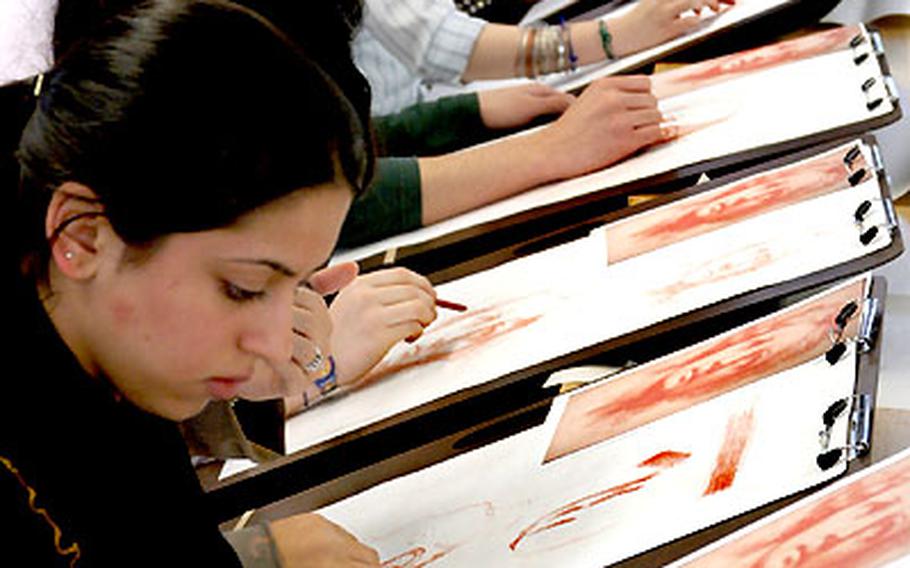 Members of the "Multi-dimensional Drawing" workshop practice their art during a session Tuesday at Creative Connections. (Michael Abrams / S&S)

OBERWESEL AM RHEIN, Germany &#8212; They might look like ordinary teens &#8212; some dressed in blue jeans with dyed hair, others in off-the-shoulder blouses and funky pants &#8212; but there&#8217;s something different about them.

The 149 students from Department of Defense Dependents Schools-Europe are filled with a passion for music, theater and art that is not always seen in teens. During a weeklong workshop called Creative Connections, they are getting their fingers dirty, bodies moving and voices heard through creative and performing arts training.

The workshop, held in a mountaintop youth hostel, is offering 10 classes, five in performing arts and five in visual arts. Those sessions will eventually either push students in an artistic direction never before used or hone skills to take them to the next level, according to Joe Bockman, the performing arts director from Naples, Italy.

The most fitting workshop just might be the Way-Off Broadway musical &#8220;Fame,&#8221; where on stage students vie for creative and performing arts positions in New York City&#8217;s elite High School for the Performing Arts.

As in &#8220;Fame,&#8221; the students of Creative Connections are the cream of the crop. The program draws on a select group of students. All must first apply at their local high school with a recommendation from a teacher. The schools rate their students and send the applications to the main DODDS office, where the final selections are made.

Students said that the widespread passion for the arts at the workshop helps them grow creatively.

Liz Eastman, 15, of Alconbury, England, said though she knew what to expect coming in, she didn&#8217;t know so much of her own emotion would go into the work.

&#8220;This isn&#8217;t something where the teacher makes assignments for you or tells you what to do. We are the ones really involved and making this work,&#8221; said Eastman, who is dancing in &#8220;The Seven Deadly Sins&#8221; in the Creative Choreography workshop.

She and her dance partner, Jessica McBride, 18, of Rota, Spain, are portraying Lust.

&#8220;We have to dance with all of our emotions to show what lust would be and then all of a sudden we have to dance in a completely different style when we&#8217;re not portraying lust,&#8221; she said.

Workshop instructors are also an elite group, according to Bockman. Eight of the 10 workshops are instructed by top DODDS teachers, while the other two, the multidimensional and spherical thinking drawers, are taught by contracted professionals.

&#8220;I was never really able to draw people. I never actually took a class. This has made me realize drawing is about technique. With it, I can do anything.&#8221;