DODDS-Europe students head back to the books 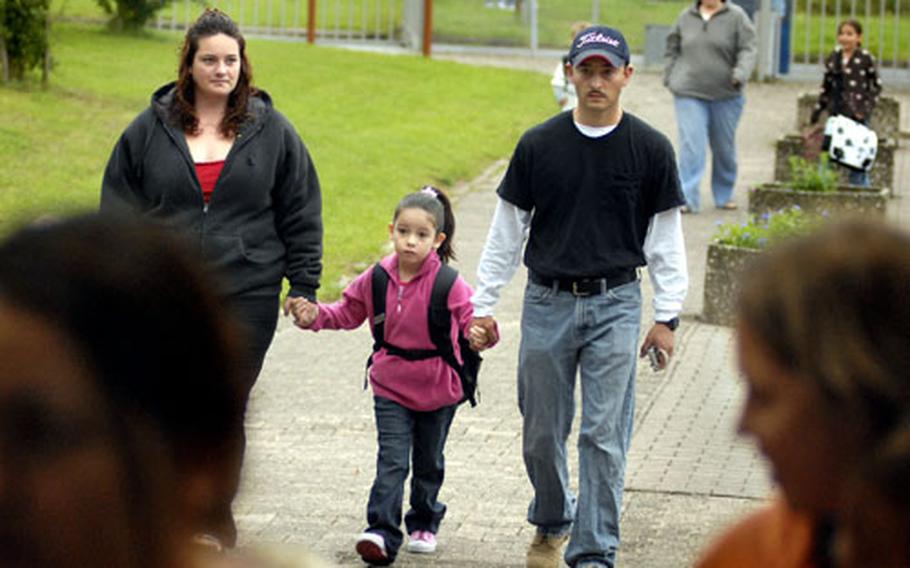 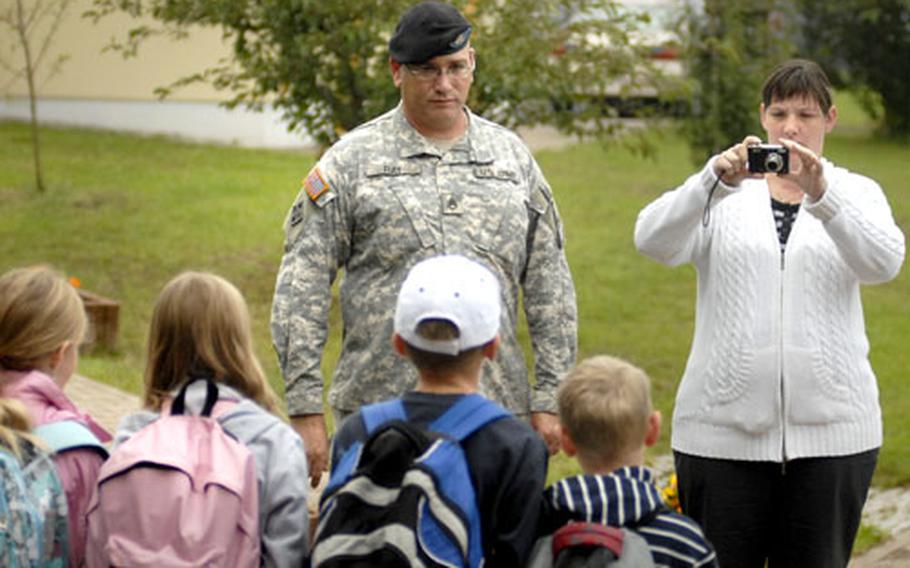 Eugene McCloud and his son, Dumas, walk to school for the first day of the term at Naples Elementary School. (Lisa M. Novak / S&S) Like flocks of migrating birds, school buses returned to their military base perches Monday across Europe.

One after another, 37 vehicles of varying sizes, shapes and colors passed onto Aviano Air Base in Italy and disgorged their passengers: hundreds of students attending the first day of the 2008-2009 school year in the Department of Defense Dependents Schools system.

"This is a big undertaking right here," said Donald Woolson, the new assistant principal at the high school, marveling at groups of students passing by in relatively good order. "Fortunately, we have people who know how it works."

There were plenty of adults on hand to help students safely reach their classrooms. It was pretty much the case all around Europe, with more than 30,000 students returning to school after their summer break.

"It should be fun," said 9-year-old Dumas McCloud, as he walked to school with his father, Eugene McCloud, for his first day in third grade in Naples, Italy.

Smiles were in abundance at Lakenheath High School in England. The first day back had gone great, principal Kent Worford said Monday afternoon, with students assembling in the morning to get the low-down on rules, expectations and the like.

Students spent the rest of the day on an abbreviated schedule and meeting teachers, Worford said.

School enrollments are largely the same as last year, but some have grown.

With an enrollment of just more than 430, Bamberg American Middle/High School in Germany is up 150 students from last year as children from Schweinfurt join the student body.

Many of the students coming from Schweinfurt used to attend W&#252;rzburg American High, which shut its doors in June.

Principal Dominick Calabria and his staff are working to stymie a "Wolves vs. Barons" atmosphere and create one community.

By putting certain grades together during lunches and giving them common teachers &#8212; creating a "school within a school" &#8212; as Calabria put it, the hope is students will identify with each other.

"It seems to have gone pretty well [so far]," Calabria said.

In Naples, locker assignments, class schedules, school lunch, gym classes and book bags were the topics of discussion most of the morning.

Despite some 900 students showing up at Naples Elementary School, the first day back went fairly smoothly, according to the staff.

"This morning was pretty well-organized," said Michelle Ludwik, a special-education assistant. "We were all out here to greet the kids and help them find their way, so there wasn&#8217;t too much confusion."

A new initiative the schools are using this year is Grade Speed, for grades 4 through 12. It allows parents to access their children&#8217;s grades, assignments and attendance online.

"This is a great way to connect parents as partners in their children&#8217;s education," said Sandy Daniels, Naples High School principal. "It gives the parents the knowledge of what happens at school."

Aviano has just fewer than 1,300 students registered, from kindergarten through 12th grade in a multi-story complex about the size of a city block.

When they all arrive at around the same time, it poses some challenges. Heinz Schlipf, transportation operations specialist for Aviano schools, and several assistants were up to the task Monday, though.