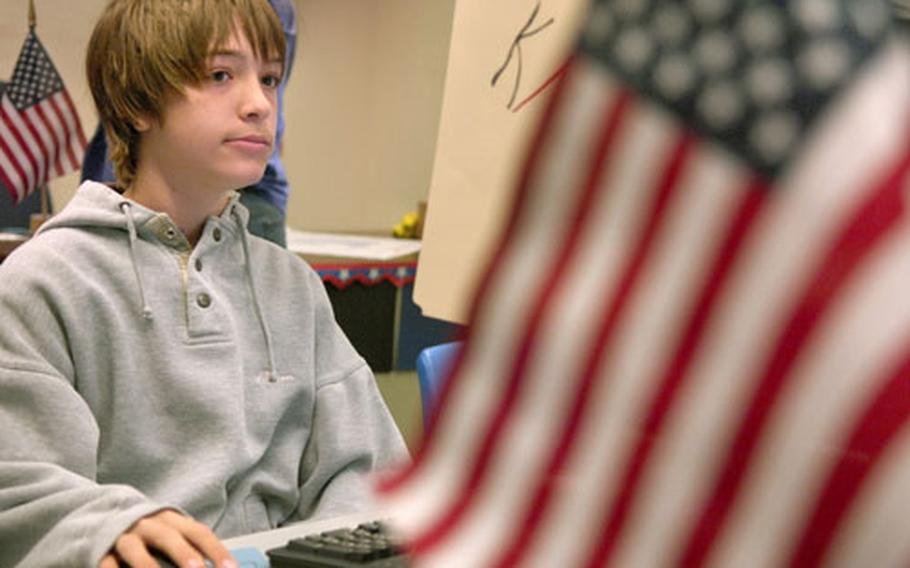 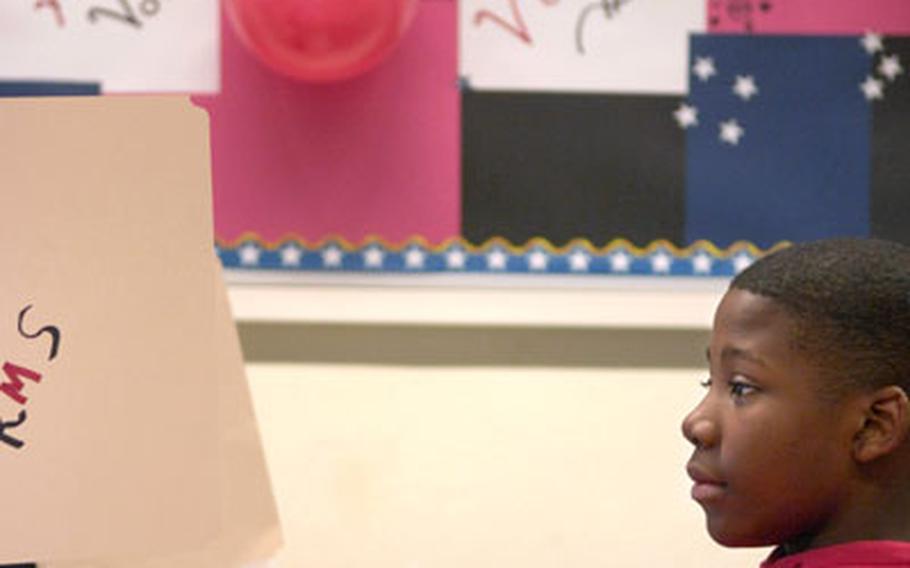 Jamal Derisma, an eighth-grader at Kaiserslautern Middle School in Germany, casts his vote for student administration in the school’s computer lab in Vogelweh. The middle school is the first in Department of Defense Dependents Schools-Europe to record students&#39; votes electronically. (Ben Bloker / S&S) Caleigh Chamlee, an eighth-grader at Kaiserslautern Middle School in Germany, attaches her “I voted” sticker after casting her vote. (Ben Bloker / S&S)

They chose a president, vice president and secretary for the sixth, seventh and eighth grades.

The new voting method wasn&#8217;t used because of voter fraud or butterfly ballots, Howe said, but to teach students about the modern election process.

Zoomerang, a free computer program, allowed the school to create ballots for each grade and sent them to every student&#8217;s school e-mail account. Youngsters reported to the school computer lab to access their e-mail and send their votes. The Zoomerang program then tallied up the results.

&#8220;I think it&#8217;s really exciting to use tools that are part of these students&#8217; lives,&#8221; said Joy Murphy, the school educational technologist who helped run the electronic program.

All of the school&#8217;s 438 students had the opportunity to vote, Howe said, and voting wasn&#8217;t mandatory. Even if students were sick at home they could still vote from personal computers.

According to the school, 414 students voted, including 131 sixth-graders, 132 seventh-graders, and 151 eighth-graders.

The ballots allowed students to pick from the given candidates or use a write-in option.

The candidates spoke to students and gave their positions during the days leading up to the election. The eighth-grade journalism class produced Election Day newspapers to help voters learn more about the candidates.

Campaign posters were hung around the school encouraging students to vote. In the end, students did learn their votes counted as the winning eighth-grade president won by one vote. The winners were announced at the end of the school day and were jumping with excitement through the main office, Howe said.