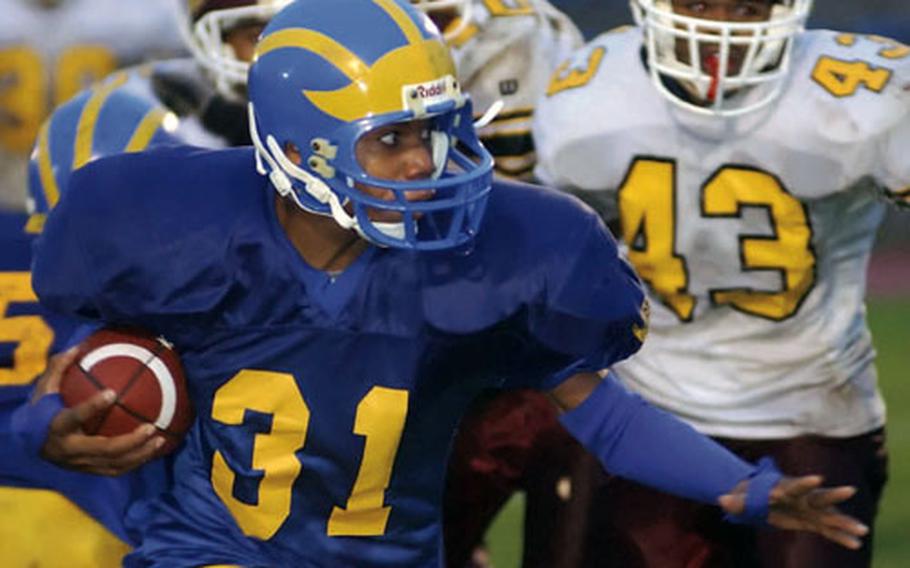 BAUMHOLDER, Germany &#8212; It started out in 2003 almost as an experiment, with major reservations and minor expectations.

Two years later, the Super Six football championship is the premiere athletic event for U.S. military schools in Europe &#8212; an event more than a few people would like to steal away because, in part, Baumholder makes it look so easy.

What was originally conceived of as a risky proposition has turned into a consistent draw and a revenue producer for Baumholder. If the teams are good and Baumholder&#8217;s notorious weather even marginal, at least 3,000 people are expected to descend on Minnick Field for this year&#8217;s event on Nov. 5.

It looks like easy money, but it&#8217;s not. Putting one of the largest, if not the largest, Department of Defense Dependent Schools events in Europe means sorting through endless details, from having enough footballs on hand to making sure different food booths don&#8217;t all have the same food, said Winfree, now the post&#8217;s special projects officer.

In mid-October, Winfree was walking around with a 42-line must-do list for at least 100 people working in eight agencies from the Department of Public Works to the base clinic.

An event is enjoyable because the most mundane &#8212; but absolutely critical &#8212; items get crossed off, or no one goes away singing Baumholder&#8217;s praises, he said. For example, if you host thousands of people, you not only need extra port-o-potties, you need contractors cleaning them the entire day, Winfree said.

Like if it&#8217;s Baumholder in November, it&#8217;s probably going to rain. Sixty muddy football players crowding into the Hall of Champions gym next to the field is not the way to go. So organizers decided to erect two large tents, complete with lighting and portable toilets, at each end of the field to give teams half-time &#8220;locker rooms&#8221; they can&#8217;t mess up, Winfree said.

And just because games end doesn&#8217;t mean people will leave.

Despite the extra work, expecting a few thousand for the Super Six is a good problem to have. Initially, the Super Six came about because there were no crowds before, said Ansbach coach George and Karen Seadore, DODDS Europe athletic director. Before Super Six, three division finals were played all over Europe, hosted by the team with the best record, Seadore said. That made it difficult for everyone to see all the games &#8212; Division I, Division II and Division III &#8212; including her, football fans and college recruiters, she said.

&#8220;We just agreed [Baumholder] was the right place, especially because of the unique field,&#8221; designed and built by DPW head Bob Baumgardt, said Dom Calabria, Baumholder High School principal at the time.

With lighting for night play, ample seating and the only bowl-type field in Europe, Baumholder got the nod, but not without some trepidation. All other major sports had tournaments, &#8220;but we were asking ourselves, &#8216;Is this what we really want to do? Just because this is the way we do it for the other sports doesn&#8217;t mean we have to do it for football,&#8217;&#8221; Seadore said.

In the end, the Super Six has flourished because the community came through, said Calabria and Winfree. &#8220;If you don&#8217;t have the command sergeant major, the commander, the general and the deputy commander all support it, you&#8217;re in big trouble,&#8221; Winfree said.

Other communities have mentioned hosting the Super Six, but as long as Baumholder has that community support, it&#8217;ll stay where it is, Seadore said.

Could the Super Six be bigger? Probably. George believes that holding the Super Six at Ramstein, with its larger American military community, might push attendance up to about 10,000. But because Baumholder has proven itself, he doesn&#8217;t see that as sufficient reason to move.