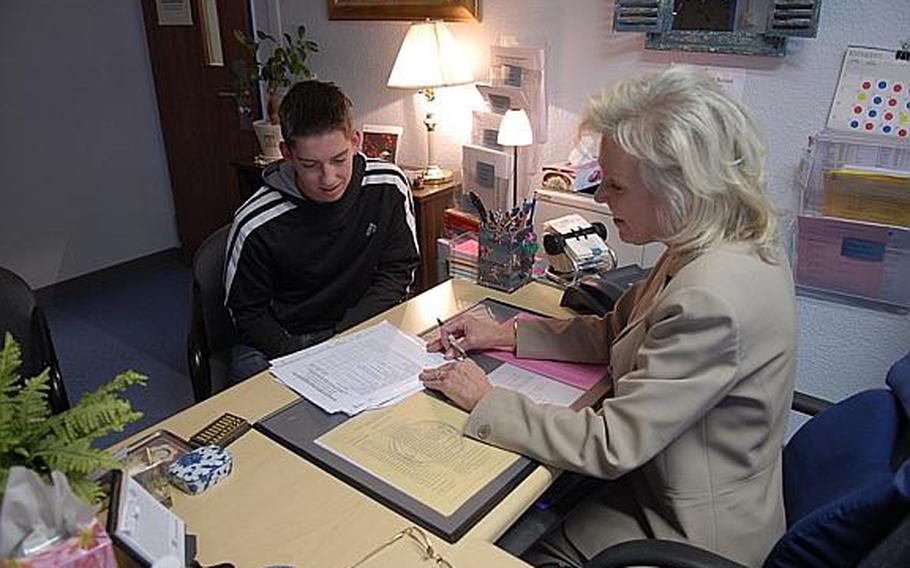 Buy Photo
Patty Carden, a guidance counselor at Ramstein High School in Germany, and senior Josh Wallworth discuss his transcript and his hopes to attend either Auburn University or the U.S. Air Force Academy. Department of Defense schools in Europe and the Pacific have stepped up training on transcript management after a review revealed numerous errors in students' records. (Jennifer H. Svan/Stars and Stripes)

KAISERSLAUTERN, Germany &mdash; A review of thousands of student transcripts at Defense Department schools has revealed numerous errors, underscoring an urgent need to improve the school system&rsquo;s academic record-keeping practices and training for employees who handle the documents.

Teams of administrators, curriculum specialists and data analysts looked at all junior and senior transcripts at Department of Defense Education Activity schools for the 2011-2012 academic school year.

The unprecedented review was prompted by a 2010 investigation at Ansbach Middle/High School in Germany that uncovered widespread problems with the management of student transcripts. The investigation was ordered after the discovery of incorrectly recorded grades on the transcript of a student who had recently transferred from Ansbach to another school.

In Europe&rsquo;s 27 high schools, where about 3,480 transcripts were reviewed &ldquo;line-by-line,&rdquo; &ldquo;as many as 50 percent of the transcripts required some form of updating or correction,&rdquo; Department of Defense Dependents Schools-Europe spokesman Bob Purtiman said in written answers to questions from Stars and Stripes.

Most of the inaccuracies did not affect credit, grades or class standing, and were easily corrected, officials said.

&ldquo;A lot of it was simple administrative error,&rdquo; said Harvey Gerry, DODDS-Europe chief of staff. &ldquo;It could have been a typo, it could have been transposing words; something like that.&rdquo;

All students, however, who were planning to graduate, were able to do so, Hoff said, and no student was required to take an additional course to graduate on time.

Of the remaining transcripts, one-third was error-free, while the remainder had misspellings, incomplete addresses and other minor mistakes, Hoff said.

No school in Europe or the Pacific was found to have the magnitude of errors discovered at Ansbach, where more than 20 seniors who were planning to graduate in 2011 fell short of graduation requirements &mdash; though all eventually did graduate &mdash; and dozens of students over a four-year period were allowed to graduate without meeting graduation requirements and without documentation of a formal waiver.

Those findings also triggered a rotational audit across DODEA that was to start this academic year, with schools instructed to review all high school transcripts &mdash; including freshmen and sophomores &mdash; within a three-year period. That audit will continue to ensure record-keeping expectations are met and to provide oversight and additional support to schools, DODEA spokesman Frank O&rsquo;Gara said in written answers.

&ldquo;Our credibility as a school system mandates that we manage this important process in a deliberate and consistent manner,&rdquo; Fitzgerald wrote. &ldquo;I expect every student transcript to be error free and include only appropriate course credits.&rdquo;

One of the problems that emerged was failure to properly evaluate transcripts of incoming students from non-DODEA schools, including foreign and stateside public schools. Other school systems may use a different grading system, awarding extra points for honors courses, for example, or require different courses or credits for graduation.

Across DODEA, some counselors were interpreting these variations differently and sometimes in ways that were at odds with DODEA policy, officials said. But DODEA&rsquo;s guidance in that area was not always clear, investigators determined during the Ansbach review, and they recommended that DODEA shore up its secondary school academic policies to make them less ambiguous and open to interpretation.

Problems with data entry using DODEA&rsquo;s new computer-based student records system, ASPEN, also were noted during the transcript review, officials said. ASPEN is used to track student records, including attendance, grades and schedules. DODEA officials said they&rsquo;re working to improve the system and, since the Ansbach investigation, have turned on an audit feature that automatically tracks all changes and the personnel who made and authorized the changes.

DODEA may also tighten its requirements for incoming counselors, who currently aren&rsquo;t required to have secondary school experience or secondary school certification to be hired, DODEA officials said.

Even if talking with a pupil about a separate topic, it&rsquo;s typical to say &ldquo;while you&rsquo;re here, let&rsquo;s review your transcript,&rdquo; said Ramstein High School guidance counselor Patty Carden. &ldquo;It&rsquo;s what we do.&rdquo;

&ldquo;Going over a transcript with a kid is just a doorway to so many other things,&rdquo; said Susan Lambert, a guidance counselor at Kaiserslautern High School. Asking &ldquo;why didn&rsquo;t you pass this class?&rdquo; may open a discussion on struggles a student may be having outside of school, she said.

Lambert is responsible for the transcripts of 152 seniors. Carden, the junior class counselor, works with about 230 transcripts, though she and the other Ramstein counselors are assisted by administrative clerks because of the school&rsquo;s large class sizes.

In DODEA, the student-to-counselor ratio at high schools is 200 to 1, &ldquo;which is a bit lower than what it is in the United States,&rdquo; said Catherine Riedel, DODDS-Europe instructional support specialist for student support services and school counseling programs.

Both DODDS-Europe and DODDS-Pacific have stepped up training on transcript management and using ASPEN for counselors, administrators and registrars.

&ldquo;It&rsquo;s not just the counselor who is looking at the transcript,&rdquo; Riedel said. The registrar accepts records and may assist with data entry; and the principal weighs in on interpreting DODEA policy, she said.

No formal, system-wide training was in place before, officials said. Counselors said they learned on the job.

DODDS-Europe is looking at establishing a mentoring program, pairing up more experienced counselors with counselors new to DODEA, Riedel said.

In the Pacific, counselors participated in online training seminars, and a website was created as a source for counselors to refer to, with topics ranging from applicable policies and procedures to sample academic plans and best practices, Hoff said.

Counselors not only have to create schedules and maintain student records, but &ldquo;in the military community, counselors are called on to provide a significant degree of counseling, both academic and social,&rdquo; Gerry, the DODDS-Europe chief of staff, said. &ldquo;I think counselors have done a pretty good job in both areas.&rdquo;