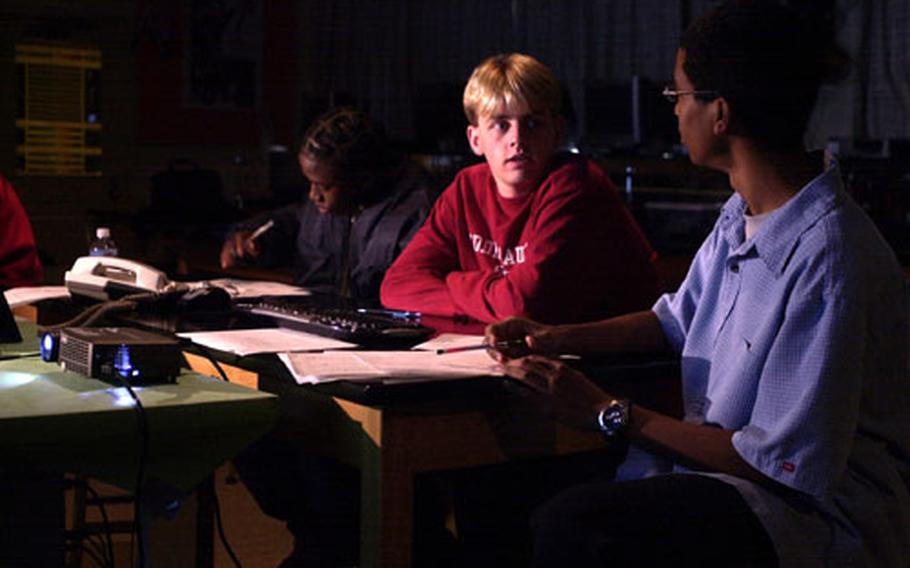 Thaddeus Reap, left, records data while Nicholas Ziegler, center, talks with Phillip Clark during the students&#39; time controlling the Goldstone Apple Valley Radio Telescope in Apple Valley, Calif. The three students are juniors at Kubasaki High School on Okinawa and were the first students to take part in the GAVRT program at the high school. (Fred Zimmerman / S&S)

Michael Klein, from NASA and the Jet Propulsion Laboratory, and David Jauncey, from the Australian Telescope National Facility, are conducting two four-day training sessions at the DODDS-Pacific director&#8217;s office on Torii Station.

&#8220;This is a tremendous program,&#8221; said Kim Day, Department of Defense Education Activity liaison for math and science. &#8220;We are getting ready to implement new science standards and science curriculum in the schools. This is a great way to do real science in the classroom.&#8221;

Some Pacific students already have tried their hands at using the $20 million Goldstone Apple Valley Radio Telescope in Apple Valley, Calif., an instrument once used by NASA for deep space exploration. Students at Kubasaki High School on Okinawa used the Internet last October to control the telescope and scan Uranus for determining the planet&#8217;s deep atmosphere seasonal changes.

Day said all base schools overseas and in the United States will eventually participate in the program. The radio telescope has been dedicated for high school science education through the Lewis Center, she said.

Klein said students using the radio telescope already have made discoveries. One of the most interesting was published in Nature magazine, he said.

&#8220;When the Cassini Spacecraft did a fly-by of Jupiter on its way to Saturn, the students monitored the radiation belt environment of Jupiter,&#8221; Klein said.

The Feb. 28, 2002, issue of Nature said the observations were obtained from November 2000 to March 2001 and &#8220;the GAVRT project also provided an opportunity for students to work with Cassini scientists, conducting ground-based observations and data analysis.&#8221;

Jauncey, the Australian scientist, said the students are not limited to this solar system.