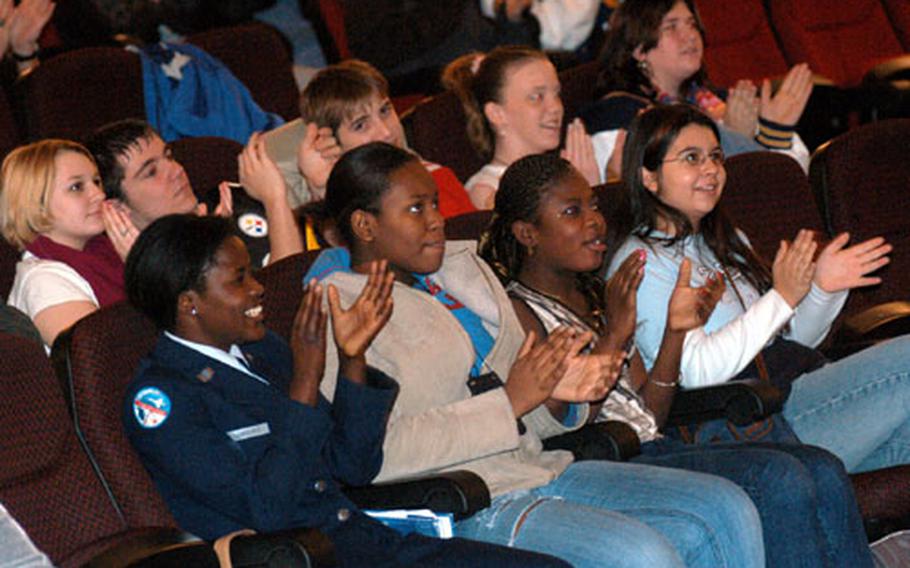 The DODDS Jazz Seminar 2004 big band had an appreciative audience at their concert in Wiesbaden on Thursday. (Michael Abrams / S&S)

The DODDS Jazz Seminar 2004 big band had an appreciative audience at their concert in Wiesbaden on Thursday. (Michael Abrams / S&S) 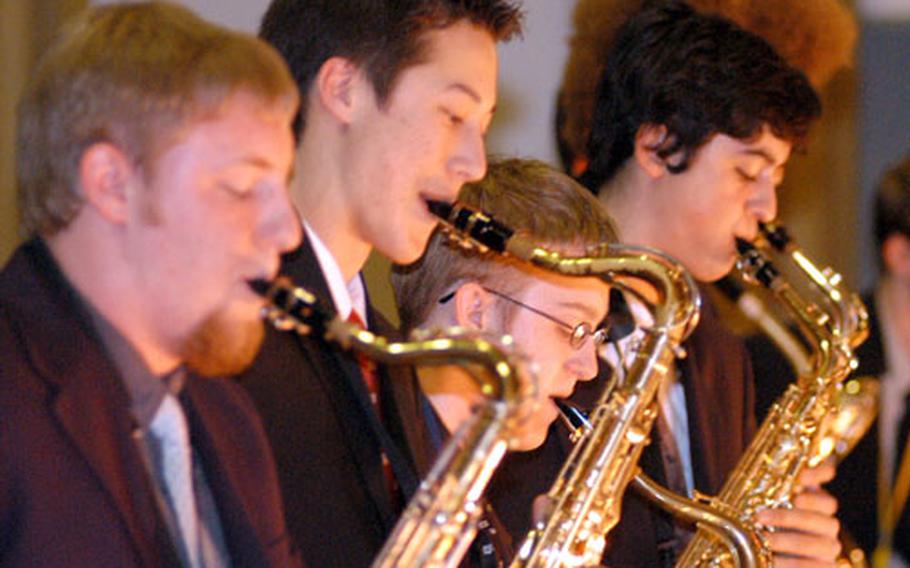 Members of the saxophone section of the DODDS Jazz Seminar 2004 big band blow their horns during a concert in Wiesbaden on Thursday. (Michael Abrams / S&S)

The members of Jazz Seminar 2004 wrapped up their musical crash course on Thursday with a show at the Taunus Theater on Hainerberg Casern. The annual event brought together top musicians from Department of Defense Dependents Schools in Europe, whipped them into shape under the tutelage of jazz master Jiggs Whigham, then turned them loose on a two-day, four-concert tour.

The 28 musicians and singers came mostly from high schools in Germany; a few came from England and Italy. They played jumping jazz, spicy salsa and soulful ballads.

It didn&#8217;t matter that the song was older than her parents.

The players were already talented. That&#8217;s how they got chosen for Jazz Seminar 2004. This was their chance to break away from their school bands and garage bands and swing, baby.

&#8220;The whole time limit made it a challenge,&#8221; said Doug Francis, an 11th-grader from Ramstein High School who played baritone sax.

He was hired to take a group of young people and help the students sound like a band their grandparents used to dance to.

Eight saxophonists sat in the front row, with five trombonists and six trumpeters behind them. Two guitarists, a bassist, keyboardist and drummer filled out the band. The guys looked sharp in their dark suits and ties; the young ladies were elegant in their evening dresses; brass sparkled in the light of the theater.

Some of the players stood, played solos and sat back down. They were cheered by an audience of about 400, mostly students from Wiesbaden.

Outside the theater, the concertgoers were abuzz from the show. Charles McFadden, Rudy Lynch and Demetrius Brown, ninth-graders from H.H. Arnold High School, were excused from class so they could attend.

Yes, it was old-style music, Demetrius said, but it was fresh.

When it was over and as the theater cleared, the musicians broke down the sound system and packed up their instruments. Still wearing their nice clothes, they loaded up the vans and buses.

Like members of any team, band mates have a special bond. It can be the way they talk or the way they know what the other person is going to do. Natalie Eslinger, mother of trombonist Bryan Eslinger, a Ramstein senior, said her son and his friends travel to another zone when they gather with their instruments.

Bryan said it&#8217;s the slicing and chopping and serving it up that brings musicians together. And when they&#8217;re really cooking, it doesn&#8217;t get much better.