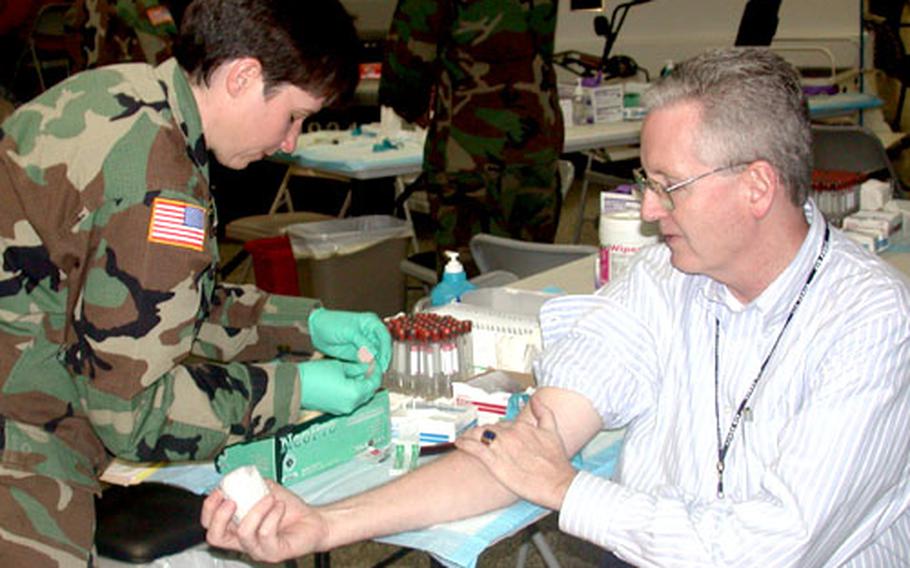 Ken Chapman, a defense analyst for the Air Force who is participating in the flu vaccine study, has blood drawn Tuesday at the Pentagon by Pfc. Denise Leonard, of Passadumkeag, Maine. Leonard is a lab technician at Walter Reed Army Institute of Research in Washington, D.C. (Lisa Burgess / S&S)

ARLINGTON, Va. &#8212; The Pentagon, together with several federal health agencies, is conducting a study to see if a half-dose of flu vaccine is as effective in healthy people as a full dose.

Researchers are hoping that the results duplicate a 2001 study performed at the New York&#8217;s University of Rochester, which showed that the half-dose does work in such populations.

If so, the study &#8220;could potentially it could double the vaccine supply,&#8221; according to Maj. Molly Klote, a physician and research fellow at Allergy-Immunology Department at Walter Reed Army Medical Center.

The study, begun in early November, was prompted by this year&#8217;s vaccine shortage, according to Col. John Grabenstein, deputy director of the Military Vaccine Program in Arlington.

Members of the government&#8217;s National Vaccine Advisory Committee, which includes many military health organizations, recalled that the University of Rochester&#8217;s study of half-doses of flu vaccine administered to more than 1,000 healthy people had offered &#8220;promising&#8221; results, Grabenstein said.

Although the vaccine changes composition each year, the components are not drastically different, Klote said Monday at the Pentagon.

So if half-doses of two different versions of the vaccine proved to provoke the same immune response in healthy people, &#8220;logically, you can infer&#8221; that every year&#8217;s vaccine would be effective in the smaller dose, she said.

The new study includes about 1,375 volunteers, including 1,249 Pentagon employees, with the rest coming from Walter Reed, Klote said.

None of the volunteers fall into the high-risk categories, which include people age 65 and older, children under age 2, and people whose immune systems are vulnerable. The U.S. government recommends that all high-risk people receive full doses of flu vaccine each year.

The study began with a single flu shot. Some volunteers got full doses and some half-doses, and researchers will not know who got which dose until the study&#8217;s conclusion, Klote said.

In addition to the shot, participants also had to donate a small tube of blood.

The next phase of the study is to draw another vial of blood from volunteers.

Researchers will compare the first vial of blood with the second to see whether the half-dose of vaccine prompted the body to produce the correct immune response, which peaks about three weeks after the initial flu shot, Klote said.

Volunteers are also keeping a diary of any symptoms they experience over the course of the flu season, and researchers will be in touch via e-mail at least twice over the coming months to ask participants about any illnesses.

The researchers will track the volunteers until March 31, the official end of the flu season, Klote said.

Walter Reed&#8217;s Allergy-Immunology Department, Vaccine Healthcare Centers Network, and Army Institute of Research, the Department of Health and Human Services, the Federal Drug Administration, the Centers for Disease Control and other members are coordinating the new study, Klote said Monday at the Pentagon.