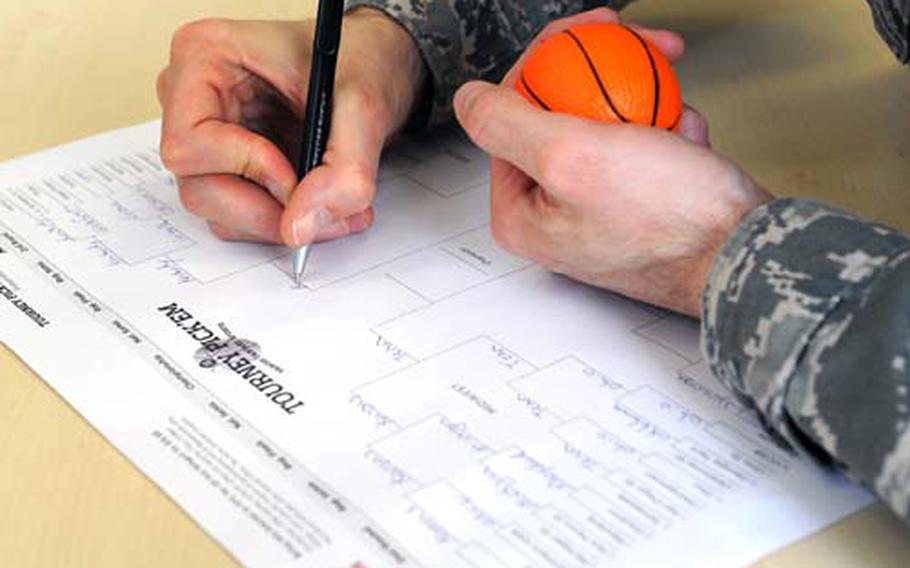 Buy Photo
Millions of Americans are scrambling to fill out their NCAA tournament office pool brackets, but the Department of Defense says office pools are not authorized or permitted, because DOD employees are prohibited from gambling while on federally owned or leased property or while on duty. (Photo illustration by Michael Abrams/Stars and Stripes)

WIESBADEN, Germany &#8212; As millions of Americans scramble to make last-minute adjustments to their NCAA tournament brackets, the Defense Department is playing the role of bracket buster before the tournament even tips off Thursday.

&#8220;Office pools on March Madness are not authorized or permitted,&#8221; according to DOD spokeswoman Maj. April Cunningham.

Joint Ethics Regulations state that DOD employees are prohibited from gambling while on duty, or in federally owned offices.

But offices are where most March Madness pools take place.

A recent survey by the Spherion Corporation estimates 45 percent of workers have participated in an office pool before, and 56 percent of those who have participated specifically took part in March Madness pools. The tournament might cost U.S. employers as much as $1.8 billion in unproductive wages during the first week of action, according to an annual survey by Chicago-based placement firm Challenger, Gray & Christmas Inc.

Sgt. Michael Metzbower with the 1st Armored Division headquarters said he is participating in five different bracket challenges this year.

The North Carolina native said basketball brackets were a part of his upbringing and, now that he lives in Germany, it doesn&#8217;t interfere with his work because the games occur later in the day. He said he also participates in several office pools, including a recent fantasy football league, where participants pitched in $2 a week.

But the military says violators who misuse government resources or participate in gambling between officers and enlisted may be punished under the Uniform Code of Military Justice or face other disciplinary actions, according to Maj. Paul Bednar, spokesperson for the 66th Military Intelligence Brigade.

Unless, that is, the gambling comes in the form of the playing the slot machines at the base bowling alleys or clubs. According to military officials, some policy exemptions exist, including the slots that generate revenue for Morale, Welfare and Recreation services.

&#8220;While servicemember demand for gambling similar to home may be one reason DOD provides slots, another reason is likely the significant amount of money they generate,&#8221; said Keith Whyte, executive director of the Washington, D.C.-based National Council on Problem Gambling.

According to figures released in 2008, annual profits from military gambling overseas total about $184 million.

The irony is not lost on the soldiers.

Plus, filling out a bracket is different than playing the slots constantly, said Staff Sgt. Wayne Washington, who was visiting Wiesbaden on his leave from Fort Hood, Texas.

In the end, while NCAA office pools are illegal, don&#8217;t expect the Army to court-martial anyone soon for filling out a bracket.

Enforcement of such gambling issues is handled at the unit level, according to Gary Comerford, a spokesman in Washington for the Department of Defense&#8217;s Office of Inspector General. The DOD does not monitor or track DOD employees participating in March Madness pools unless it is a particularly high-stakes pool or a scam.