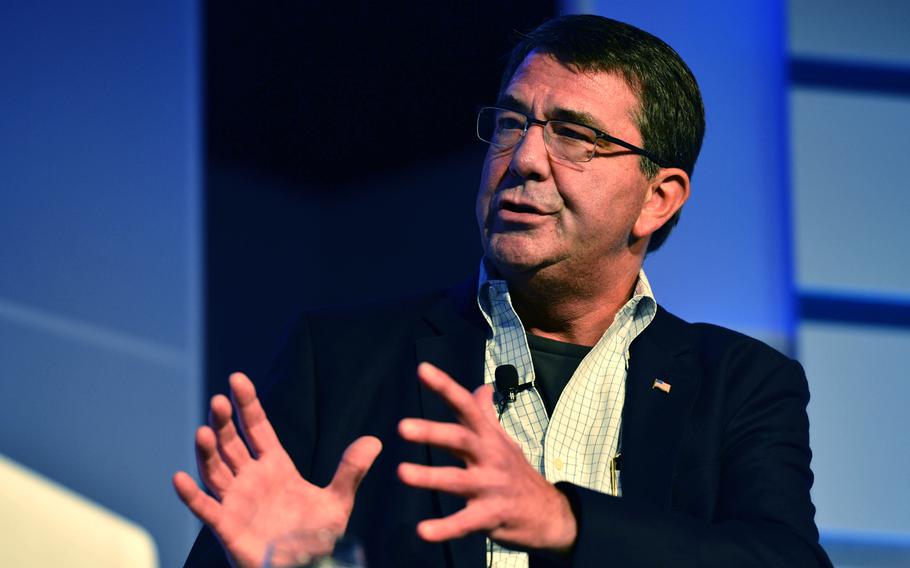 Deputy Secretary of Defense Ashton B. Carter responds to a question during a question and answer period at the annual Aspen Institute Security Forum in Aspen, Colo., July 18, 2013. (Aaron Hostutler/U.S. Marine Corps)

BAMBERG, Germany — The Defense Department cannot issue an across-the-board debt waiver or reinstate housing allowance payments to nearly 700 overseas civilian workers who were determined to be erroneously receiving the benefit, according to Deputy Secretary of Defense Ashton Carter.

In a memorandum issued Monday to the heads of U.S. European, Africa and Pacific commands, Carter said the department would not act on a request by the four-star commanders urging the Defense Department to institute a blanket debt waiver for affected employees. A request by senior overseas commanders that DOD also restore housing benefits, enabling workers to complete overseas assignments under the terms they were first hired, also was rejected.

“The Department cannot grant a blanket waiver for the indebtedness that resulted from the erroneous payments of LQA [living quarters allowance] because each request for waiver must be considered on its own merits,” wrote Carter, backing up DOD’s initial ruling on the matter.

As a result, civilian workers will have to file individual waiver requests to escape financial liability for past payments made in error.

Carter’s memo was issued in response to a request by military leaders overseas, who asked Carter to review how DOD’s office of personnel and readiness had handled the ongoing disagreement over who should be eligible for housing benefits.

Carter said that while DOD has granted a blanket one-year extension of housing benefits — a move designed to give workers time to find alternative living arrangements — DOD won’t allow the benefit to continue beyond that grace period.

“We cannot continue LQA for all affected employees until their established DEROS [date eligible for return from overseas], as that would require the Department to authorize payments identified as erroneous beyond the 1-year period of transition determined to be reasonable in this situation,” Carter wrote. “When the 1-year period of temporary eligibility for LQA ends, the pay of affected employees will no longer include this incentive.”

Affected employees and senior military commanders, who say staffers should not be punished for clerical mistakes, argue that DOD should institute an exception to policy that would allow workers to continue receiving benefits that will keep them on the job.

Many workers contend they never would have accepted an overseas assignment without a living quarters allowance to offset the high cost of living abroad.

According to State Department regulations, certain requirements for living quarters allowance eligibility can be waived under “unusual circumstances.” In his memorandum, Carter did not explain why DOD will not use that clause to restore the benefit or site any specific rules that preclude it from doing so.

Earlier this year, the Defense Department conducted an overseas audit that found 659 workers were receiving the benefit erroneously. In many cases, those workers had worked for more than one employer overseas, an apparent violation of State Department regulations that apply to DOD civilians.

Defense Finance and Accounting Services workers are now in Europe, where they are expected to spend the next several weeks meeting with affected civilians and process debt waiver requests. The team will soon move on to the Pacific.

Though the Defense Department has acknowledged the workers are not at fault, it says that without approval of a special debt waiver request, it is obligated to recoup past housing allowance payment.

The benefit is substantial, ranging from $30,000 to $50,000 annually. Some employees have balked at signing waivers, which they say could be viewed as an acknowledgement that the debt is legitimate. Such an admission could hurt in the event there is an eventual legal challenge, according to some workers.

In his memo, Carter said the department supports efforts to obtain waivers from the Defense Office of Hearings and Appeals, which makes the final decision on the waiver requests.

“Affected employees must understand that if they do not complete a waiver application … DFAS will begin to recoup the indebtedness approximately 6 months after the employee has been notified of the debt amount,” wrote Carter, who noted that if an employee applies for a waiver, no attempt at recoupment will be made during the waiver request process.

Meanwhile, hiring priority will be given to employees who are seeking new jobs in the States, where DOD components have been granted special authority to fill positions that are vacant due to hiring freezes, Carter wrote.