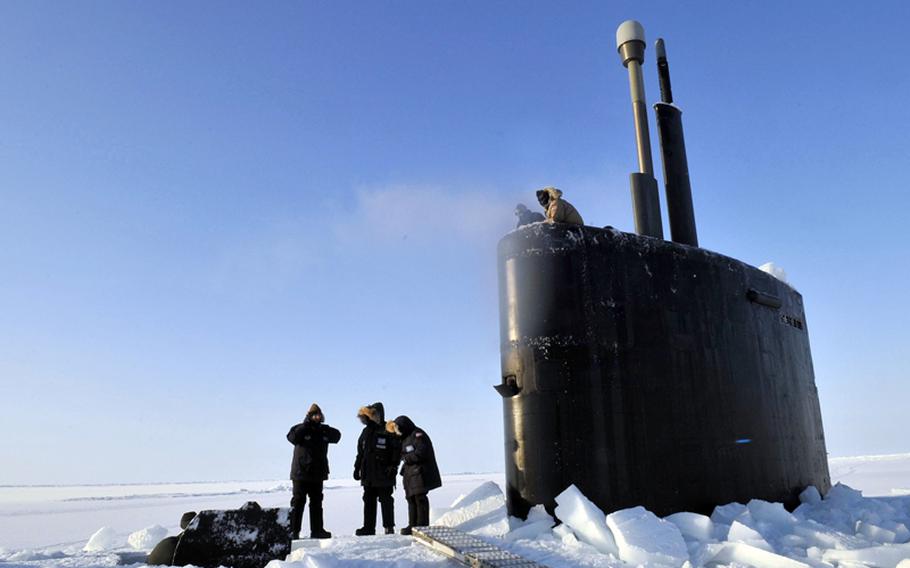 Members of the Applied Physics Laboratory Ice Station clear ice from the hatch of the Los Angeles-class submarine USS Annapolis after the sub broke through the ice while participating in Ice Exercise 2009 in the Arctic Ocean. (Tiffini Jones/U.S. Navy)

STUTTGART, Germany &mdash; The Defense Department lacks a clear strategy for ensuring it will have the resources to operate in the Arctic, which is gaining strategic importance as melting ice opens new shipping possibilities and potential access to untapped natural resources, according to a Government Accountability Office report.

While the DOD has begun to assess the capabilities needed to better operate in the Arctic&rsquo;s harsh environment, the report said, it needs to better prepare to meet the challenges of navigating in the Arctic, where the U.S., Russia and other nations are competing for control of potentially valuable resources.

&ldquo;Uncertainty involving the rate of Arctic climate change necessitates careful planning to ensure efficient use of resources in developing Arctic needs such as basing infrastructure and icebreakers, which require long lead times to develop and are expensive to build and maintain,&rdquo; the GAO stated in its Jan. 13 report. &ldquo;Without taking steps to meet near- and long-term Arctic capability needs, DOD risks making premature Arctic investments, being late in obtaining needed capabilities, or missing opportunities to minimize costs by collaborating on investments with the Coast Guard,&rdquo; which falls under the Department of Homeland Security.

In the Pentagon&rsquo;s 2011 report to Congress on the Arctic, it acknowledged that it is hampered by gaps in several areas, including radio and GPS capabilities needed to communicate and navigate in the so-called High North.

As sea ice continues to melt in the Arctic in the decades ahead, new shipping lanes could open, as could access to vast untapped natural resources beneath the ice. Such conditions have raised the strategic stakes in the High North, where potential competition for resources could pose security challenges in the years ahead.

The GAO recommended that DOD, in consultation with the Department of Homeland Security, take two steps to better prepare for the future:

&bull; Develop a risk-based investment strategy for near-term threats and a time line for addressing those risks.

&bull; Closely collaborate with the Coast Guard to avoid costly duplications of effort with other agencies, such as the Navy.

At Northern Command and European Command headquarters, officials have begun a review of the assets that will be required in the region.

In 2011, the Defense Department restructured responsibilities in the Arctic, which had been divided among three commands, EUCOM, NORTHCOM and Pacific Command. To better focus the mission, the Pentagon divided responsibilities between just EUCOM and NORTHCOM. While EUCOM manages military relationships with other Arctic nations in Europe, NORTHCOM is the lead advocate for Arctic issues within the Defense Department.

While operating in the Arctic poses challenges, Defense Department planners appear unlikely to recommend major investments in the near-term.

In its report to Congress in May, the Pentagon concluded that with the low potential for armed conflict in the region, the existing DOD posture is adequate to meet U.S. defense needs through 2030. In addition, DOD&rsquo;s report stated that DOD does not currently anticipate a need for the construction of a deep-draft port in Alaska before 2020.

Military officials at EUCOM have downplayed the potential for conflict in the region, pointing to organizations such as the Arctic Council as valuable tools for resolving disputes.

The Arctic Council is an intergovernmental organization that includes eight Arctic states. Members are: the U.S., Canada, Russia, Sweden, Norway, Denmark, Finland and Iceland. The council was founded in 1996 to promote cooperation between the countries.

In May, the U.S., Russia and other Arctic nations reached a deal to cooperate on search-and-rescue missions in the region. But much remains to be addressed by the council, including territorial claims of member nations jockeying for control of resources.

Still, GAO recommends that DOD do more to identify its future needs.

&ldquo;At this time, significant DOD investments in Arctic capabilities may not be needed, but that does not preclude taking steps to anticipate and prepare for Arctic operations in the future,&rdquo; the GAO stated.