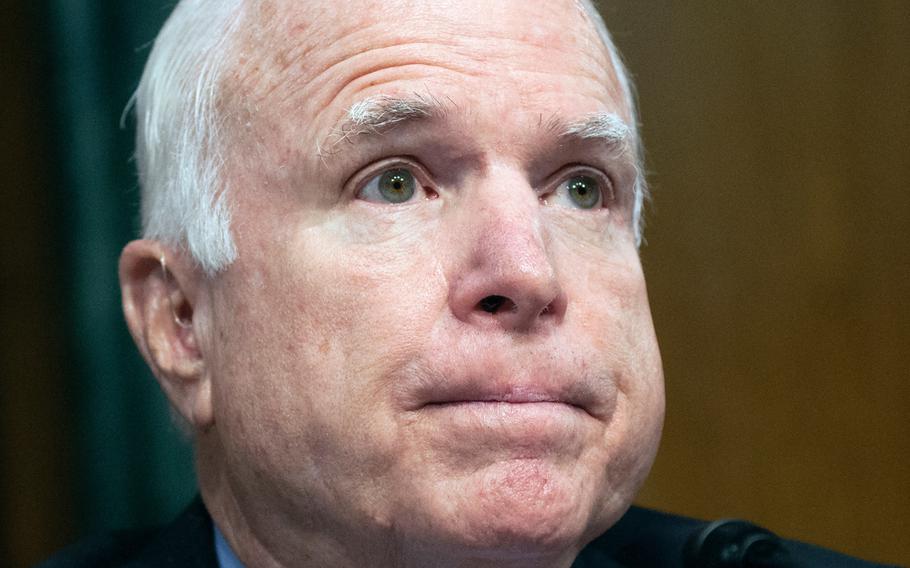 John McCain, R-Ariz., Chairman of the Senate Committee on Armed Services, addresses Pentagon witnesses during a hearing on Capitol Hill in Washington, D.C., on Wednesday, Sept. 16, 2015. (Carlos Bongioanni/Stars and Stripes)

WASHINGTON — Congress was poised Tuesday to send an annual defense policy bill to President Barack Obama, setting up a showdown that could leave the Department of Defense without a budget and hundreds of thousands of federal employees facing furloughs.

Obama will have until Halloween to decide whether to make good on his repeated threats to veto the National Defense Authorization Act, which lays out military pay and benefits. This year, the bill also includes an historic reform of the 20-year pension system, hikes in Tricare fees, protections for the A-10 Thunderbolt II and a review of troops carrying personal guns on bases.

A veto could throw the whole defense budget into uncertainty, with Congress scrambling to come up with a new plan by Dec. 11 when the current temporary budget expires. The DOD said troops would not receive paychecks and about 400,000 civilians would be furloughed if defense spending is not resolved by then.

Republicans rallied Tuesday in an effort to paint Obama and his veto threat as an obstacle to defense priorities despite increasingly threats around the world.

“If the president decides to veto this, then it seems to me he is placing a higher priority over his concern and opposition to funding budgetary mechanisms than he is over the defense of the country,” said Sen. John McCain, R-Ariz., a lead architect of the legislation.

Republican leadership in the House and Senate, intent on pressuring Obama, planned an evening signing ceremony on Capitol Hill to underscore the importance of the NDAA, which is comprised of a $515-billion base defense budget and an $89-billion overseas war fund called Overseas Contingency Operations.

The president will have 10 days, not including Sundays, to sign or veto the bill.

The White House, which repeated the veto threat last week, wants Congress to lift mandatory spending limits on defense and non-defense programs that have hamstrung lawmakers since 2011, when the Budget Control Act was passed as a way to force painful reductions in federal debt.

Obama and the Democrats say Republicans used a budgetary gimmick to skirt the cap on defense, instead of working toward a larger compromise on all spending. About $38 billion slated for the OCO fund — an emergency account created for the wars in Iraq and Afghanistan — would actually be used for daily DOD expenses as a way to keep the base budget within the set caps.

In the event of a veto, McCain said the next step would be votes in the House and Senate aimed at overriding Obama’s decision. But Republicans are not likely to have enough support to save the NDAA — the recent vote to pass the bill in the House did not reach a so-called “veto-proof” majority.

A compromise still might be possible that would allow the NDAA funding levels to remain while providing more modest increases for non-defense programs, said Michael O’Hanlon, co-director of the Center for 21st Century Security and Intelligence at the Brookings Institution, Washington, D.C.

“In other words, a Ryan-Murray bill but tilted more in favor of defense because that would essentially be a compromise between where the president is and where the congressional leadership is,” O’Hanlon said. “So, one imagines preserving the funding levels [in the NDAA] but maybe increasing the domestic accounts maybe half as much.”

McCain and Rep. Mac Thornberry, R-Texas, chairman of the Armed Services Committee, said Tuesday they could be open to increases in other government spending.

“I wouldn’t mind increases in some spending, particularly where intelligence and other aspects are concerned, the CIA many, other agencies of government,” McCain said.

A yearlong temporary budget measure, called a continuing resolution, also has been batted around as a possible solution when the current budget expires in December. But Pentagon officials oppose the unprecedented move and 102 House Republicans wrote a letter to GOP leadership last week saying they also will oppose any yearlong budget resolution — or any defense budget that does not provide at least as much as is currently in the NDAA.

The DOD warned Tuesday that the lack of a budget this winter will hit military as well as civilian personnel. About half of its 700,000 civilian workers would be furloughed.

“If the budget does not pass by Dec. 11, and we do not get another continuing resolution, there will be furloughs.” DOD spokesman Mark Wright said. “The military would stay reporting for duty every day. They just wouldn’t get paid.”