DOD out to stem backlash from incendiary video 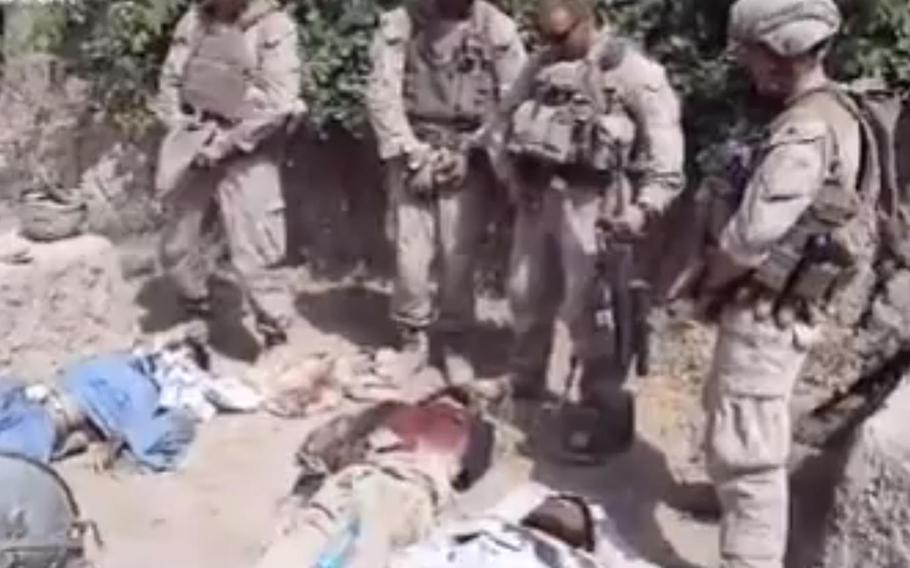 WASHINGTON - U.S. officials scrambled Thursday to temper backlash from a video appearing to show Marines urinating on the corpses of Taliban fighters, an incendiary act that could again inflame anti-American sentiment throughout the Muslim world.

Top Pentagon leaders issued a series of statements condemning the incident and promising a full investigation into the video, posted this week on YouTube. The short clip shows four men in U.S. military uniforms standing above the bodies, joking and making references to relieving themselves on the dead men.

It was unclear who shot the video, when it was filmed or who posted it online. A Corps official told The Associated Press that men in the clip were members of the 3rd Battalion, 2nd Marines, which returned last year from a deployment in Afghanistan to Camp Lejeune in North Carolina. At least two of them have already been identified, and some of the men are no longer in the battalion.

A criminal investigation is ongoing.

Commandant Gen. James Amos said in a statement that "the behavior depicted in the video is wholly inconsistent with the high standards of conduct and warrior ethos that we have demonstrated throughout our history."

Both he and Defense Secretary Leon Panetta -- who personally called Afghan president Hamid Karzai to address the incident -- promised to prosecute any troops found to be engaging in such behavior.

And punishment could be severe, according to Mat Tully, a military legal expert and a lieutenant colonel in the New York National Guard. At minimum, the four troops involved and the cameraman appear to have violated Central Command rules against proper care and acceptable photography of battlefield dead.

They also could be prosecuted under several different articles of the Uniform Code of Military Justice, and may be in violation of Geneva Conventions standards for the treatment of enemy fighters.

"I sympathize with these Marines, because you don't know what happened just before that video was taken," said Tully, who is set to deploy to Afghanistan later this year. "You don't know if they just lost a Marine, if these people had done despicable things to Americans, and this was their reaction.

"But it's also unacceptable, and they have to be punished. There's no doubt in my mind that there will be retaliatory attacks from this, and that this video is going to get Americans killed."

The incident harkens back to the infamous 2004 Abu Ghraib prison scandal, where Iraqi detainees were photographed while being abused and tormented by U.S. military guards at the facility. When the images were made public, they caused an uproar throughout the Muslim population in the region.

Tawfik Hamid, chair for the study of Islamic radicalism at the Potomac Institute for Policy Studies, said the new video could easily have the same detrimental effect on America's image worldwide.

"If not dealt with properly, this can become a powerful recruiting tool throughout the Arab world," he said. "This can aggravate the American hatred overseas, and make all Americans targets."

Taliban leaders have already begun using the video for propaganda. In an emailed statement to the Associated Press, group spokesman Zabiullah Mujahid said that "During these 10 years American soldiers have tortured our people in various ways, they have shown disrespect to the holy Quran and other holy books, they have burned our bodies, they have killed and tortured our women and children and ... have committed other hateful actions."

He asked the U.N. and other international groups to end such practices by U.S. troops.

Hamid said U.S. officials must do more than simply condemn the actions to mute the possibility of reactionary violence. That starts with an open and thorough investigation.

"If they announce that the video was fabricated, or that they can't find the men, the Muslim world will not accept that," he said. "If they could invite representatives from the region to share in the investigation, show that they respect their concerns, that might help ease the tensions."

So far, U.S. military leaders have no plans for that. Amos said a service senior attorney and general officer will work with officials from Naval Criminal Investigative Service to look into the allegations.

White House spokesman Jay Carney said that the video and the apparent corpse abuse is "deplorable, reprehensible and unacceptable," and they are following the military investigation into the incident.