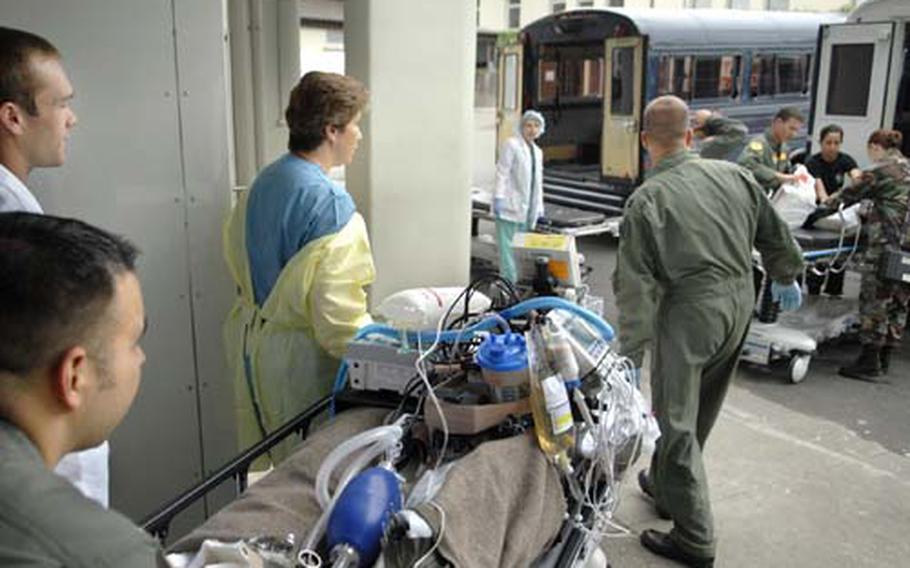 Army Capt. Karla Clarke, center, an ICU nurse at Landstuhl Regional Medical Center, assists in transporting her patient to a bus for air transport Aug. 21, 2007. The Defense Department is looking at building an Army hospital on Ramstein Air Base instead of moving ahead with plans to construct an inpatient tower at LRMC. (Ben Bloker / S&S)

LANDSTUHL, Germany &#8212; The Defense Department is studying whether to build an Army hospital and supporting facilities on Ramstein Air Base to replace the 56-year-old Landstuhl Regional Medical Center.

Last August, Landstuhl received approval for a $400 million project that, among other upgrades, would add a five-story inpatient tower to the existing hospital. Construction on the new tower is slated to begin in 2010 or 2011. But with the new study ongoing, that project now is in limbo.

The hospital is the first stop for all wounded U.S. troops coming from Iraq and Afghanistan. Military aircraft carrying wounded troops from downrange land at Ramstein, and the troops are taken by bus for the 15-minute trip to Landstuhl.

Since 2004, the hospital has treated 54,736 patients from Operations Iraqi Freedom and Enduring Freedom.

With construction set to begin as early as next year at Landstuhl, a recommendation from the DOD study would likely be issued this year, but Lein said he was unsure when the recommendation would be made.

"We&#8217;re trying to get [a recommendation] here very shortly so that we can either move ahead with building it up here or we do some interim life-safety measure changes here for the long-term build elsewhere in the Kaiserslautern military community," he said.

In addition to the Army&#8217;s Landstuhl construction project, the Air Force plans to build a medical clinic on Ramstein. The study will look at whether it&#8217;s prudent to combine those facilities on Ramstein. Landstuhl is about seven miles from Ramstein by car.

The Landstuhl hospital opened in 1953. While renovations have occurred, much of the current structure dates back to the early 1950s.

The facility operates as an Army hospital, however all branches of the military work there, including sizable Air Force and Navy contingents. The total staff is about 2,800.

The hospital will remain an Army facility regardless of where it&#8217;s located, Lein said.

"That commitment has always been there &#8212; that it will be an Army hospital," he said.

Building a new hospital and the accompanying facilities on Ramstein would be a massive project, costing hundreds of millions of dollars. The biggest ongoing construction project at Ramstein is the $170 million Kaiserslautern Military Community Center, a mall/hotel complex. The complex has yet to open, due to construction and oversight flaws that caused years-long delays.