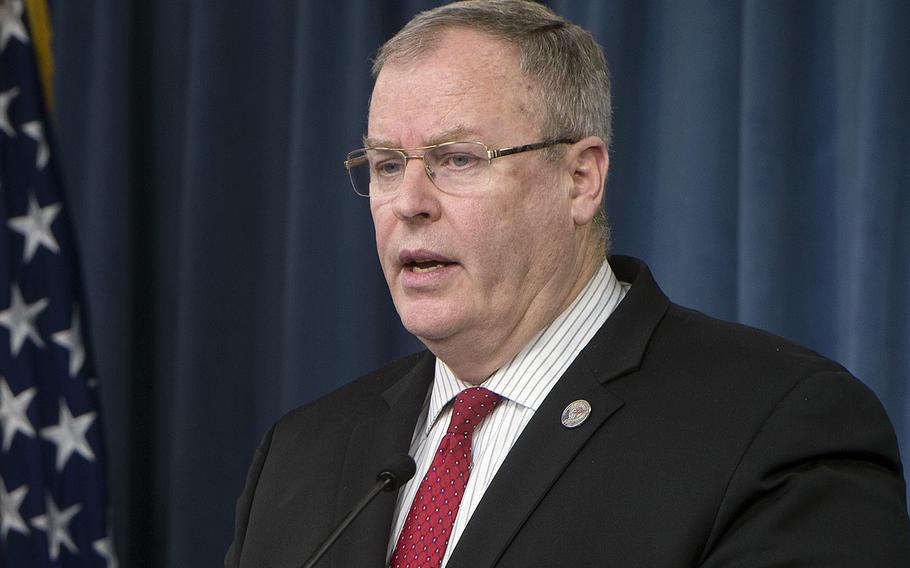 Deputy Secretary of Defense Bob Work speaks at the Pentagon, Feb. 9, 2016. During a visit to Wright-Patterson Air Force Base in Dayton, Ohio, on Thursday, March 3, Work said maintaining force readiness and maintaining equipment would be very concerning if the Pentagon's budget shrinks in the coming years. (Tim D. Godbee/U.S. Navy)

WRIGHT-PATTERSON AIR FORCE BASE, Ohio — Deputy Secretary of Defense Robert Work said Thursday he is concerned about being able to repair or replace equipment worn from 15 years of war as the Pentagon reshapes the military for the high-tech conflicts that could lie ahead.

Work was at Wright-Patterson Air Force Base to encourage minority middle school- and high school-aged boys who are excelling at science, technology and math to consider the military as a career. The visit is part of a White House initiative across the United States this week to bring minority children into federal technology research labs and show them what type of opportunities there are.

During his talk to entice the school kids, Work spoke about how a career in the military could lead the young men to working on “some very cool stuff,” including stealth bombers and unmanned systems.

“We’re developing sophisticated robots...They’re designed to do some of the most dangerous tasks, taking humans off of the battlefield. They’ll go in and defuse bombs. They’ll go in and find out where terrorists are hiding,” Work told the group of about 75 students.

The Pentagon has repeatedly said it has to move into these future weapons systems in order to defend against a rapidly modernizing Russia and China, and Work’s visit coincides with a weeklong trip by Secretary of Defense Ash Carter to the West Coast, where Carter continued to promote a stronger partnership between the high-tech Silicon Valley and Defense Department security needs.

But Carter’s desire to modernize U.S. forces has run into challenges. Despite an end to major combat operations in Iraq in 2011, the military has not seen a pause in demand, and the push to modernize is coming at a time when the military has significant operations and maintenance needs. Not only have forces returned to Iraq, but the military also has had to dedicate more resources to meet potential threats in Europe and Asia. The increased demand has left the military with less money and time to do needed maintenance and training on jets, helicopters, vehicles and warships.

For example, Gen. Robert Neller, commandant of the Marines, was pressed Wednesday by the Senate whether continued cuts to the Marines’ readiness accounts was responsible for a high number of helicopter crashes in the last year, including the Jan. 14 crash in Hawaii. Neller said the funding cuts have reduced flying hours and made fewer aircraft available for training. Neller called the CH-53 Super Stallion used by the Marines as “the most challenged.” The two helicopters that crashed in Hawaii after colliding were Super Stallions.

On Thursday, Work said the strain of refurbishing worn equipment is a problem.

“We’ve been at war for 15 years,” Work said. “The strain on our men and women and our equipment has been enormous. So keeping this equipment going at such a high operational tempo is very, very challenging.”

Work said this year’s budget “meets all the basic criteria” to maintain readiness,” but if the Pentagon’s budget is cut further, the force could face difficulties.

“I’d say there’s concern, but not overt concern” about the ability to modernize forces while maintaining equipment, Work said. But if the Pentagon’s budget is reduced in the next few years, “we will become very concerned.”